Here's to glitz and glamour, sequins and splendour. Ladies and gentlemen, La Cage Aux Folles is in town! In this colourful rendition by W!LD RICE, Harvey Fierstein and Jerry Herman's 1983 Tony Award-winning musical about a drag club run by two gay men has been relocated to Singapore's eclectic Tanjong Pagar district. The result is a funny, touching and supremely entertaining spectacle that deserves pride of place in our local theatre calendar. 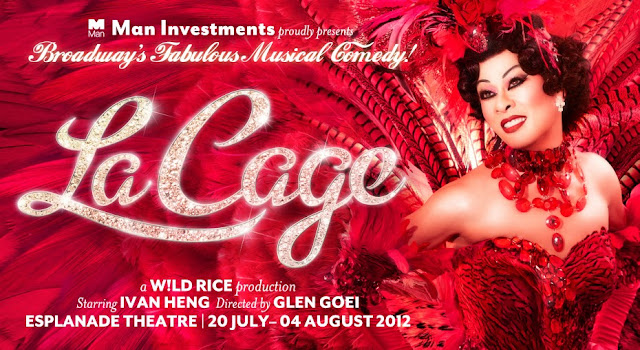 La Cage is supported by a strong cast. Malaysian actor Tony Eusoff, who makes his Singapore stage debut, is suave and charming as George and displays both lightness of foot and a rich, velvety voice. Aaron Khaled, also joining us from across the Causeway, turns in a very assured performance as George's son Jonathan, though his acting appears a little tentative compared to his impressive singing.

The star of the show is, without a doubt, Ivan Heng as George's partner Albin (aka Zaza, the cabaret's chief attraction). His Albin fuses elements of a feisty Peranakan housewife, flamboyant diva (he is particularly noteworthy in the song Masculinity where he learns how to act like a real man) and deeply loving parent. Even if Heng's vocals do not quite soar like some of the others, it's hard to fault him in a performance to which he devotes himself so wholeheartedly. He comes into his own in the musical's signature number I Am What I Am at the end of the first Act and it's hard not to be moved not only by the character but by the remarkable man playing this role and his amazing contribution to local theatre over the years.

Glen Goei's production also excels in bringing out the many comic elements of the book. Hossan Leong is a veritable scene-stealer as the butler/maid Jacob who nurses a not-so-secret desire to appear on the cabaret show and has the audience eating out of his hands with hysterical one-liners. There is very good work by Darius Tan and Karen Tan as ultra conservative politician Mr C. K. Tan and his wife, on a rampage to purge the city of "deviants". Finally, Andrew Lua and Judee Tan bring in the laughs as a chatty, Hokkien-speaking couple running the local coffee shop.

A large part of what gives La Cage its flavour is the appearance of the characters and kudos to costume designer Frederick Lee and the make-up team for doing a truly phenomenal job in bringing the glitzy world of the cabaret to us. I kept trying to guess which of the twelve Cagelles were real women and ended up failing miserably. The hats, gowns and exquisitely feathered accessories worn by Zaza and her posse of Cagelles are all gorgeous and this has to be the most fabulously costumed production I have seen this year.

The only aspect of the production which didn't quite live up to expectations was the set design. CK Chia has done some very good work for W!LD RICE previously and I enjoyed both the flamboyance of his designs in Aladdin and stark minimalism of the aesthetic in Romeo and Juliet. By comparison, Chia's sets for La Cage seemed a little underwhelming. The cabaret-esque pieces for the scenes set in the club were good but the coffee shop and apartment sets were rather basic and uninteresting and I was hoping for something a little grander. That being said, I loved how the sculpture of Michaelangelo's David in George and Albin's living room was replaced with a giant crucifix and statue of the Virgin Mary to set a sombre tone in a later scene.

At its heart, La Cage is a play about being true to one's identity and the strength of family and on both these counts, W!LD RICE delivers richly. Indeed, coming so soon after this year's monumental Pink Dot, this performance of La Cage is a glittering reminder to all of us about celebrating the freedom to love.