The latest addition to the impressive line-up of musicals that have been gracing our shores is all about a little red-haired girl. And she has a big heart.

Annie is based on the 1920s comic strip Little Orphan Annie by Harold Gray. The story is a simple, heartwarming one: a fun-loving girl living in a dreary orphanage in New York City enters the life of lonely billionaire Oliver Warbucks, breathes colour into his life and eventually gets adopted by him. It was a big hit on Broadway back in the 1970s and audiences may recall the popular 1982 film version. This UK touring production by Roger Hannah pulls out all the stops to deliver a fun-filled evening for the entire family. We have the large, colourful cast of characters, Charles Strouse's jaunty score and of course, the delightful dog Sandy. 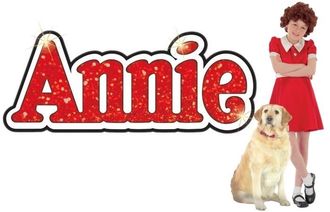 One of the most enjoyable parts of the show is watching the orphans – all local talents – who form Annie's chorus. Opening number Hard Knock Life is full of energy, even if not perfectly executed. I couldn't take my eyes off little Molly, who steals all the scenes she's in. Of course, the star of the evening is rightly Annie, played on opening night by the talented ten-year-old Ella Crossland. I would have liked her to display just a tad more playfulness in her role but she certainly does a fantastic job, boasting confident vocals in signature songs Tomorrow and Maybe and lighting up her scenes with a mixture of childish petulance and emotional maturity.

Two UK stars also headline this production. Veteran actress Su Pollard is suitably amusing as the misanthropic and permanently inebriated orphanage matron Mrs Hannigan, pottering about in raggedy clothes and excelling at moments of physical comedy. West End and television actor David McAlister brings both charm and tenderness to Warbucks. The supporting cast members also do a good job and there is good work by Antony Reed as the stoic butler and Simone Craddock as the kindly personal secretary of Warbucks who takes an immediate shine to Annie. 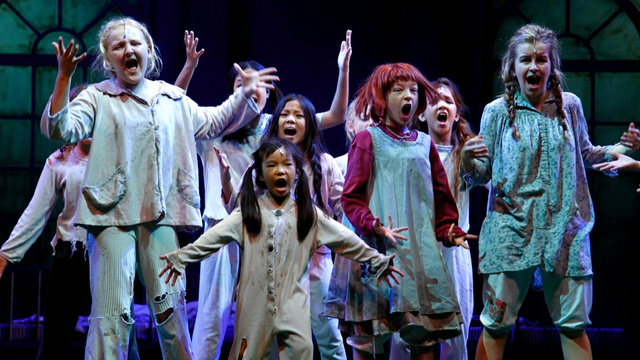 I found myself less convinced by the scenes highlighting the widespread poverty and unemployment in post-Depression New York and President Roosevelt's plans to revitalise the flailing economy. These are solid, weighty themes but they somehow feel like a footnote in a musical which, at its heart, is a story of a little girl who brings joy to a rich man. In one scene, Annie accompanies Warbucks to visit Roosevelt at the Oval Office, and apparently singing about a brighter tomorrow is all that is needed for him and his team of aides to decide how to press on with optimistic economic reforms. It seems a little trite.

Indeed, Annie could either have been a happy, fluffy musical about a girl finding a place she calls home or a much deeper, grittier show about the harsh effects of the Depression and its toll on everyday people. It seems slightly awkward in tone when it tries to be both at once. That being said, these piecemeal scenes that draw upon the economic milieu are very well done. Joe Connors excels as a practical, avuncular Roosevelt and I enjoyed the deliciously satirical number We'd Like To Thank You, Herbert Hoover sung by a group of homeless people railing about their dire living conditions.

In typical Broadway fashion, the production boasts impressive sets and costumes. The Warbucks mansion, filled with detailed reconstructions of famous paintings, reminds one of a gallery in the Musée d'Orsay. I rather liked the huge replica of Rodin's The Thinker sitting majestically in a corner of the living room (and looking rather like Warbucks). Scene transitions are smooth and varied, from the delightful nod to the vaudeville-era in N.Y.C. to the gorgeously decked out ballroom and Christmas tree in the finale sequence. 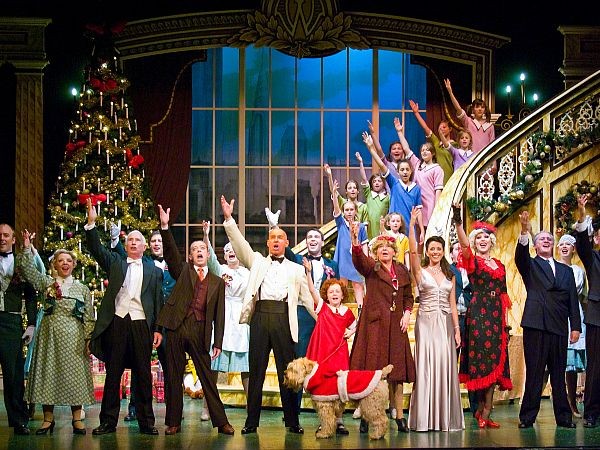 There is generally good direction and choreography by Hannah but there are elements of the show that come across as extremely rehearsed, almost to the point of artificiality. I longed for more quirky, offbeat scenes that did not constantly strive for flourish. Sound quality also proves wanting at times; I could barely hear Pollard as she sang the savage Little Girls and the voices of the orphans occasionally sound garbled.

Ultimately, Annie is a musical that will go down tremendously well with the kids or anyone after a colourful, entertaining Broadway spectacle. Adults may not buy into its rose-tinted politics but really, when you are faced with kids this adorable, you can't help but clap along.