The Wars of the Roses


John Barton and Peter Hall's The Wars of the Roses is a truly epic theatrical event, presenting over sixty years of troubled English history on stage in an electrifying performance. It condenses the three parts of Shakespeare's Henry VI into two plays (titled Henry VI and Edward IV) and combines this with Richard III, the fiery climax of the fifteenth-century battle between the houses of York and Lancaster - symbolised by a white rose and red rose respectively. 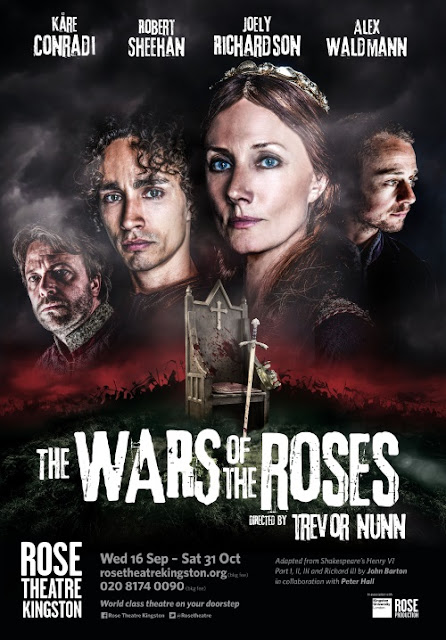 This mammoth Shakespearean pastiche, demanding of actor and audience alike, has not been revived since it was first staged by the RSC in 1963. Veteran director Trevor Nunn rises magnificently to the task of resurrecting the tale in this crisp, compelling production, playing for a limited six-week engagement at the Rose Theatre in Kingston.

One has to acknowledge the tremendous work put in by John Barton in condensing, transposing and supplementing the original text into these tailored theatrical delights. The action, particularly in Henry VI, truly flies off the page. There is a tendency for the original Henry VI plays to drag due to the lengthy exposition and complex web of characters and it is a testament to Barton's skilful adaptation that one is able to follow the plot so easily and remain riveted.

A major benefit of seeing these three plays in a trilogy day is the sense of history literally shaping up before one's eyes. We see Margaret of Anjou as a beautiful French princess who marries Henry VI despite being in love with another man. Over the years, she grows into a steely warrior queen with a man she does not respect, witnesses the death of her only son in battle and gets banished from the country. This makes her appearance in Richard III as a caustic hag far more poignant: we have seen all she has been through. Likewise, we trace the rise of that most dastardly of rulers, Richard III. He first appears in Edward IV as an overlooked third son of the Duke of York, a handicapped boy who is swift of sword and fiery of tongue. We are almost taken by surprise when he bursts squarely into the action, becoming the Machiavellian monster who inveigles his way to the throne.

This element of continuity in the storytelling is aided by having the same actors play these characters. Watching these plays in succession is akin to devouring a Shakespearean 'box set' and helps to establish recurring themes and plot developments. We gain an immediate context that would simply not be there if the plays are seen in isolation. One is alive, more than ever, to the continuing cycle of violence that is carried on through the generations and the ease by which people are swayed by a charismatic leader, only for this to end in disaster. Richard III, in particular, gains tremendously in texture from this staging: we finally understand all the references to past events that are being made.

The set by John Napier and Mark Friend emphasizes war and pageantry, its imposing three-tiered platform handsomely adorned with candles and coats of arms. Paul Pyant's lighting makes for beautiful tableaus; the tightly choreographed fight sequences feature flashes of strobe lighting while the burning at the stake of Joan of Arc is suggested by a powerful burst of red. Nunn utilises the space very well to achieve both intimacy and spectacle: actors snake onto the stage from the wings of the theatre on more than one occasion, giving the action a thrilling, three-dimensional energy. Unlike his recent productions such as Rosencrantz and Guildenstern are Dead which suffered from a somewhat languid pace, the action hurtles on with a breathless vitality.

There is great work by the large ensemble cast who effortlessly juggle a variety of roles. Alex Waldmann is excellent as a twitchy, pacifist Henry VI who never quite feels comfortable in his royal role. Alexander Hanson  turns in beautifully restrained performance as the Duke of York and wrenches the soul with his grief when confronted with the death of his youngest son. Joely Richardson is striking as Queen Margaret, powerfully conveying the transition from youthful vigour to aged bitterness. And Robert Sheehan, in a terrific Shakespeare debut, gives off an explosive performance as Richard III, quite possibly stealing the show with his bouts of hobbling mania.
﻿

It's only natural that in a marathon theatre event such as this - stretching for nearly twelve hours when seen over the course of a day - there will be some unevenness. One is assaulted by so much action and plot movement in the first half of Henry VI that the rest of the play feels strangely dry. Edward IV starts slow but builds steadily to a thrilling climax. Richard III emerges somewhat weaker than the first two plays as it is weighed down by actual Shakespearean verse unlike the hugely edited, prose-driven earlier plays and because energy levels amongst the cast, by this point, have dipped.

Yet, magic in the theatre sometimes derives from sheer ambition. It is in the power of a story compellingly told before a rapt audience. It is in the thrill of emerging, dazed and wondrous, from an onslaught of power, politics and passion. And for this, Nunn's Wars of the Roses is a theatrical feat that is unlikely to be forgotten for many years to come. One hopes it would not be another half century before this tale is told again.