Snake in the Grass

A rare 2002 Ayckbourn play about women and abuse, a maverick director whose visceral production of Julius Caesar was one of the highlights of the recent RSC season and finally, a new and atmospheric venue. Indeed, there were many things going for this production. The Print Room, a converted Fifties warehouse nestled in the heart of Notting Hill, was opened by Lucy Bailey and Anda Winters back in 2008. Making one's way there is like heading over to a friend's place for a cosy dinner party, the unobtrusive entrance lined with candles.

The most stunning aspect about this production of Snake in the Grass is the way the theatre space has been utilised. The play is set in a garden, near a disused tennis court. Bailey's production moves the action right into the tennis court itself with the audience seated on either side of what was once the net. This is an inspired choice; sitting directly opposite members of the audience gives one the feeling of being joint spectators of a verbal tennis match. William Dudley's impressive set design includes rusty grilled fences covered with creepers, peeling rubber floors and an old umpire's chair, completing the scene of decay and neglect. 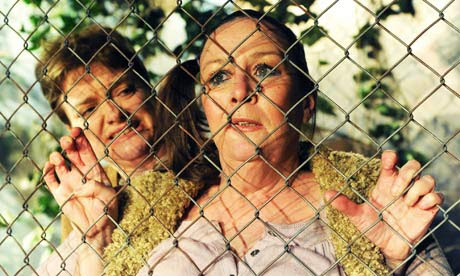 Branded as a "psychological thriller" with sinister, ghost themes, Snake in the Grass is far from conventional Ayckbourn. For starters, there is a cast of just three and all of them are women. The play begins with middle-aged Annabel (Susan Wooldridge) returning to the home of her recently-deceased father after years abroad in Australia. She is confronted by her father's ex-nurse, Alice (Mossie Smith), who informs her that her sister Miriam (Sarah Woodward) allegedly murdered the old man and demands a hefty amount of money in exchange for her silence. When the mousy Miriam finally appears, Annabel discovers to her horror that all this is true and soon becomes embroiled in a dastardly plan to keep Alice's mouth shut.

Wooldridge's Annabel is all business-like efficiency, wanting to deal with the aftermath of her father's death with as much emotional detachment as she can muster. Woodward's Miriam, on the other hand, is a frail creature who bursts into tears as soon as she enters the scene, collapsing on a chair in a sniffling wreck. Coupled with Smith's vindictive, blackmailing nurse character, the opening scenes smack of a slightly tired daytime soap. Even as Annabel grows increasingly unsettled by the ghosts of her past and Miriam evolves into a hardened, vengeful soul desperate to shed the good-daughter image she had played her entire life, this volte-face seems too artificial. The performances of the actors are competent but lack any real emotional resonance.

There seems to be a clear aim on the part of Bailey to highlight that this is a play about women and their abuse at the hands of men. There is the physical abuse which Annabel suffered as a child with tennis balls being hurled at her by an impatient father, emotional abuse which she suffered later in life as a battered wife and most poignantly, the sexual abuse Miriam endured as a teenager from her father. Ayckbourn's plays very often highlight man's inhumanity to women in marriage and family relationships but this is one of the rare times that the nature of such abuse is made so painfully manifest. 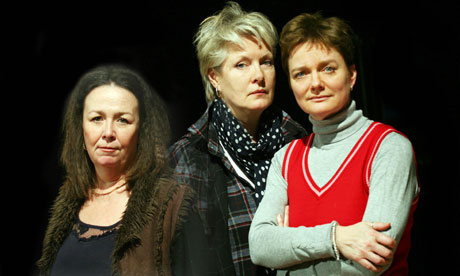 All this is perfectly fine if not for the very conscious attempt on the part of Bailey not to emphasise the natural comedy that so often seeps through an Ayckbourn play. Ayckbourn's recent Life of Riley dealt openly with the prospect of death but maintained a comic vigour as the main character tried to live life to the fullest in his final days. This production, by contrast, offers very little comic relief except for one or two odd moments. When a horrified Annabel asks Miriam if she had indeed quadrupled their father's dosage of pills and pushed him down the stairs, she calmly replies, "It was only a little push". There is also a memorable scene when the sisters attempt to drag a drugged Alice and throw her down a well, struggling with the weight of her body in an awkward comic tango. However, for the most part, the tone is kept solemn and dark as the play progresses.

In classic Ayckbourn style, some of the most significant revelations about the characters are made in an offhand manner. In a disturbing midnight chat, Miriam reveals that she secretly enjoyed being touched by their father because he had never let her form a relationship with anyone and it was the closest she had gotten to being physical with a man. It is also particularly tragic that Annabel left home years ago to distance herself from an abrasive father only to be saddled with an abrasive husband halfway across the world. There is a tremendous compassion which Ayckbourn invests in his women characters and Snake in the Grass is one of those plays which manages to powerfully convey this. We realize that these sisters are who they are because of the circumstances that have shaped them.

While it's difficult to be bowled over by the plot twists, Ayckbourn must  be applauded for his versatility. Attempting a thriller which feels rather similar in vein to Ira Levin's Deathtrap is a major change from his domestic comedies and there's a lot of potential in the material even if the execution is rather weak. My major gripe was the play's final scene: as Miriam dances in the silver party dress she wore as a teenager, having finally rid herself of all the people in her life, she is still confronted by the spectre of her father's ghost who seems to stare at her from the chair in the middle of the tennis court. In Bailey's production, an actor playing the father suddenly appears in this final scene, unbuttoning his trousers as her stares at her dancing. The literalism feels too heavy-handed.

Ultimately, the best thing to take away from this production of Snake in the Grass is the chance of seeing a very different type of Ayckbourn play, one that doesn't shy away from exploring the plight of women and how they live in the shadows of men all their lives. The venue and staging are brilliant and I have no doubt that The Print Room has the potential to become a great fringe theatre venue in central London. Bailey's approach to the script however lacks the softer comic vein that so many Ayckbourn plays thrive on. Perhaps her focus on big-name theatre and violent, arresting scenes in the past made her try to be as explicit as possible in presenting the play as a feminist, or perhaps anti-feminist work. Yet, as always with Ayckbourn, less is infinitely more.