In Equus, Peter Shaffer gives us a play that is both classically theatrical and wonderfully contemporary. First staged in 1973, this brilliant revival by Thea Sharrock naturally attracted much attention, starring Daniel Radcliffe of Harry Potter fame and Richard Griffiths, fresh off the West End and Broadway stage with his acclaimed portrayal of Hector in Alan Bennett's The History Boys.

Richard Griffiths is in top form as child psychologist Martin Dysart. Despite his often lengthy soliloquies, he manages to inject a powerful range of emotions in even the simplest of lines. His Dysart blends frustration, concern and vulnerability with theatrical finesse. Daniel Radcliffe makes a competent stage debut as disturbed teenager Alan Strang and though the role is a difficult one to grapple with, he acquits himself decently and maintains a raw energy throughout that keeps the audience on edge. Many comparisons have been made with Harry Potter and while one cannot completely disagree, Radcliffe does indeed make a genuine effort to break away from the popular wizard character into a boy who possesses a very different kind of magic. After all, in both Potter and Strang, we are dealing with the grim, troubled boy who never saw the world in the same way as others of his age. 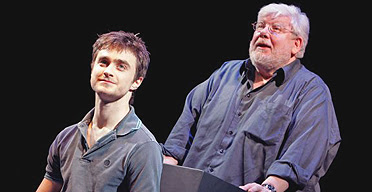 The much talked about scene at the end of the play where Radcliffe goes nude does seem a tad gratuitous and it may be rather strange for Radcliffe, just 17, to choose such a physically arresting stage debut. Yet, so powerful is the narrative of Shaffer's play that we cannot wish the physical and emotional dénouement to be portrayed in any other way. The violence, the nudity and aggression all seems eminently appropriate.

Thea Sharrock captures the essence of Shaffer's play beautifully, allowing the numerous scenes to blend seamlessly into each other. The original set envisaged by Shaffer - a square ring within a circle - is largely retained and accentuated through the use of superb lighting effects. Four black boxes on the stage function as a variety of props such as chairs, tables, beds, couches and a haystack. In line with the black set and props, the actors dress in mainly dull, greyish shades and are never ostentatious. The characters are allowed to carry the narrative in every sense. 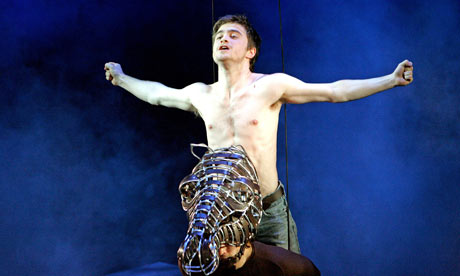 John Napier's original 1973 horse designs, by turns majestic and menacing, still make a striking presence after some 34 years. At the start of the play the light faintly glints off the silver masks in the background, arresting the audience almost instantly. The actors playing the horses maintain a strict, ritualistic approach with the masks, putting them on in perfect sync and smoothly making the transition from man to beast. Particularly memorable is the end of Act I, where the six horse masks suspended in the air slowly descend on the stage as Strang rides on his favourite horse Nugget in wild, reckless fervour.

Equus has that unique quality of being a play that is theatrical in the purest sense. It shocks, it questions and it confronts. It pits the individual against society, reason against passion and above all, explores the essential conflict between head and heart.