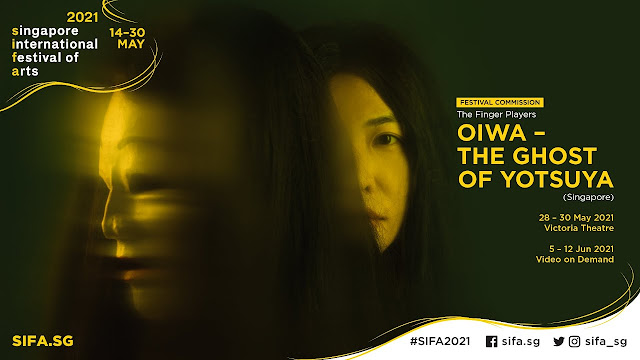 This tale of a vengeful female spirit is given a far more sympathetic retelling in Chong’s version where we learn the backstory of the Lady Oiwa and reasons that led to her becoming the frightening, demonic figure she is commonly associated with.
Set in Edo-period Japan, the plot focuses on a crippled man named Tamiya who sets his sights on Aiko, the beautiful daughter of the richest man in town. Consumed by greed, he kills her father in his sleep and makes it look like an accident. The grief-striken Aiko soon dies, and her younger sister Oiwa asks Tamiya to marry him. Even though her does not love Oiwa, he agrees, not wanting to relinquish his grasp on the family fortune.
Oiwa proves herself to be a selfless and steadfast wife but despite her willingness to submit everything to Tamiya, he is never truly satisfied. Goaded on by villagers who fear her constant cries during pregnancy and instigated by his friend Naosuke, he kills her after extracting the location of the family vault and promptly remarries. Tamiya is then haunted by the ghost of the scorned and maligned Oiwa.
Chong brings a scale and substance to the production that easily rivals some of the best Japanese works we’ve seen in Singapore to date such as Simon McBurney's Shun-Kin or Yukio Ninagawa's Kafka on the Shore. All the production elements augment each other to create a truly mesmerising experience.
Chong keeps us engaged with stunning visual tableaux, aided by set designer Wong Chee Wai and a stellar creative team. The arresting opening sequence with drums, a foreboding ghost figure and descending bamboo sticks sets the stage for a true treat of the senses. Simple effects like water, blood or fire are evoked through coloured ribbons. Sliding doors snake across the stage in a manner reminiscent of Stephen Earnhart & Greg Pierce's lavish stage adaptation of Murakami's The Wind Up Bird Chronicle.
Lighting designer Lim Woan Wen fills the stage with dusky and evocative washes of light while Darren Ng's traditional soundscapes echo the haunting atmosphere. There is also excellent puppet and mask design by Ang Hui Bin, Myra Loke and Daniel Sim that augments Max Tan's ornate, expressive costumes. Keeping to its roots in puppetry, the company infuses the play with bunraku elements where the actors manipulate full-sized puppets. There are other rich nods to Japanese culture through the use of percussive drum beats and traditions from kabuki and ningyo buri.
Considering this is a fully Singaporean production, one cannot help but wonder if it needs to be performed in Japanese by Japanese actors? Chong’s Hitler plays, for instance, were all in English rather than German. At two hours without an intermission, the action also feels a little protracted and an interval would have certainly helped audiences to unwind from the sensory overload.
Oiwa is a magical, mesmerising treat for the senses and the crowning glory of The Fingers Plays repertoire after more than two decades in the industry. It's the sort of production than easily puts one on the international theatre map and one can only hope that we get the chance to revive this fine work in the near future so that more audiences can enjoy this.
The Crystalwords score: 4.5/5
Labels: chong tze chien drama finger players play singapore festival of arts singaporean theatre