What if a painting by Hitler were to be discovered today? Would it alter the world's view of the dictator? Playwright and director Chong Tze Chien continues his flirtation with the Führer in this taut, intriguing drama, teasing out issues of truth and falsehood alongside discussions of artistic merit.

While Chong's 2016 play Starring Hitler as Jekyll and Hyde was squarely based on the man himself, seeking to reconcile the idea of Hitler as a struggling artist fighting for recognition alongside the image of him as a tyrant, he is merely a backdrop here to another riveting human tale. 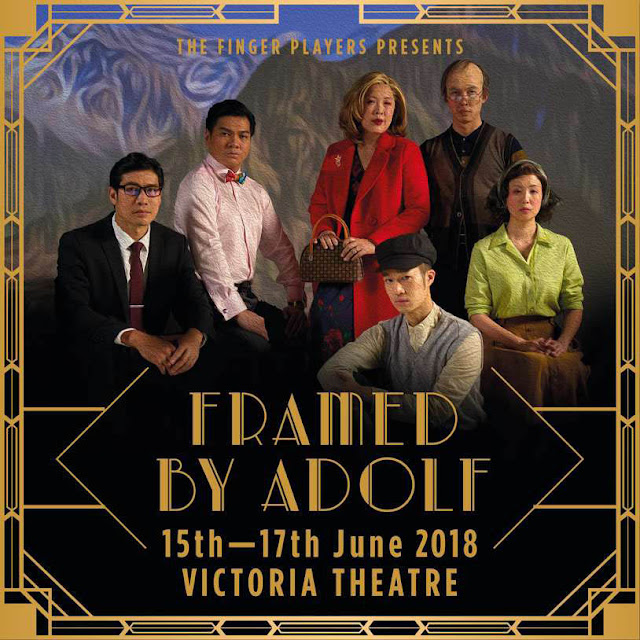 A woman seeks to sell a painting of Hitler's she inherited from her grandfather. This Seller pursues a renowned art professor, imploring him to authenticate the work, while courting an auctioneer and wealthy buyer to seal to deal.

When pressed to reveal the story behind the artwork, she tells us how her grandfather, a Jewish butcher's assistant called Abdown Benjamin Yisrael, had purchased the painting from Hitler, then a young artist. As the Jewish community is increasingly persecuted under the Third Reich, Abdown is forced to flee his uncle's shop. He encounters a terminally ill young Gentile, assumes the latter's identity following his death, and through a series of unfortunate circumstances, finds himself as a Nazi soldier who is later tried for war crimes.

Yet the story is far from clear-cut. Is Abdown - described as The Victim - truly blameless? Has he simply been 'framed' by Hitler for owning the latter's artwork or is he at fault for allowing himself to be inducted into the dastardly Nazi world? Characters are rarely what they seem, forcing us to evaluate our version of the truth. We ponder the motives of the Seller as she takes pains to get the painting authenticated and the specific reason she tracked down this particular buyer.

Framed is carried by Joshua Lim's powerful performance as the hapless, autistic Abdown, a simpleton who takes what is he told too literally. Lim's performance as the bipolar Hitler two years ago won him kudos and he proves equally riveting here, convincingly portraying a man who is forced to live a lie in a desperate bid to survive. He is supported by a talented ensemble comprising Serene Chen, Tan Shou Chen, Timothy Nga, Darius Tan and Zee Wong who play an assortment of supporting characters, each coloured by their own motives and prejudices.

Interestingly, Chong makes no attempt to have his cast put on accents to evoke characters from the era. All the actors speak in their natural Singaporean voices and it's refreshing to see a local company boldly taking ownership of a pivotal aspect of world history. And, after all, why shouldn't we be able to tell this story? At its heart, Framed is about the tiny facts and fictions that shape us as individuals and it's a tale that could just as easily unfold in any community around the world.

Just as the painting in question is revealed to have two sides, we are forced to consider that there are two versions of the truth. This is driven home on a meta-theatrical level: we see each actor getting ready prior to the start of the play and each of them is introduced in turn. The Seller's narration of the tale keeps us aware that this is a story as she chooses to tell it and she even slips into the tale by playing secondary characters along the way. Does the story  therefore become less authentic because of how it is framed before our eyes? Similarly, does art only derive its value based on its provenance and price tag or instead of its intrinsic worth?

Chong works with a talented team who draw on the The Finger Players' fine tradition in shadow puppetry. Chan Silei's minimalist set is dominated by a large, blank wall which forms a canvas for live puppeteers Ang Hui Bin, Myra Loke and Daniel Sim to project images which beautifully sets the tone of each scene without the need of anything further than our imagination.

In a standout sequence, we see Abdown clattering along on a train while images of buildings and landscapes swim in and out of focus, augmented by beautiful light and sound effects from Lim Woan Wen and Darren Ng. Not all aspects of the staging work though; the image of different parts of a human ear being illuminated as the Seller converses with the three stakeholders feels a rather heavy-handed way of indicating that people choose to hear what they want.

The Finger Players have put together another thoughtful and well-executed production that forces us to consider how objective truth may be framed by emotional and moral forces. Some of the themes here are perhaps too weighty to be dealt with in a single play but it's an admirable attempt that leaves us with plenty of food for thought. One would certainly be inclined to not to take everything at face value the next time one ventures into an art gallery.