If you think things can't get more provocative than the title of this show, you have another tinkle coming. Urinetown is gritty, grimy, potty and, obviously, pissy. The Tony Award-winning musical by Greg Kotis and Mark Hollman takes toilet humour to a whole new level and plays out with feverish energy like a live action cartoon.

It's set in a dystopian city where water shortages have made it impossible for people to have private lavatories. Citizens are forced to pay for the "privilege to pee" in public facilities controlled by a private organization - the Urine Good Company (UGC) - which is run by a ruthless businessman who has both politicians and the police in his pocket. When the UGC announces yet another unsolicited price hike, the beleaguered masses stage a revolt and chaos ensues. 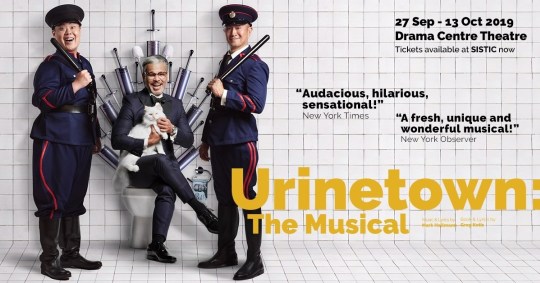 Alongside this mayhem, Urinetown sets out to heartily roast the genre of musicals itself. Co-narrators Officer Lockstock (Adrian Pang at his snarky, scene-stealing best) and street urchin Little Sally (a wide-eyed Mae Elliessa) cheekily break the fourth wall, commenting on various off-putting aspects of musical theatre, from an overload of exposition to overwrought finale sequences and badly chosen titles. Scenes brazenly reference popular musicals with Broadway icon Les Misérables being a chief target; in the revolt scenes, characters brandish posters with slogans like "Do You Hear the People Pee?" in naughty reference to one of its most enduring songs.

Director Tracie Pang stays true to the text but there are various attempts to bring the story closer to home with loaded references to a despotic founding father and cross-border water crisis. While some of these touches are rather clever like the pay to pee tax being shrewdly renamed Economical Relief Pricing (ERP) and a nod to the Hong Kong protests with a lady brandishing her umbrella against police fire, the over-emphasis does feel heavy-handed at times. There's only so many times one needs to be told about this being "the most expensive city in the world". I rather preferred the subtle digs at politics and class that emerged in the company's stirring production of Late Company earlier this year.


There's no denying that the ludicrous conceit in Urinetown conceals a pungent satire of capitalism, class and sustainability. Substitute the right to pee with, say, freedom of speech and one are suddenly confronted with a sobering reality. Should individuals be held to ransom by the state and be denied of their basic rights? We return to the theme which PANGDEMONIUM has been exploring all year: how, in this modern world, we remain more alienated than ever from others. If the political shenanigans playing out across the globe are anything to go by, we still have not learnt how to conduct ourselves properly and treat others with the respect they deserve.

These are real issues that absolutely need to be discussed but the problem is that the overwrought plot and all the self-referential posturing makes us struggle to genuinely care for anything we see. The horrific death of a main character is played like a cheap stage gag, there are wholly unnecessary plot twists and a romance between Bobby Strong, the junior toilet custodian who leads the revolt, and Hope Cladwell, the sweet-natured daughter of the UGC chairman, proceeds at such breakneck speed that one barely has time to breathe.

Indeed, I wonder if Urinetown makes quite as much of a splash as it did nearly twenty years ago when it took the New York Fringe Festival by storm and went on to sweep the awards circuit. Since then, we've seen musicals like Avenue Q and The Book of Mormon take on themes such as racism and religion with much more finesse. What we have here simply pales in comparison: a hopelessly predictable romance, jaunty but unmemorable songs and caricatured characters.


Pang treats the farcical plot as licence to stretch everything to the level of pantomime. Things move at a slick pace but there are exaggerated double takes when new characters or plot points are introduced and the whole affair smacks of a holiday sketch starring a group of ragamuffins. One may argue that the irreverence only underscores the satire but it's done in such a puerile way that one loses any emotional connection to the story itself. PANGDEMONIUM has carved out a niche in staging robust, hard-hitting musicals over the years like Spring Awakening, Next to Normal and Fun Home so this giggle-a-minute romp forms a bizarre contrast to its usual offerings.

The cast, though, proves to be Urinetown's saving grace. Pang has assembled a juggernaut of a team that boasts a wonderful mix of old collaborators and new faces. It's a delight watching veteran performers like Jo Tan and Sean Ghazi alongside comparative newcomers such as Kimberly Chan and Joash Tang. Even in small roles, there are good turns by the likes of Andrew Marko as a jocular policeman, Erwin Shah Ismail as an effete assistant and Edward Choy as a slimy politician.

Mina Ellen Kaye and Benjamin Chow, both of whom have distinguished themselves in previous musicals, strike a fine note as the romantic leads. Kaye dazzles with her soaring vocals in numbers like "Follow Your Heart" and "I See a River", reminding us of her show-stopping performance in The Rise and Fall of Little Voice while Chow, arguably one of the most promising actors of his generation, is especially memorable in the frenetic, technically demanding number "Run, Freedom, Run".

Urinetown is one heck of an entertaining musical that bears more than a passing resemblance to our murky world of surveillance and strife. I'm not convinced that it's gotten its tone quite right but I'll grant you this: when you finally get home, you will feel oddly satisfied to pee.