Guards at the Taj


First there’s its scale – with its magnificent marble dome, soaring pillars and lush surrounding gardens. Then, the perfect symmetry; it can literally be folded in half both forwards and backwards. Finally, the purity of that incandescent white marble. Commissioned by Mughal Emperor Shah Jahan as a mausoleum for his beloved wife Mumtaz Mahal who died in childbirth, the Taj Mahal is truly a sight to behold.

On the eve of the Taj’s final unveiling before the public in 1648, childhood friends and Mughal Imperial Guards Babur and Humayun stand watch at its door. As first light approaches, they resist the urge to steal a glance at the building that has taken twenty thousand men some sixteen years to build. The men are then ordered to commit a terrible act, one which will change their lives forever. 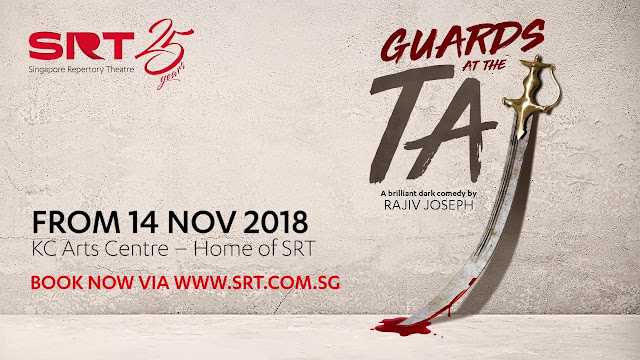 Rajiv Joseph’s blistering two-hander takes its inspiration from myths behind the construction of this magnificent monument and makes probing questions about friendship, duty and power. Is it possible for a symbol of extreme beauty to breed extreme violence? Does anyone have the right to circumscribe the creation of beauty itself? This Singaporean premiere of the award-winning play, presented by the Singapore Repertory Theatre and directed by acclaimed Malaysian theatre maker Jo Kukathas, conjures up the darkly humorous world of Joseph’s creation with style and sensitivity.

Although we never actually see Emperor Shah Jahan, his spectre hangs heavily over us. We learn how he spared absolutely no expense in procuring the finest materials from around the world to construct the building (pietra dura from Greece, marble from China, jasper from Uzbekistan), the unquestioning obedience of his subjects and the iron will of his decrees. To speak against the Emperor is an unquestionable act; there are three separate levels of sedition, with punishments ranging from torture to death. Blasphemy, however, only results in three days in prison. One is reminded of modern day dictators and despots who bend people to their will.

Like his earlier plays Gruesome Playground Injuries (presented by Pangdemonium in 2014) and Bengal Tiger in the Baghdad Zoo (presented by The Stage Club in 2015), Joseph wields the language of comedy as a weapon, giving us a chilling story about the human condition buffeted by bursts of bitter laughter. His dialogue is lived-in, casual and occasionally sparkles with poetic brilliance, eschewing accents or a more formal register. It brings this 17th century courtly tale right to the modern day, giving it a startling immediacy.

Kukathas shows a keen sensitivity to the text, allowing the comedy to come alive through a mix of physical, almost vaudevillian gags while never robbing the play of its deeper emotional truth. She coaxes fantastic performances from the two actors. Jay Saighal excels as the wide-eyed, fidgety Babur who preoccupies himself with dreaming up inventions like a flying palanquin and imagining life as a guard in the imperial harem only to be later pricked by his conscience when he finds himself saddled with a gruesome task. He forms a good counterpoint to Ghafir Akbar’s more grounded, pragmatic Humayun, who masterfully portrays the anguish of a man whose moral fibre is tested to its limits in the name of duty and emerges a mere ghost of his former self.

The actors excel not just in rapid-fire banter but also in simply letting the gravity of certain scenes wash over the audience. In one of the play’s most tender moments, Humayun washes dirt and grime off a distraught Babur and the two men just sit there, holding each other, trying to reconcile themselves with the dire situation they are in.

Even at ninety minutes without an intermission, there is some drag. Most of the dramatic situation is laid out in the first half of the play and the penultimate scene where one of the characters has to make an unthinkable decision. In between, the rampant philosophising, laboured scene transitions and a somewhat superfluous closing sequence slow down the narrative arc.

One also feels that the play could have unpacked a whole lot more on the topic to make it even more relevant for the times. References to migrant labour and of monuments being used as a bid to show sheer human might could have been used to make a point about modern immigration policies or the vanity of architectural pursuits where the mantra is always “bigger, bolder, taller”.


The production’s staging echoes the beauty and bloodshed in the text. Lighting designer Petrina Dawn Tan conjures up the changing colours of the sky with skilful fades, culminating in a stunning reveal as the men see the Taj Mahal for the first time, sinking to their knees in sheer awe. Multimedia projection by Brian Gothong Tan is used to great effect, evoking the grandeur of the surroundings through a succession of Mughal motifs and a thrilling aerial montage of the building itself.

Taj is a stylish, searing production that stares beauty straight in the eye and explores the human cost behind a monument of staggering majesty. It leaves one feeling emotionally drained but comforted by the knowledge that beauty is sometimes found in the simplest of things: the twinkle of stars in the vast night sky or a flock of colourful birds streaking through the jungle – cherished memories that sustain one long after the moment has passed.