The Curious Incident of the Dog in the Night-Time


More than five years after taking the National Theatre by storm, Simon Stephens' award-winning adaptation of Mark Haddon's novel has lost none of its ability to enchant. Marianne Elliot's production, jointly presented by the Singapore Repertory Theatre and the Esplanade as part of an Asia-Pacific tour, is truly terrific theatre: a simple, affecting story brought to life through stunning stagecraft. 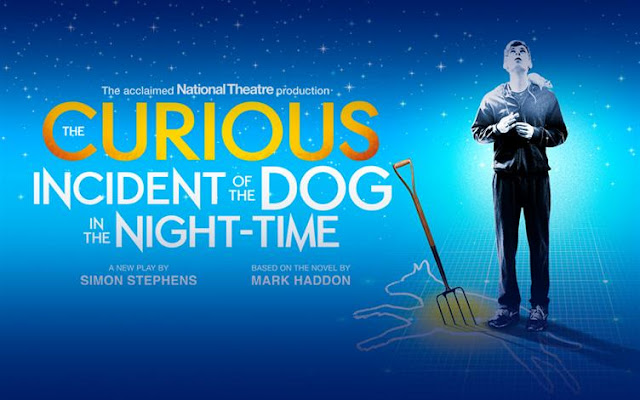 Christopher Boone (Sam Newton) is a fifteen-year-old boy in living in Swindon, England with his father. He has a highly intelligent and logical mind, is able to spout prime numbers in succession and is determined to score an A* in the maths A level. However, Christopher deals with some behavioural problems: he cannot bear being touched, gets frightened by crowds and unfamiliar spaces and hates it when people do not say what they mean. When Christopher discovers his neighbour's dog Wellington dead with a garden fork sticking out of it in the middle of the night, he embarks on a quest to discover the killer, only to go on the adventure of a lifetime.

Haddon's novel, and indeed Stephens' play, make no attempt to explain Christopher's condition. A lot of the symptoms he exhibits are indeed consonant with Asperger's Syndrome but the point is not to shoehorn or sentimentalise the character; Christopher remains an utterly unique individual with his own quirks. And to give us the chance to experience this very uniqueness, we are hauled straight into his incredible mind as he seeks to make sense of the world.

Elliot and her creative team conjure up a superlative theatrical experience. Bunny Christie's cube-like set which resembles graph paper is a nod to Christopher's affinity to mathematics and forms a canvas for all manner of brilliant projections by video designer Finn Ross. As Christopher scribbles on the floor with a piece of chalk, his writing snakes across the walls. His thoughts materialise themselves in words, symbols and drawings that race across the set. Paule Constable's lighting has the stage awash in a series of mesmerising colours.


These production elements come together with breathtaking effect. A standout sequence involves Christopher making a trip to the train station. For a boy who has never ventured beyond his street, this is nothing short of an ordeal and we get a sense of his disorientation from the discordant sounds and lights, passengers twisting into his path and trains rattling through the tunnel like feral beasts. It's a reminder of how everyday experiences can prove utterly bewildering for someone like Christopher.

The set is a treasure trove of hidden delights and part of the thrill of this production is just waiting to be surprised. A birthday present for Christopher is revealed to be a Golden Retriever puppy, earning yelps of joy from the audience. The sight of an illuminated toy train chugging through houses and trees to the bright lights of London is nothing short of magical; there's no better way to signal Christopher's bold decision to run away from home and track down his mother in the bustling capital.

All this makes for slick, satisfying theatre. Yet, Elliot is alive to the very human story lying at the heart of the play and keeps us emotionally invested till the very end. We see the very real struggles of parents dealing with a child whose symptoms both frighten and frustrate them, driving them to violence or despair. This is a play about a broken family and the lavish design does not detract from many tender moments which tug at the heartstrings.

Newton anchors the show in a electrifying performance that makes it virtually impossible to take one's eyes off him. He potters around with alarming energy as he seeks to process the clues around him, systematically trying to figure out who is responsible of the death of Wellington. Julie Hale as narrator Siobhan, the schoolteacher who encourages him to write a book based on his experiences, provides a solid emotional anchor. There is equally strong work by Emma Beattie as Christopher's estranged mother who feels torn between her new life and her obligations towards her son and David Michaels as his caring but defeated father.

Elliot keeps the action flowing seamlessly and paces the production incredibly well. Scenes are shot through with oddball moments of hilarity to leaven the emotional weight. A sequence where Christopher rifles through his father's room, uncovering a bizarre assortment of objects, is chock-full of delicious visual gags. The ensemble cast do a great job in inhabiting a wide range of characters such as a chatty old neighbour, clueless information desk attendant and various passengers on a train.

Curious Incident is ultimately a story less about disability than bravery, family and the desire to achieve something in the world - even if that just means doing well in mathematics. One leaves with the sense that boys like Christopher are every bit as special as anyone else. All they need is a little love and encouragement to fulfil their dreams.