by Robert Icke and Duncan McMillan
based on the novel by George Orwell
Singapore International Festival of Arts 2018
Esplanade Theatre, Singapore


The Singapore International Festival of Arts 2018, under the baton of new festival director Gaurav Kripalani, opens with a bang with this electrifying stage adaptation of George Orwell's 1984. Robert Icke and Duncan McMillan's  production, which took the UK by storm and swept the Olivier Awards, certainly lives up to the hype.

Icke and McMillan have crafted a version of the classic novel which teeters between the 1984 of Winston Smith, lowly employee in the Ministry of Truth, and an unnamed future period where the events of the novel are being debated at a book club. The frightening thing is that we never quite know which world we are in. Characters from the book club intrude Winston's world and, in a sudden flash of light, disappear. 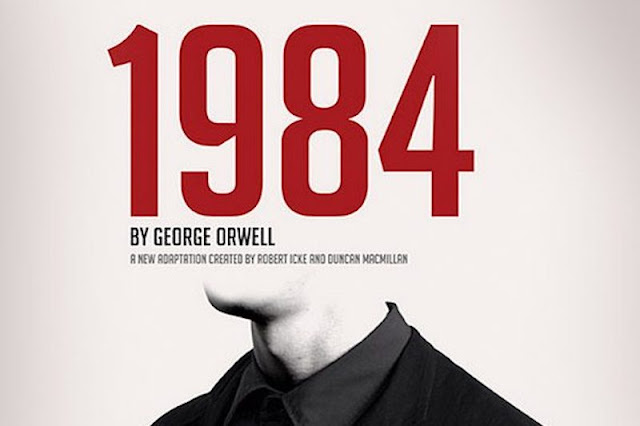 The appendix of Orwells' novel is rarely referenced in adaptations of the book and what we have here is a version where the world of Big Brother is apparently over and looked upon as if it were a curious relic of the past. Newspeak never really did become the lingua franca. But is all really well in this apparent normal future?

There are moments which are simply magnetic on stage. The Two Minutes Hate where party members gather in a room to denounce 'thought criminals' is performed with gratuitous gusto. There is also a sense of unease which lingers with the audience throughout. Lights snap on and off, characters mysteriously disappear and everything seems just slightly out of sync. we are put, quite literally, in the shoes of Winston as he sees his world spin out of control.

Much of the success of this production goes to the talented ensemble cast who fully commit to their assortment of roles. Tom Conroy shines as an emotionally overwrought Winston, the diffident rebel immured in a world of mindless conformity. Rose Riley lends sultry charm to fellow Ministry employee Julia. Although their relationship and affair progress far more quickly than in the book, they share a strong chemistry, buoyed by a mutual contempt of the system they are part of.

The action plays out in Chloe Lamford's library-like set which is accentuated by powerful lighting and sound effects. These do not always hit the mark; one finds the incessant strobe lighting a touch overdone. A particular innovation is the video design by Tim Reid. A large screen spans the entire length of the stage, allowing us to see close-ups of  offstage characters and drives home the theme of constant surveillance in this world. We see Winston and Julia spending moments of precious solitude in a secluded room, the illicit words he scribbles in his diary and are made to feel as if we are implicit in the action, an extension of the omniscient Big Brother himself.

Icke and Macmillan manage the stage action well and the scenes move briskly, keeping us thoroughly drawn into the story. This is a thrilling, urgent adaptation that only demonstrates the novel's continued relevance in a world dominated by surveillance, censorship and despotic leaders. A cracking start to the festival.