The W!LD RICE end-of-year pantomime is an institution. Over the past decade and a half, we've seen some of the most famous tales from the Western canon being given a fresh local spin for audiences of all ages - think Cinderel-LAH!, Jack & the Bean-Sprout or Hansel and Gretel. The company even made a foray into the realm of Asian stories with the critically acclaimed Monkey Goes West in 2014, a play that was crowned Production of the Year at the Life! Theatre Awards. This year sees another iconic Chinese tale get its own unique rendition.


This breezy version of the famous legend focuses on the story of Madam White (Glen Goei) and her sister Auntie Green (Ivan Heng), two snake spirits taking the guise of women. The sisters run a medical store in the mountains, dishing out remedies to villagers far and wide. Madam White's human son Meng (Andrew Marko) grows restless of his sequestered life and decides to run away. Along the way, he meets a new friend Mimi (Cheryl Tan) who brings him to a martial arts school run by her father Fahai (Siti Khalijah Zainal), a crusty old monk who has an axe to grind against the sisters. 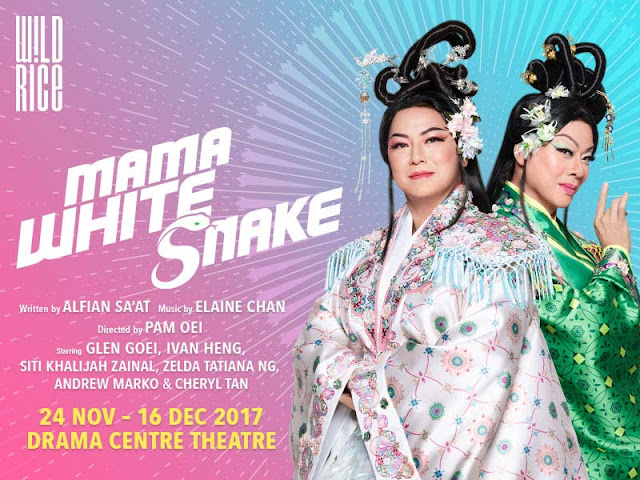 Mama White Snake brings together company founder and veteran performer Heng and long-time collaborator Goei on stage for the first time. The pair, who have known each other for four decades, milk their scenes to giddy heights, each gesture being accompanied with operatic flicks of the sleeves and the clash of cymbals. Goei's fussy, maternal ministrations are a nice counterpoint to Heng's flightier performance that recalls the latter's turn as Albin in La Cage Aux Folles. The duo are consummate entertainers who enthrall us not only with their sizzling chemistry but an array of impressive physical skills drawn from Chinese opera and wushu that could only have been honed from long practice.

Playwright Alfian Sa'at keeps the tone light for the most part and peppers the plot with laughs aplenty, throwing in adventure and a hint of romance into the mix. He has the audience eating out of his hands from the outset as the two sisters, resplendent in shimmering dresses, trade hyperbolic compliments about each other's beauty to the consternation of Meng.

Yet, what one finds lacking in this latest musical confection is an element of biting satire and social commentary. W!LD RICE has always managed to target its pantomimes at adults and children alike, making veiled references to politics, culture and society that keeps the atmosphere deliciously relevant. What we have, however, feels rather toothless - a reference to tiger mums here, a jibe at transport apps there. Surely some of the staggering news events of the year could have found their way into the script?


Apart from the magnificent Heng and Goei, the other members of the main cast are simply competent rather than truly spectacular. Tan bumbles about like a Disney princess, pondering the concept of yuan fen or fated relationships and trying not to get sucked into her parents' revenge plot. It's a far cry from her nuanced performance as the young Empress Cixi in Forbidden City: Portrait of an Empress earlier this year. Likewise, Marko is pleasant but rather forgettable as the naïve Meng, a role that seems wasted on a fine actor who dazzled crowds with his breakout turn as an autistic boy in the critically-acclaimed drama Falling. Theatrical tour de force Siti tries her hardest to animate Fahai but one longs for some of her natural spunkiness to break through the bald, bearded façade.

The score by Elaine Chan is generally pleasant with Chinese musical instruments like the flute and erhu being integrated into the music for a delightful aural fusion of the East and West. However, apart from one or two songs like romantic ballad Wrong and Right, one would struggle to describe the score as being particularly memorable. Numbers like People Are Dangerous amount to little more than filler pieces to showcase slick dance routines. There are also no standout singers in the cast to grab our attention.

At the end of the day, the evening is buoyed by the effervescent performance by the F!RST STAGE and Martial House kids who spice up every scene they are in, from martial artists brandishing their fists to gambolling pandas and adorable sea creatures. Some of the older children even get fantastic little acting moments, portraying the sisters in a flashback or an array of other vivacious characters.


Like in previous years, the various production elements come together in a delightful symphony. Tube Gallery has the audience cooing in every scene with their exquisite, colourful costumes. Wong Chee Wai's sets offer visual pizzazz and incorporate beautiful Chinese motifs. There is also brilliant work on the dance, fight and Chinese opera choreography by Andy Benjamin Cai, Gordon Choy and Choy Yien Chow which keeps the action riveting. My one quibble would be Brian Gothong Tan's digital backdrops which seem a needlessly modern flourish and prove, at times, to be fairly distracting. Pam Oei, directing her third W!LD RICE pantomime, manages the traffic onstage with aplomb, keeping things brisk and bustling till the end.

On the whole, Mama White Snake is a buoyant and uplifting show to ring in the festive season with a core message of accepting alternative families and treating everyone with kindness and respect. Even if it lacks a sharper, satirical bite, this is one tale that slithers its way into your heart.