There’s no denying the impact of Michael Chiang’s Army Daze, which brought the world of national service (NS) to the Singapore stage for the first time in 1987. This light-hearted tale of the misadventures of five recruits as they bungled through Basic Military Training captured the Singapore zeitgeist in a way that transcended race, class and language and went on to become one of local theatre’s biggest hits, spawning multiple revivals, a box-office smashing film and a star-studded 25th anniversary musical version.

Now, in conjunction with the golden jubilee of NS and the play’s 30th anniversary, Chiang has written that much anticipated sequel, set thirty years later. 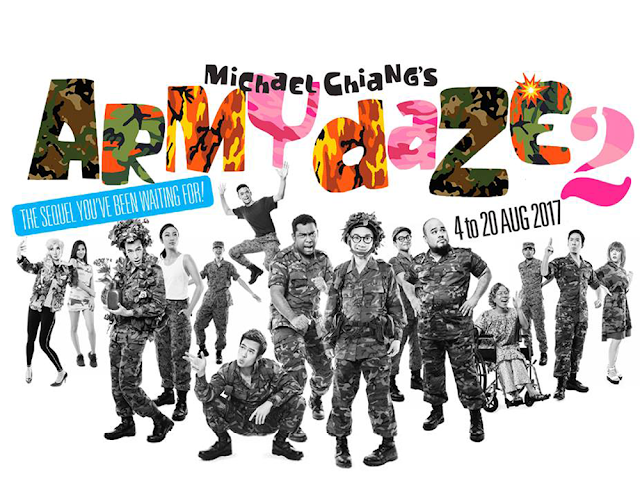 But should he have bothered? As much as we love clueless mummy’s boy Malcolm Png (Hossan Leong) and his crew of colourful misfits – earthy Ah Beng (Joshua Lim), equable Krishna (Ebi Shankara), easy-going Johari (Saiful Amri) and effervescent Kenny (Shane Mardjuki) – do we care what happens to them three decades on? Are we not content to remember them for the quirky, utterly Singaporean characters that they once were?

Therein lies the rub. This glossy, paper-thin production helmed by Beatrice Chia-Richmond trades so heavily on the brand of the original that the actual plot of this follow-up becomes window-dressing. From the outset, Chiang sets up a mood of grand nostalgia. A lengthy prologue sweeps us through the best hits of the original Army Daze, introducing each of the five men, in turn, to catcalls and applause. Lest we forget inimitable drill instructor Corporal Ong (Chua Enlai) and his dubious words of wisdom, he keeps popping up like a Hokkien jack-in-the box.

Then, we are catapulted into the year 2017. The NS buddies have drifted apart and now lead separate lives. Malcolm, who signed on with the army, is a colonel and director of public affairs at the Ministry of Defence. Elsewhere, Johari serves the best ayam penyet in town, Ah Beng helms a major e-commerce platform, Krishna’s an architect and Kenny’s a successful interior decorator. In a perfunctory sequence, we see that each of these men is saddled with some variety of personal or professional problems. Yet when they reunite by chance at a mutual acquaintance’s funeral, it’s as if no time has passed and there are high-fives and hugs all round. Through all this, we find ourselves remembering the men for the colourful characters they used to be. Their middle-aged personas somehow lack that unbridled individuality, zaniness and spunk that had so endeared them to our hearts.

Joining them are a slew of fresh faces. The army welcomes its first ever female chief of staff (Oon Shu Ann) amidst a media frenzy. Meanwhile, four young men get ready to embark on their own BMT experience – Malcolm’s son, Justin (a suitably strait-laced Andre Chong) and his friends Donovan (Tahir Ansari), Zai (Irsyad Dawood) and Kuan Yew (Tay Hwan Haw). As the guys compete for the attentions of girl-next-door Renee (Natalie Ong) and go through routines such as shaving their heads and learning the art of camouflage, it’s hard not to be reminded how such scenes were dealt with so much better in the original play. This new generation seems to be just a weak facsimile of the old.

Chiang, to his credit, is a writer who’s always had a pulse on what’s current. His last play, High Class, took on reality television shows with a delicious local twist. Here, he mercilessly riffs on the world of social media through the character of Ariston (Jo Tan) a linguistically-challenged vlogger who has started a smear campaign against the army and is out to spread the most sensational news she can find to bolster her online popularity.

Fans of Chiang’s plays will also get punchlines and puns to their heart’s content. When teased about his initials and asked whether his English name happens to be Harry, a poker-faced Lai Kuan Yew remarks, “No…it’s Oxley.” There’s an entire song called ‘Look See Believe’ devoted to the infamous CB leaf featured prominently in the original play (try saying it aloud). Indeed, judging from the raucous response on the gala night performance, the audience was simply lapping up the cheeky pop culture references. There are also enough plot twists in store to rival a Korean soap opera.

I was considerably less enamoured of the script’s tendency to elevate things to the level of pantomime. When one of the recruits mentions his penchant for dance, a Swan Lake sequence with male ballerinas erupts in the army bunks. As Krishna reminisces over ex-girlfriend Lathi, we get a full-blown Bollywood number complete with shimmering saris. Surely we’ve moved past this level of cheap caricature?

Chia-Richmond brings together this many-headed beast into a slick production that clips along smoothly and never outstays its welcome. While the short, frothy scenes make it hard to genuinely connect with any of the characters, the cast pull out all the stops and certainly deliver the goods. There are standout performances by Chua Enlai in a triple role as a gormless defence minister, whimsical army man and the latter’s provincial grandmother and Jo Tan shines as the social media superstar who perpetually name-drops her sponsored brands. Perhaps apt for a production that is ultimately a glorious celebration of NS life, Wong Chee Wai’s set resembles an army-themed Hallmark card, with a sliding panel on the floor for actors and props to be swiftly carted around.

There will no doubt be scores of people who will enjoy this sequel every bit as much as the original play. Yet, having only recently caught Checkpoint Theatre’s Frago, a tender and nuanced take on reservist life, sitting through this candy-coloured confection feels a bit like switching from fine dining to fast food. Yes, it hits the spot. But is it really good for you?