Smack in the middle of a busy 30th anniversary season which has seen three main stage productions, The Necessary Stage debuts an exploratory platform called The Orange Production where the company collaborates with new artists on compact works of theatre. This inaugural edition features a double-bill of plays: Drip by arts journalist, poet and playwright Nabilah Said, directed by Haresh Sharma, and Whale Fall by playwright and theatre educator Faith Ng, directed by Alvin Tan. 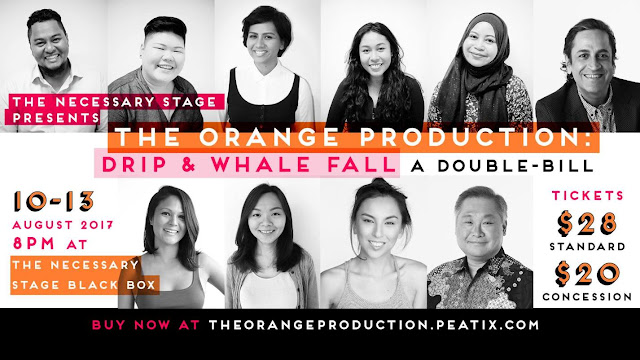 The evening kicks off with family comedy Drip. Azam (Faizal Abdullah) and his wife Xiaoyan (Deonn Yang), a Chinese convert to Islam, are having a trying day. He's nursing a terrible hangover after a house party while she battles pregnancy cravings for all manner of taboo pork dishes. The couple's lives are thrown into further disarray when Azam's estranged sister Ana (Shafiqhah Efandi) turns up unannounced and his staunchly religious mother (a scene-stealing Nurijah Sahat) decides to check up on him.

Much of the tension centres around the couple and Ana trying to hide bottles of liquor littered around the house before the mother arrives. Yet the truth is eventually discovered when she spots an offending drop of alcohol on the rug. Over the course of an afternoon, secrets spill out, exposing a string of everyday prejudices, compromises and religious hypocrisies.


Why is Azam able to drink like a fish while his wife, who grew up eating pork and is only nominally Muslim, forbidden from indulging in her porcine cravings? What makes one taboo worse than another? Why does Xiaoyan have to accept her name being changed to Sarah by her mother-in-law and try so hard to be a good Muslim when the latter makes no attempt to learn about her culture? And why does the mother reject Ana, who is cohabiting with her Indian boyfriend, while she lavishes attention on Azam who married someone from outside the faith? It is telling that when she discovers the alcohol, her first thought is that they must belong to Xiaoyan - the outsider - as she refuses to believe that her precious son could do any wrong.

Budding playwright Nabilah has a fantastic ear for dialogue (both Malay and English) and her characters jump off the page. The cast inhabit their roles with great gusto and keep us riveted in their stories. There is an especially commendable effort by Yang as the earnest convert who tries her best to speak a new language even though it inadvertently excludes her at times. Sharma navigates the dramatic tension well and allows the comedy to shine while not drowning out the darker themes simmering below the surface.


Nonetheless, I would have preferred a slightly lighter touch to the staging. Scenes which riff on Malay television dramas, complete with darkened lights and heightened music, seem unduly stagey. The script, which tends to peter out in the second half, could also have been edited slightly to give it greater dramatic thrust. Water is an important visual metaphor: the forbidden alcohol is neatly contrasted with the bottle of prayer water brought by the mother. Yet this perhaps goes too far. A final sequence involving plates spilling with water is a clunky allusion to the secrets that the couple have been trying to contain.

Secrets and water also feature in Whale Fall. This dreamy two-hander, featuring real life best friends Elizabeth Lazan and Jeane Reveendran, sees Ng depart from the lived-in realism of her earlier plays such as For Better or For Worse or Normal and take on something more abstract.

The action kicks off in a darkened room with one girl trying, unsuccessfully, to drag her friend out of bed so that the latter will not be late for work. It is then revealed that the pair have merely been rehearsing a scene from a play. The narrative meanders between the literal and figurative worlds as the pair confront differences, share anecdotes and re-create various scenarios, one of which involves them seeing a beached whale on the shore and spending time under the sea.


Alvin Tan coaxes fantastic performances from the two actors and there is some beautiful physical theatre work, accompanied by intoxicating sound design by Jing Ng, which captures this ethereal, undulating landscape perfectly. There's a lovely moment when the pair plunge into the sea, feeling the glorious release of weightlessness as they float around the stage. Dominating the action is a giant moon, which metaphorically pushes the characters together and pulls them apart as they navigate the contours of a well-worn friendship.

Much like Drip, Whale Fall succeeds in moving from lightness to darkness with ease. A character cracks at one point, saying that she is fed up of simply supporting her friend and not getting a chance to lead. At other moments, the characters sing along to a children's jingle with joyful abandon and chomp on sweets.

Neither play offers an easy resolution. The family in Drip get together for a meal of chicken char siew (nice touch), tensions momentarily restored, while the friends in Whale Fall trade places as one tucks the other tenderly into bed and extinguishes the lights. We are left with a sense of infinite possibilities and new beginnings. Who knows what the next day will bring?

*Do check out my reviews of the other productions in The Necessary Stage's impressive 30th anniversary season: Actor, Forty,  Those Who Can't, Teach, Being Haresh Sharma and Sanctuary.
Labels: comedy drama faith ng nabilah said play singaporean theatre the necessary stage the orange production