Riders Know When It's Going to Rain/ Hawa


This double bill, part of the opening weekend of the Singapore Theatre Festival organised by W!LD RICE, is a great showcase of new Singaporean Malay writing. The two plays are vastly different in theme and make for a long session when seen together but provide plenty of food for thought.

The evening kicks off with Riders Know When It's Going to Rain, which first appeared as a staged reading during overnight literary and performance arts showcase What I Love About You Is Your Attitude Problem as part of last year's Singapore Writers Festival. Nessa Anwar's debut play revolves around four friends and the one love of their lives: motorbike riding. Nessa is herself an avid rider and this infuses her writing with a fierce authenticity. Four motorbikes sit proudly onstage throughout the performance, giving us an immediate connection to this colourful world. 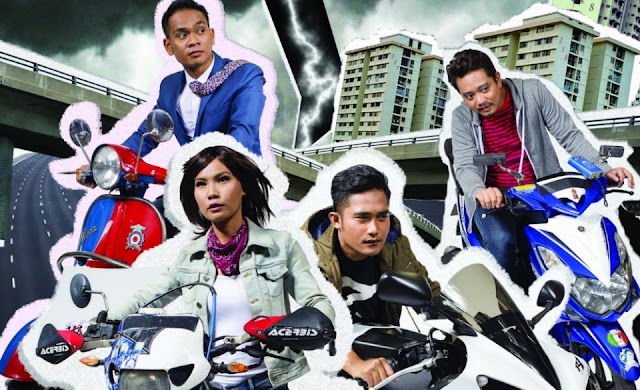 The play is comprised of short vignettes that move back and forth over a period of eight years. At the heart of the story is Risha (Nessa), a tough, spunky girl in this male-dominated world who has far more in common with her riding friends than her university schoolmates. These friends range from the wealthy but down-to-earth Remy (Raimi Safari), soulful, all round nice guy Nizam (Riduan Zalani) and swaggering Alep (Norisham Osman), a guy who lives to ride and pays scant regard to his personal safety.

Riders is a gripping portrait of individuals from this milieu - the tendency to define oneself by the machine one rides, the daily struggles and frustrations and above all, the infectious zest for life. Nessa is especially successful in capturing the earthy and earnest banter amongst friends. Scenes featuring the gang simply hanging out and teasing each other are lived-in and instantly believable.

However, the numerous scene transitions (which involve a hospital bed being wheeled on and off) prove clunky. The play is also weighed down by monologues which feel incongruous to the generally laid-back, naturalistic dialogue. Indeed, I was reminded of Nessa's own turn in multidisciplinary student production City Night Songs where her character (a likely precursor to Risha) breaks into a poetic speech about speeding bikers which feels rather artificial. For all fun and banter, I didn't really see what kept these four friends together.

Director Aidli 'Alin' Mosbit calibrates the emotions well and strikes a good balance between comedy and drama. While there is a sense of impending tragedy, this is never overplayed. On the technical side, James Lye conjures up evocative soundscapes to augment the action.

Ultimately, Riders is both chatty exposé and cautionary tale - an ode to the world of riding and a warning against the dangers of doing so recklessly. It may not always cruise along at a perfect speed but this is one road trip to remember. 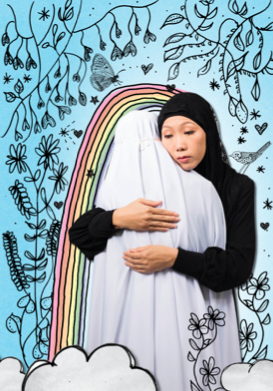 Where Riders can be seen as a celebration of life and its transient thrills, Hawa remains resolutely focused on the opposite. Johnny Jon Jon's play, which enjoyed a small but warmly received staging by Hatch Theatrics last year, explores the topic of Muslim burial, something rarely seen onstage, while also touching on religion and sexuality.

The play revolves around Siti (Koh Wan Ching), a recent Muslim convert who is trying to organise the final burial rites for her female friend who is later revealed to be her lover. She faces considerable difficulty trying to get through to Ahmad (Saiful Amri), the proprietor of the Muslim burial company whom she engages. Things take an interesting turn when they are joined by Zaki (Al-Matin Yatim), a young man who routinely attends the funerals of strangers.

There are many powerful questions that Jon Jon attempts to address including religious double standards, the clash between form and substance and the importance of love and acceptance. Hawa is striking in its portrayal of a fiercely independent Muslim woman, one who is unafraid to question her religious expectations and challenge the status quo.

Koh's Siti is an entrancing presence who demands answers from her faith. In one scene, she rips off her headscarf and throws it to the floor, decrying it as a piece of cloth that does not change who she is. Yet, the same religion which frowns upon her lesbian relationship is what she turns to for solace, reminding us of that human need to believe in something greater than oneself.

Indeed, none of these characters are perfect. Ahmad, for all his religious superiority, is revealed to be a mercenary character who has no qualms about hiring mourners for a fee and selling expensive funeral packages to make a quick buck. Zaki, despite reiterating his fardhu or religious obligation as a fellow mourner, has the disturbing habit of chatting up "veiled sisters" at funerals. Over and over, the play drives home the fact that outward displays of religion are no indicator of true morality.

Director Faizal Abdullah (who also has a cameo as the deceased's estranged father) keeps the action flowing smoothly and uses the space effectively with simple blocks as props and curtained partitions for flashbacks. However, the play is not without its flaws. The pace slows down considerably towards the end and the narrative can certainly be tightened. Scene transitions featuring female voiceovers which describe different qualities and those involving a young Ahmad visiting his mother's grave do not add much to the plot.

Hawa is at its most gripping when it gives us an insight into religious rituals that few may be privy to. The play's most arresting scene involves Ahmad giving Siti a long, detailed account of how to wash and prepare a Muslim body for burial, a task which can only be performed by a person of the same gender. Seeing this procedure re-enacted drives home the finality of death in a powerful way. As the characters stand to recite the final prayers for the deceased, one gets the sense that an equilibrium of some sort has finally been reached.

Riders and Hawa are important additions to the local theatrical canon, presenting alternative voices that one rarely gets a chance to engage with. These are flawed but deeply human characters whose stories deserve to be told.