Three Days in the Country

based on A Month in the Country by Ivan Turgenev
in a new version by Patrick Marber
National Theatre, London (Lyttleton)


Turgenev's comedy of manners, A Month in the Country, gets a fresh spin in this jaunty new adaptation written and directed by Patrick Marber. The action - as the title suggests - plays out over a much shorter timeframe than the original and is clothed in rich comedy. The end result is a play that proves endlessly entertaining but which perhaps elides some of the deeper tones one tends to find in Russian theatre. 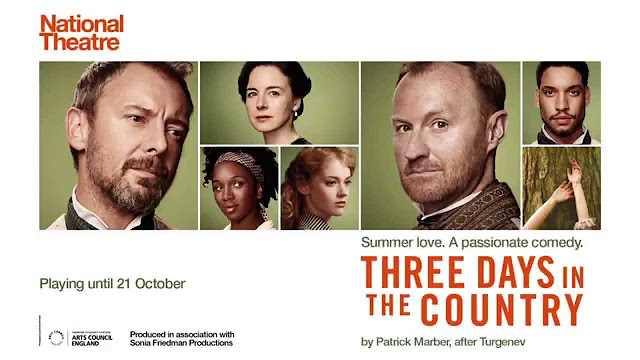 The plot remains largely the same. Natalya, the bored wife of an affluent landowner, finds her life thrown into disarray when she falls for her son's strapping new tutor, Belyaev. When she discovers that her teenage ward Vera is also smitten by the tutor, she concocts a plan to get her out of the way, setting the stage for a frenzy of emotions as the summer days unfold in the family's country estate.

Marber is probably best known for his searing 1990s plays about urban life such as Closer and Dealer's Choice which confronted themes like love, sex and betrayal while maintaining a strong comic stamp. He uses this gift for comedy to great effect here, bringing a delicious hilarity and heft to Turgenev's play. His production is also blessed with economy: the punchy, streamlined text and tight scenes keep audiences enthralled.

Amanda Drew brings a skittish sauciness to Natalya, who wilfully teases her admirers with coy words yet manages to convey a sense of domestic tragedy at being mired in a world she has no control over. Her emotional collapse at the end, following the departure of Belyaev, evokes a sense of pity in us for this young woman who had merely been looking for some colour in her life. There are commendable performances by Royce Pierreson as the rakishly political tutor, Cherrelle Skeete as a sprightly maid and Lily Sacofsky as the sweet but headstrong Vera.
﻿

The marquee names in this cast are Mark Gatiss and John Simm and they do indeed deliver. Gatiss's  turn as  ineffectual country doctor Shipgelsky - the self-declared "maestro of misdiagnosis" - is one of the highlights of this production. In a scene that has the audience weeping with laughter, he decides to propose to a prissy, middle-aged family acquaintance, throwing out his back in the process and moving on all fours like a crazed reptile. Simm's Ratikin, by contrast, channels suave sophistication. He catches beautifully the pain of a man whose attentions are casually ignored, turning him  bitter and cynical when he realizes that he will never hold a place in Natalya's heart.

Mark Thompson's set is a wash of bright colours that evokes a pastoral idyll and is nicely complemented by Neil Austin's lighting. One however feels that this abstract design sits uneasily with the otherwise faithful period setting and naturalistic treatment of the play; a bright red door hangs mysteriously in the air in the first half and actors who leave the action sit in a row of chairs upstage, watching the others.

Marber's production makes for a thoroughly enjoyable evening but ultimately emerges as little more than a breezy summer comedy. There is an attempt to inject pathos in its closing moments but on the whole, Marber's version of the play - one that is richly anticipatory of great works of Russian theatre by writers like Chekhov in the coming decades - does not quite plumb the depths of emotion one would expect. The quiet despair of domestic life and bitterness of the human condition fade away in favour of  sharp, punchy scenes that are guaranteed to delight. It may not take us very far but this is one sojourn in the country we are more than happy to join.