In a forgotten ward of a derelict psychiatric hospital in Budapest, a group of mental patients languishes, presided over by a self-medicating doctor and a sexually frustrated nurse. Against all odds, they have achieved a warped sense of equilibrium in this wasted space, using music to take their minds off the numbing pain. Their daily routine is disrupted by the arrival of a cavalier investor, Bartonek, who declares that he has just acquired the property and intends to evict the patients in a few days. This is the world of Dementia, a gritty microcosm of modern day Hungary with its alienating effects on society.

There's no easy way to sum up this maelstrom of a production by film auteur Kornél Mundruczó as part of this year's Singapore International Festival of Arts. It is as irreverently genre-bending as it is unforgettable: at once painful and poignant, flawed and funny. There are crucial themes about the importance of end-of-life medical care, mental health and social inequality in a capitalist society. Yet far from being hard-hitting and didactic, Dementia is a many-headed beast, gleefully taking comedy, tragedy, film and song in its stride. The very schizophrenia and arbitrariness of the narrative may prove frustrating but there is a method to the madness; one cannot think of a better way to capture the fractured state of mind of the mentally handicapped. 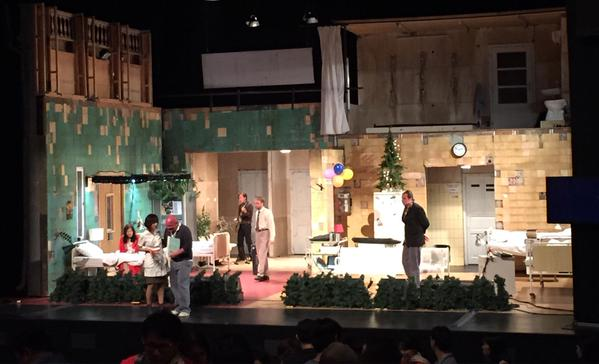 Much of Dementia's strength derives from its superb ensemble cast who invest their characters with both depth and dash. Roland Rába commands the stage from the very outset as the loquacious doctor who is gradually revealed to be almost as mentally unhinged as his patients. He makes a fantastic double act with János Szemenyei's Bartonek, the slimy, besuited opportunist who only cares about making a profit. There is also a stirring turn by Annamária Láng as the nurse whose only way of dealing with her loneliness is to fellate an unsuspecting man who encounters her in the shower. The actors playing the mental patients are revelations in their own right, hinting at tragic private lives and shattered dreams.

Mundruczó's dark sense of humour and penchant for casual violence pervades the production, which hurtles at us with an unflinching ferocity across nearly two hours. Our sheer horror at witnessing Bartonek's tongue getting snipped off by a manic patient dissolves into helpless laughter as the doctor and nurse scramble to sew it back on, accompanied by a bawdy song and dance sequence. Mundruczó's film background underscores the production and conjures up a Big Brother-like state of constant surveillance that the patients are subject to. A heartbreaking scene where each of the patients is, in turn, forced by Bartonek and the doctor to sign a declaration that they ready to be discharged is filmed on a hand-held camera and displayed on a screen, in unforgiving close-up. Suddenly, the curtains are pulled back to reveal the events unfolding before us in real time.


Credit must go to Márton Ágh's gorgeously realized set, complete with beds, medical equipment, a second-floor shower room and dilapidated walls and fixtures. The two ends of the set even impressively fold inwards towards the end, revealing the wintry façade of the hospital. The grim realism of the set, a stark reminder of the conditions facing mental patients at the fringes of society, is nicely contrasted with the many absurd, larger-than-life sequences. The music by Szemenyei also proves a highlight of the production and adds a jagged, jaunty flavour to the action. Indeed, it is a testament to  Mundruczó's direction that despite all the emotional ups and downs, our attention in this demented party never wavers.

One will not fail to be moved by the bitter yet beautiful dénouement, where the denizens of the hospital are driven to the only logical way of dealing with their predicament: the quiet embrace of suicide. It reminds us of the despair of those who exist of the edges of our consciousness, the voices of those individuals who get drowned out in the march of modernity. If we as a society allow that flame to die out, it is us who will ultimately be engulfed in a crippling darkness. And for reminding us of that, we have Mundruczó and his team at Proton Theatre to thank.