We've had a slew of glitzy, grandiose productions this year that have jumped on the SG50 bandwagon, championing their version of the national narrative. This special commission as part of the Esplanade's annual Pesta Raya (Malay Festival of the Arts), written and directed by Zizi Azah, manages to inject a much-needed breath of fresh air amidst all the sound and fury.

Here is a fresh take on the Singapore Story, one which doesn't feature the same cast of characters and hackneyed tropes from our social studies textbooks. We delve into the life of Yusof Ishak, the country's first President, moving back and forth across more than thirty years to gain a closer and more nuanced look at the man whose portrait graces our banknotes. 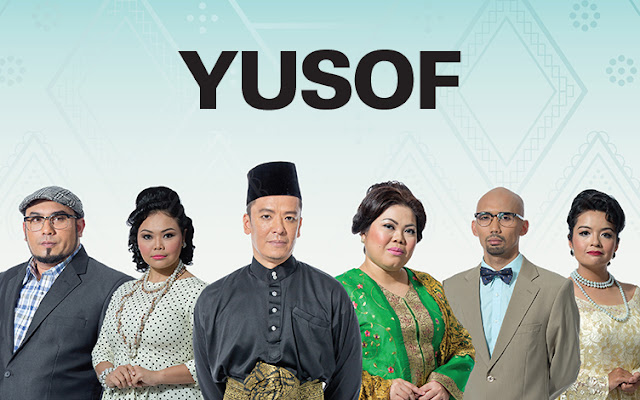 Yusof begins with a colourful Hari Raya party thrown by President Yusof Ishak (Sani Hussin) and his wife Puan Noor Aishah (Wan) (Siti Khalijah) for his siblings and ends with a wistful monologue delivered by Wan shortly after her husband's demise in 1970. In between, we trace the journey of Yusof as a bright young man in Perak with fiery ideals, his time running the Utusan Melayu - Singapore's first Malay newspaper, the rise of nationalism and his eventual appointment as Singapore's Yang di-Pertuan Negara (Head of State). The historical context sets the scene but it is ultimately the story of Yusof as a family man that lies at the play's heart.

Sani and Siti make a solid pairing and carry their scenes with a mix of both vigour and empathy. While Sani tends to be a little too aggressive at times, he conveys the steadfast ideals of Yusof with conviction and is especially arresting in his confrontation with Tunku Abdul Rahman, the Prime Minister of Malaya, who orders him to use the Utusan Melayu as tool to further the ends of Malaysian  political party, UMNO. Sani also excels in moments of quiet introspection, a side he displayed to great success when he performed Irfan Kasban's monologue 94:05. Siti, ever the versatile actress, is luminous as the young wife who stands by Yusof's side and her mastery of the Penang accent and more formal linguistic style of the time is commendable.


Indeed, it's difficult not to draw a comparison between this charming husband-and-wife pair and that of Mr Lee Kuan Yew and Mrs Kwa Geok Choo in the much-vaunted The LKY Musical which recently ended its run. While the relationship there had felt weak and poorly delineated, Zizi injects both humour and pathos into her characterisation and reminds us that Wan is no mere character standing in the shadows but a robust woman with a quiet, unassuming power of her own.


The supporting cast juggle a variety of roles, with notable work by Erwin Shah Ismail (in his first Malay theatre role) as the pragmatic editor of the Utusan Melayu, and Farah Ong as a feisty young journalist who provides a delicious dose of comedy. Najib Soiman and Erwin also shine as Yusof's two younger siblings, the gregarious Ramley and more reserved Aziz.

Zizi handles the fact-heavy material well and the non-linear structure of the play - an approach last seen in her intriguing adaptation of Claire Tham's The Gunpowder Trail - keeps things fresh. One wishes that the play had probed a little deeper into the life of Yusof as the Head of State; the bulk of the plot rightly focuses on his work at the Utusan Melayu but it would also have been meaningful to see him as a leader of the nation when he finally reaches the zenith of his political journey.


Izmir Ickbal's set is simple yet striking, comprising of a series of arched entrances and a second storey landing. It's a pity that this upper level is not utilised more. There is a nice scene of the Utusan Melayu staff gathering on the roof and watching the arrival of the Japanese soldiers in Singapore during the Second World War and I would have liked to see this vantage point being used more creatively elsewhere. Kudos also to the charming musical backdrop by Alhafiz Jamat that conjures up the sounds of yesteryear with its emphasis on traditional Malay music. Zizi's direction is generally good though the scene transitions could be made quicker and tighter - these tend to slow down the pace.

All in all, Yusof is a compelling and elegant historical drama and a makes a wonderful addition to the Singaporean Malay theatre canon. It's refreshing to examine our nation's journey from a different angle and this vivid glimpse into the life of a statesman whom many may not know all that much about is certainly appreciated.