Over the years, we've come to expect solid, thoughtful productions of world classics from Nine Years Theatre. Its latest project is an adaptation of Russian playwright Maxim Gorky's The Lower Depths - a bleak, bitter tale about a group of people living in a homeless shelter in an unnamed Russian city. This is no frothy crowd pleaser and I'm really glad to see a play of this nature staged in Singapore (and by a Mandarin theatre company, no less) even if the overall effect proves a little less than inspiring. 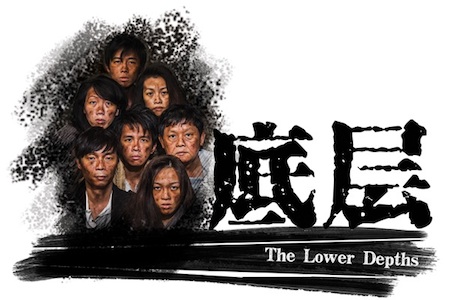 Director and translator Nelson Chia has pared down Gorky's play by condensing both the text and the wide cast of characters. Each of the seven actors plays more than one character. Other more obvious Brechtian flourishes that have featured in the company's previous productions (actors getting dressed at the side of the stage or introducing their characters to the audience) have been omitted this time round, making for a cleaner and less laboured feel. Chia is alive to that particular trait of Russian theatre where comedy weaves its way into the grimmest of situations and the production is buoyed by several instances of black humour. His direction is generally smooth though the scene transitions could have been made far more crisp; the play tends to lose some momentum as it goes on.

The fundamental theme that emerges is the despair of the dispossessed. These are individuals who exist at the very fringes of society and live, precariously, from one day to the next. To distract themselves from the bleakness of their predicament, they tell stories, pursue fantasies and embrace the heady comforts of alcohol. They strive for a richer, better life though it is clear that this will always elude them. Chia's version of the text unfolds in simple, sparse language and the characters are merely identified by their professions such as a pot-builder, musician  or thief.


Most of the cast are members of the Nine Years Theatre Ensemble Project who have been working and creating theatre together over a sustained period. The ensemble display good energy and an earnestness in embracing the material but, unfortunately, this is one of those plays which is difficult for a company of mostly young urban actors to connect with. There is a melancholy and emptiness that claws through the text which cannot simply be conveyed by donning shabby clothes and looking stricken. It's because of this that the production ultimately fails to move; one appreciates the dark, weighty themes simmering below the surface but is unable to truly empathise with any of these characters as an authentic individual.

Tay Kong Hui stands out for his portrayal of the Old Man, an amiable new arrival to the shelter who breathes life into the denizens' depressing routine and offers them a glimmer of hope. There is also an engaging turn by Johnny Ng as a bumbling, retired actor who keeps breaking out into snatches of Shakespeare. While there is a genuine attempt by the cast to distinguish the characters they are playing by using accessories like beards and wigs, this does not always work: one cannot shake off the sense of watching a group of youngsters playing dress-up.

In a country like Singapore with an ever-widening economic gap, The Lower Depths is a sobering reminder of the quiet, downtrodden people who share the same space as more privileged members of society. Though the manner of its execution could have done with some refining, this is an important and moving play that will continue to provoke debate.