Hot off the heels of its high-octane production Public Enemy in April, W!LD RICE explores the tenet of peace by examining Singapore's relationship with her closest neighbour, Malaysia. Another Country is a new and rebooted version of W!LD RICE's hit production ten years ago called Second Link: The Singapore-Malaysia Text Exchange. The concept is simple but engaging: five Malaysian actors perform a selection of Singaporean texts followed by five Singaporean actors who take on a variety of Malaysian texts.

Another Country is an enticing mix of old and new. Apart from Lim Yu-Beng and Gani Abdul Karim who were part of the original Second Link cast, the production features a new mix of faces from both sides of the Causeway. Alfian Sa'at steps in to curate the selection of Singaporean extracts (this was previously done by Eleanor Wong and Alvin Pang) while Leow Puay Tin continues in her role as Malaysian curator. Ivan Heng, who had originally directed Second Link, here directs the Singaporean performers while acclaimed Malaysian performer Jo Kukathas helms the Malaysian contingent. Another fun fact: the Malaysians wear black outfits and the Singaporeans wear white, reversing the colour scheme used in Second Link. 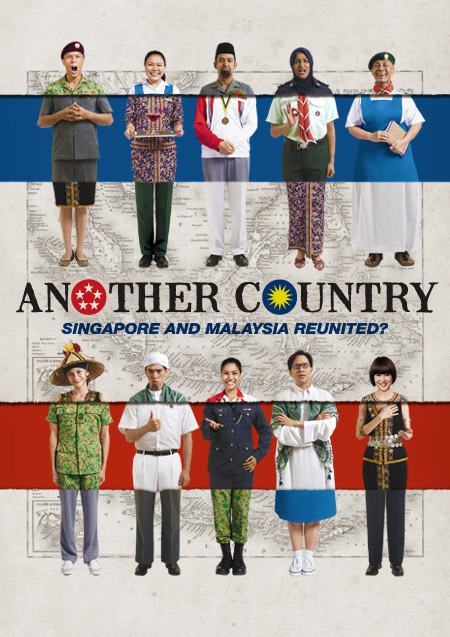 The first half of the production (titled Sayang Singapura) stands out due to the rich and thoughtful selection of texts. While the Singaporean selection in Second Link had mainly featured plays, poetry and novels from established writers, Alfian pulls together an almost entirely new set of literary treasures and spreads his canvas wide, throwing in amusing colonial accounts of Singapore, letters and petitions by members of the public, little-known songs and bittersweet meditations on national identity. Each extract is also presented in chronological order, captioned and accompanied by evocative visuals, helping audiences appreciate the context of the works.

We have a good mix of the familiar and the unusual - an extract from Kuo Pao Kun's seminal multi-lingual play Mama Looking For Her Cat performed entirely in Tamil and Hokkien stands out and other pieces such as Arthur Yap's 2 mothers in a hdb playground and Claire Tham's Highway immediately resonate with the audience by bringing key Singaporean traits to the fore. Kudos to Alfian for also keeping the selection up-to-date and including works from recent years such as Haresh Sharma's politically-charged Gemuk Girls, Tan Tarn How's insightful Fear of Writing and Amanda Lee Koe's charmingly nostalgic Flamingo Valley.

There is strong work by the Malaysian ensemble and Anne James and Ghafir Akbar stand out for their engaging performances. One is particularly taken by the stirring extract from Gopal Baratham's novel Sayang, which in many ways captures the soul of this first half: the unique admixture of joy and grief one feels when confronted with the Singapore Story; a narrative that is largely monolithic but which contains so many rich, multifaceted aspects should one take a closer look.
﻿

The Malaysian selection is titled Tikam-Tikam: Malaysia@Random 2 and rather than proceeding in a chronological fashion, the audience gets to choose the order in which the extracts are performed by picking pieces off a giant board. Naturally, not all the texts can be performed in the allotted time span of one hour so each performance will invariably be different. While this charming randomness presents a nice contrast to the neat, structured tour through Singapore's literary history, I note that very little has changed on the Malaysian side. Indeed, more than three-quarters of the extracts in Tikam-Tikam are the same ones presented in Second Link and there is not much of a sense that something new has been provided for the audience to chew over.

The Singaporean quintet dive into the material with relish and despite the obvious difficulty of working with a new sequence for each show, the scenes are executed with polish, panache and effortless pace. Classic pieces from Hikayat Abdullah and Sejarah Melayu (The Malay Annals) go down well and there are many extracts that explore folklore, culture and politics not just exclusive to Malaysia but which are representative of both countries. In general, the tone is far more jovial and relaxed than the first half and the actors have a lot of fun with the material. Sharda Harrison and Siti Khalijah are a delight to watch; the former's rendering of Sir Stamford Raffles' crisp, British-accented Malay and the latter's portrayal of a kindly but ignorant American grandmother when faced with "Asiatics" are highlights of the evening.

Interestingly, while I felt the Malaysian selections in Second Link has been far superior, they somehow paled in comparison to the Singaporean ones this time round. This may well be because the Singaporean texts were far more diverse but one cannot ignore that fact that the overall production is fairly long and one's attention begins to slide by the second half. I also rather lamented the exclusion of Huzir Sulaiman's hilarious Atomic Jaya from the Malaysian mix; this had proven one of my favourite extracts in Second Link and I felt that the extract from Stella Kon's Emily of Emerald Hill selected here - which is likely to be the text most recognisable to Singaporean audiences - was not quite the best one from the play.
﻿

Another Country ultimately emerges  as far more than the sum of its parts. It reminds us that while Singapore and Malaysia may be two nations with different politics, economies and societies, our hearts beat as one. And this is perhaps best summed up in the beautiful ronggeng presented by all ten performers as the finale piece: instead of merely dancing around each other, let's hope that "our hands would clasp" and we genuinely engage with our neighbours, viewing them not just as another country but, hopefully, an extension of our own.