The SRT tends to rely on spectacle to draw in the crowds for its annual Shakespeare in the Park series. Over the years, we've seen yachts, helicopters, multi-level sets and staggering audio-visuals grace the outdoor stage at Fort Canning Park. Yet, all these theatrics have somehow sidelined the importance of language and good, old-fashioned acting. I'm therefore delighted to see a return to substance in this year's production of The Tempest directed by Braham Murray, easily one of the strongest editions in the series yet. Here, finally, is a Shakespeare production that eschews gimmicks in favour of the primacy of the written text. 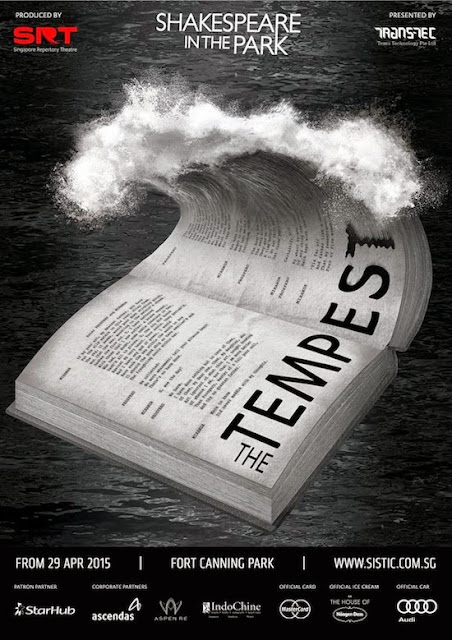 Murray, former artistic director of the Royal Exchange Theatre in Manchester, delivers a highly competent classic production that captures the enigma of this play that resists the clear labels of "comedy" and "tragedy". Murray's production also appears inspired in more ways than one by Sam Mendes's Bridge Project version, seen in Singapore in 2010; the image of Prospero as a man learned in the art of magic is manifested not only in the pile of books placed prominently in a corner of the stage but in the very set itself: a towering, fourteen-metre-high open book stunningly designed by Simon Higlett.

Murray makes a wise choice in cutting the opening scene, catapulting us straight into the action. We are immediately drawn into the storm conjured up by Prospero (Simon Robson), the rightful Duke of Milan, who aims to exact revenge on the men who usurped his rightful position and conspired to banish him from his realm, resulting in him being marooned on an island for the past twelve years with his daughter. The raging tempest is presented simply and breathtakingly with a giant, shimmering blue cloth thrown from the top of the set, engulfing the men’s ship.

Robson turns in a nuanced, compelling performance as Prospero and his delivery of the verse is by turns majestic and menacing. Unlike the rather self-indulgent, librarian-like figure played by Stephen Dillane in the Mendes production, Robson's Prospero comes across as a truly formidable wizard, standing centrestage with tousled hair and wild, swirling cloak. His final soliloquy is one of the best I have seen yet; he walks right into the audience as he beseeches us to set him free with our applause and one feels, more keenly than ever, the voice of Shakespeare breaking through in this, his final play. Where Robson falters is in catching Prospero's transition from an angry sorcerer bent on revenge to a man who learns to forgive those who have wronged him; this subtle but important change in demeanour is never fleshed out.


There are some excellent performances by the talented cast. Terence Wilton and Ian Shaw are superb as Gonzalo and Alonso respectively. Daniel Jenkins and Shane Mardjuki make a fantastic double act as drunken steward Stephano and jester Trinculo in a comic subplot – indeed, it is refreshing seeing Jenkins flex his comic muscles on stage after a string of rather serious parts. As young couple Miranda and Ferdinand, Julie Wee and Timothy Wan make a cute and likeable pairing but could have displayed far more chemistry. Wee's occasionally too-high pitch and Wan's wavering accent also prove distracting.

Theo Ogundipe – tall, swarthy and boasting a rich, orotund voice – brings an impressive physicality to Caliban, the island native enslaved by Prospero. But while he excelled in the physical comedy with Stephano and Trinculo, he never quite managed to evoke in me a true sense of pity for his predicament. The colonial implications of the relationship are by no means new, though one wonders if these would have gained even more currency by portraying Caliban as an Asian, perhaps a Malay "native", which would anchor the play in the local milieu. Seeing as the spirits of the island seem to have an Asian feel with long red hair and white gowns (vaguely resembling pontianak) this might not have been entirely out of place.


I was a little bemused by the choice of Ann Lek as Ariel, who appears to be a cross between a K-pop star and martial arts heroine in her crinkly silver suit with trailing sleeves. One of the problems of having people who can actually speak Shakespeare well is that it throws less experienced actors into sharp relief, and unfortunately Lek, while impressive in her singing abilities and altogether serviceable in her delivery, compares badly to Robson's Prospero. I would also have liked to see the relationship of Prospero and Ariel being explored in more depth.

Murray keeps the pace of the production tight and snappy but more thought should have been put into orchestrating the action onstage and ensuring a balance between movement and stillness. The problem with the scale of this stage is that it can sometimes engulf actors. A scene where Prospero spies on Miranda and Ferdinand from an elevated pigeonhole loses some of its impact because he is physically so far away. Scenes with the ensemble of fairies feel rather piecemeal and it might have been better to keep them constantly onstage as a fluttering, otherworldly omnipresence. 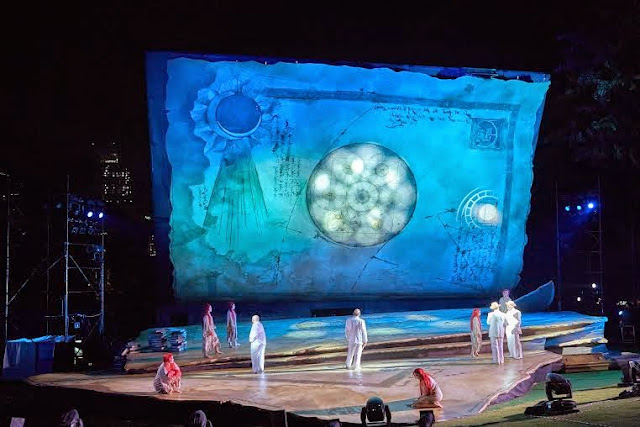 All in all, this latest theatrical adventure by the SRT has much to recommend itself. While The Tempest is by no means a play that immediately captivates with fully fleshed-out characters and intrigue-ridden plot, it is a pleasure to see a play performed by a strong, evenly matched cast that does justice to the weight and rhythms of Shakespeare’s verse. It is a little ironic that this, one of our best local Shakespeare productions to date, also happens to be the least "local" of the lot: virtually the entire production team and most of the lead actors hail from abroad. We obviously have some way to go in cultivating a truly indigenous Shakespeare experience but kudos to the SRT for bringing the very best of world talents to our island and allowing us to soak it all in under the stars.