Descendants of the Eunuch Admiral


The Esplanade's annual Studios season is a platform for contemporary, often experimental works that seek to challenge audiences with their themes and multi-disciplinary reach. This year, however, in conjunction with the country's fiftieth birthday, the team has put together a sprawling retrospective of Singaporean theatre, featuring full-length revivals and dramatised readings from fifty significant local plays. In keeping with the theme of showcasing and celebrating these classics of Singapore theatre history, we've seen solid, faithful productions of Stella Kon's Emily of Emerald Hill, Huzir Sulaiman's The Weight of Silk on Skin, Haresh Sharma's Off Centre and Tan Tarn How's The Lady of Soul and Her Ultimate "S" Machine, each helmed by a director who has not been associated with the original production.

Then we have Kuo Pao Kun's Descendants of the Eunuch Admiral. To many theatre practitioners and students, this is probably one of the most significant of the five plays given a full-length restaging in the season. Kuo's status as one of the pioneers of Singapore theatre and the reputation of Descendants, one of his most well-loved and iconic plays, clearly sets a high bar. It's therefore to one's considerable chagrin that this production, directed by Jeff Chen, proves to be the most self-indulgent, irreverent and, dare I say it, experimental of the season - a brazen satire of the original play, almost. 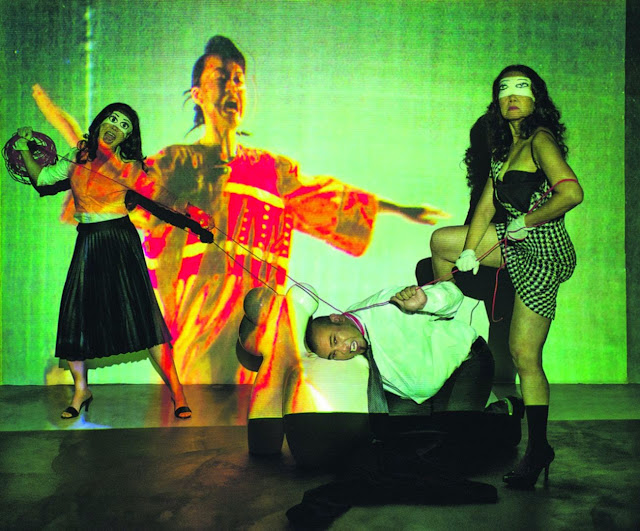 Chen's introduces two distinct layers to the play which chronicles the vast and varied travels of 15th century Chinese maritime adventurer Zheng He. The entire text is pre-recorded by a team of esteemed theatre practitioners and played for us in full. Hearing the lines beautifully rendered by individuals such as T. Sasitharan, Ivan Heng, Karen Tan and Siti Khalijah Zainal breathes fresh life into the play and truly captures our rich, multicultural society. The audio recording is augmented by a series of largely wordless scenes performed by a separate ensemble of actors (Nora Samosir, Timothy Nga, Jean Ng, Najib Soiman and Koh Wan Ching) who seek to riff on the themes of the play through little scenes that range from the macabre to the downright bawdy.

There's nothing wrong in adopting such an approach if the wordless interpretations had provided a deeper insight into the text. Instead, Chen latches on to the most obvious and literal image in the play - castration - and beats this to death through a mélange of tedious physical theatre. Limbs of mannikins are used to suggest bizarre sexual positions, images of quivering body parts are flashed on screens in unnerving close-up. A multitude of  colourful balloons are twisted into a shape resembling the penis and then gratuitously burst. A punching bag is repeatedly raised and lowered with a sickening thud amidst varying descriptions of castration.


What might have been a powerful visual symbol therefore descends into a tedious, tasteless mess that bears little resemblance to the spirit of Kuo's words. Indeed, the idea of castration in Descendants has a far more powerful resonance in the metaphorical sense, suggesting the idea of Singaporeans being culturally dislocated in a bland, modern world. The overt literalism introduced by Chen reduces the play and its powerful political commentary into farce. One is also left scratching one's head about the set, originally designed by Wong Chee Wai for courtroom drama Twelve Angry Men in 2013 and subsequently appropriated by Chen for his production LIFT: Love Is Flower The later that year. If using the same set for a third time is meant to have a deeper message, it must have escaped me.

It's ultimately the tone of the production that gets on one's nerves. There are some excellent segments in the production itself and idea of layering the pre-recorded audio text with a separate visual one would have worked brilliantly had it been executed in a more thoughtful way. The fact remains that one is likely to leave this production with images of penis-shaped balloons and naughty mannikin-sex seared in one's mind. Kuo's beautiful and haunting words are all but lost. More's the pity.