Turn by Turn We Turn


As part of a mini-series in conjunction with its 15th anniversary, The Finger Players is bringing back two of its greatest hits of recent years: Turn by Turn We Turn (2011) and Roots (2012). Crowned Production of the Year at the Life! Theatre Awards, Turn is a biographical epic based on the life of a fictitious Chinese puppet troupe and its master, Bo Yuan, over the course of the tumultuous twentieth century.

While Turn appears to be essentially a history lesson in the key political events of China’s history - taking world wars, cultural revolutions and the rise of communism in its stride - what comes across more strongly is the idea of heritage, of preserving an art form over the years and not letting it die out. In many ways, the play itself is the strongest testament to this. It is both a nod to the beginnings of The Finger Players as a puppetry troupe and a way of passing on these skills to a whole new generation of performers (particularly the young Finger Players Associate Actors in the cast) who would hopefully be able to carry on this ancient tradition. 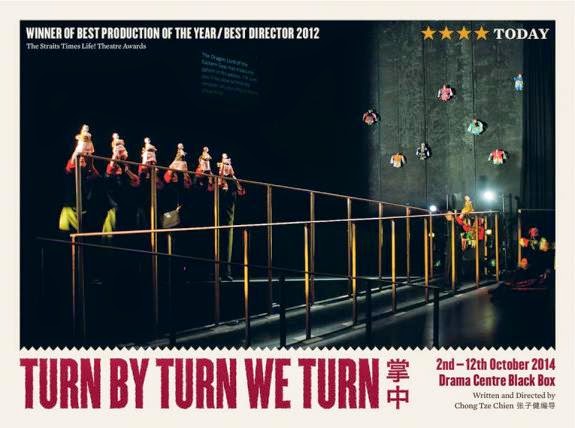 Veteran actor Ong Kian Sin certainly holds his own as Bo Yuan and displays great skill in handling the puppets and extracting wonderfully expressive actions from them. While there may be a slight gulf between the dexterity of the more experienced actors such as Goh Guat Kian and Ang Hui Bin and the newer members of the team, the commitment and enthusiasm of the ensemble is evident and they are a pleasure to watch.

Playwright and director Chong Tze Chien shies away from overt sentimentality in his direction and the play is instead bolstered by quiet human fragments that appear throughout the tale: the supportive wife, the steadfast members of the troupe and through it all, the man who simply wants to keep the world of his puppets alive, who never ceases to advocate the transformative power of the theatre to educate, enlighten and entertain audiences through both good times and bad.

Linking the narrative is an amusing, condensed version of the tale of the Monkey King, a perfect means of showcasing the skills of the puppeteers and giving us an indication of the range and variety encapsulated in a traditional Chinese puppet performance. There are some truly beautiful touches here and kudos to the ensemble for delivering a performance that effortlessly blends humour, action and grace.

The lighting and sound designs by Lim Woan Wen and Darren Ng respectively round off this quiet gem of a production, transforming the Drama Centre Black Box into a sloping, tiered capsule that is both epic and intimate, an ode to this rich, dynamic world that is so full of colour and character.

Legacy of the arts is a vital issue that is of continued relevance to us and one must applaud Chong and his team for their earnest endorsement of the value of age-old arts and crafts. One can only hope to see more traditional art forms being preserved and showcased in such a memorable form.