This is no warm, fuzzy crowd-pleaser. Bryony Lavery's Frozen tackles the thorny subject of paedophilia and explores this through the voices of three distinct individuals. We first meet Agnetha (Janice Koh), a psychologist who studies serial killers and seeks to view them in a sympathetic light. Then there is Ralph (Adrian Pang), a seedy, mentally troubled man who abducts and murders little girls. Finally, we encounter Nancy (Karen Tan), the mother of a ten-year-old girl who goes on an errand one day and never returns.

The play is structured as a series of alternating monologues by these three characters. It spans over twenty years and charts their complicated journeys towards emotional and mental acceptance. It’s only towards the end that the characters begin to interact and their individual stories to intertwine. 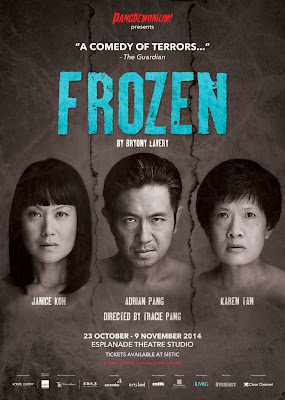 While the premise is promising, the script feels both haphazard and incomplete. Apart from a few dramatic scenes where the characters lock horns, one cannot shake off the sense of watching a passive series of speeches that do not cohere into an organic whole. The character of Agnetha, in particular, is very poorly sketched. She is largely a mouthpiece for Lavery to propound academic theories about humanizing serial killers, and her individual story arc of dealing with a broken heart and betraying a friend by having an affair with her husband seems downright incongruous.

Tracie Pang handles the subject with characteristic flair, though certain aspects of her direction feel quite heavy-handed. I didn’t see the need to be told exactly what Agnetha was typing on her laptop on a projection screen or to be informed of the date and location of each and every scene. Part of the mystery of the play is its non-linear narrative and the realization on the part of the audience of the inexorable passage of time. We should be made to do some of the legwork and figure out the contours of the plot on our own.

If there is something that truly stands out in this production, it is Adrian Pang’s admirable performance as Ralph. Pang brings tremendous empathy to this coarse, detestable character, allowing us to understand his life of quiet alienation, where solace only comes from sweet young things that happen to wander his way. Pang turns in a gut-wrenching performance that is both powerful and quietly chilling; he never makes himself the centre of attention and allows every gesture and nuance of the character to speak for itself.

In the poignant scene where Nancy finally confronts Ralph in prison, we see the spectre of an utterly broken man who realizes, albeit too late, the depth of his transgressions. We are reminded, as Agnetha says, that the difference between a crime of evil and a crime of illness is the difference between a sin and a symptom, and Pang allows us to peek behind the façade of this man to see that he acts the way he does due to forces beyond his control.

Karen Tan inhabits the role of Nancy with hearty emotion and gives a moving reminder of the difficulty of a parent coming to terms with the death of a child and trying to move on with her life. Yet her performance is let down by her making almost no attempt to ground the character in the English setting of the play.

Janice Koh, likewise, struggles (not for the first time) with her American accent as Agnetha. The fact remains that not every actor can pull off an accent. There are ways to deal with this, such as localising the script or inventing a simple backstory and changing the details of the characters. Even if there had been some attempt to suggest that the characters were of Asian descent, it would have proved far less distracting. In a play that evokes such painful, raw emotions, an obviously Chinese woman who introduces herself as Agnetha Gotmundsdottir and casually mentions that her ancestors hail from a cold, ice-bound place just sounds odd.

Set designer Eucien Chia, whose impressive, symbolic designs have won numerous plaudits, proves disappointing this time round. The set has an unfinished feel to it, with a clear plastic screen hanging upstage that reminds one of a house in the midst of renovation. The scattered photographs that constitute the floor also complicate the visual style. The only genuinely interesting touch is the series of dress-like lamps suspended from the ceiling, a spectral reminder of all the little girls who have fallen prey to Ralph over the years.

PANGEDEMONIUM has delivered a steady stream of hits over the years, so even if this latest production left me cold, one should not forget that there are precious few theatre companies in Singapore who would even dare to stage this type of play. And judging from the fact that Frozen was entirely sold out even before it opened, PANGEDEMONIUM has firmly secured its fans throughout the island. Still, one hopes that it can continue to deliver work of a consistently high quality. I can’t help but feel the script choices for 2014 have been a couple of notches below those from the previous year - and sometimes, it really is the most important decision one can make.