The House of Bernarda Alba


W!LD RICE’s Masterpiece theatre showcase at the start of the year is always something to look forward to. In 2011, Ivan Heng brought the house down with a revival of his luminous interpretation of the title role in Emily of Emerald Hill, a spectacular conclusion to the company’s 10th anniversary celebrations. 2012 saw W!LD RICE’s inaugural take on Shakespeare with a solid, effervescent production of Romeo & Juliet. And last year, Glen Goei brought back his critically acclaimed all-male production of Wilde's The Importance of Being Earnest.

The line-up of esteemed actresses for The House of Bernarda Alba, a sombre rural tale from Spanish dramatist Federico García Lorca, was enough to set tongues wagging. Coupled with a stark, stylish aesthetic, this was undoubtedly set to be one of the theatre highlights of the year. Yet, the problem clawing at the heart of this production is a mixture of overwrought emotion and slightly dubious casting. 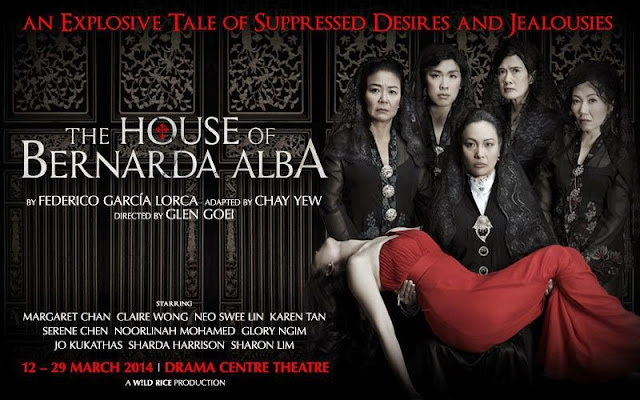 Central to the play is Bernarda (Claire Wong), the iron-fisted matriarch who declares an eight-year period of mourning in her family when her second husband passes away. Immured in an oppressive household, her five daughters languish in their isolation and hidden tensions and desires reach boiling point when a handsome suitor, Pepe el Romano, enters the scene, ensnaring the hearts of three of the sisters.

Even though Lorca deliberately strips the play of any male presence, it is the withering effects of patriarchy that are most apparent. That a women’s position in the world is defined by men is revealed as a bitter, inescapable truth. The mourning decreed by Bernarda follows in the footsteps of what had been done in her father's and grandfather's house. Her eldest daughter, the plain, 39-year-old Angustias (Neo Swee Lin), is sought after as a bride precisely because she has a fortune left to her by her father, Bernarda’s first husband. Indeed, the very sight of a line of lusty male villagers making their way to the field is enough to send the women’s hormones into overdrive.

Claire Wong grounds the play with a chilling presence that give her scenes both grandeur and gravitas. We see the cracks in her Bernarda, that cold matriarch who mocks her poor relatives and viciously scrubs make-up off her daughter’s face but shows a softer side when trading anecdotes with her trusted servant. While Wong's dramatic outbursts could certainly have been scaled back, her carefully bottled up emotions make her final, bitter breakdown all the more poignant.

Particularly noteworthy amongst the cast are Jo Kukathas, who steals all her scenes as cynical, long-suffering servant Poncia, and Noorlinah Mohamed, the somewhat overlooked daughter Martirio whose romantic feelings for Pepe el Romano are quietly ignored. Comparative newcomer Glory Ngim proves herself to be every bit the equal of her experienced co-stars with her rendering of rebellious youngest daughter Adela who pursues Pepe el Romano with disastrous consequences. While there is little one can fault with the individual performances, the collective effect of all the drama makes for uneasy, often tedious viewing and one wishes that certain scenes had been toned down.

Goei has taken Chay Yew’s slightly streamlined 2000 adaptation of this classic play and clothed it in a lush Peranakan setting. Visual splendour appears to be the watchword of the production: the stunningly choreographed sequence where the female mourners return from the church stands out for its opulence. Goei breathes life into Lorca's lyrical text, both in the midst of fraught dialogue and fractured silences. In an evocative scene, the bookish Amelia (Serene Chen) stands in the courtyard in the middle of a storm, enjoying the clandestine sensation of being drenched by the rain. An awkward tea party to entertain a friend makes for another compelling scene where the simple act of stirring a teaspoon effectively adds to the tension.

The production team works wonders on the stage. Set designer Wong Chee Wai frames the stage with the shuttered windows of a traditional Peranakan house and an immense front door, giving us a constant reminder of the cloistered, oppressive setting. Working almost primarily with a colour palette of black, costume designer Ivan Heng does stunning work, dressing the women in a chic assortment of kebayas and accessories, all the while emphasizing the subtle differences between the characters through different styles, shades and textures. Kudos as well to Lim Yu-Beng who creates an atmosphere of intrigue and passion with his dusky lighting designs.

Yet, all said and done, one wonders what the Peranakan setting really adds to the production apart from a classy aesthetic. All the characters retain their original Spanish names and if we are meant to be in colonial-era Singapore, this is certainly not apparent.  Perhaps adding in the odd Malay or dialect phrase would have helped to anchor the setting. It makes little sense for two Indian maids to have names like Poncia and Blanca.

Another nagging question on my mind is director Glen Goei’s choice in casting. Neo Swee Lin appears incongruous in a role where she looks almost similar in age to her onstage mother, the versatile Karen Tan is sadly underused as acerbic sister Magdalena and perhaps most unfortunately, the grande dame of Singapore actresses, Margaret Chan, appears in a role that barely does justice to her immense talents. No doubt, Chan makes an impact in her brief appearances as Bernarda’s deranged, wedding-dress-clad mother, Maria Josefa, though surely no one could have done a better Bernarda?

Ultimately, this brooding, intense production of Bernarda Alba ticks all the boxes for a night of dramatic passion but one wishes that the emotions had been more finely calibrated and more thought had been put into the casting. One cannot help but feel rather overwhelmed by the staggering display of histrionics.