Shakespeare famously told us that the course of true love never did run smooth and this deliciously light and frothy opera, the third and final of Mozart’s collaborations with librettist Lorenzo Da Ponte, follows in the vein of the Bard’s best comedies by reminding us of the eternally changeful nature of young love.

This SLO production of Così fan tutte benefits tremendously by director Tom Hawkes’s emphasis on playing up the physical comedy and breathing new life into the opera by transplanting the action to a grand hotel in early twentieth century South-East Asia. Don Alfonso (David Hibbard) coaxes his two young friends, Ferrando (Raffaele d’Ascanio) and Guglielmo (Park Byeong-in) to wager that their fiancées Dorabella (Du Qin) and Fiordiligi (Rachelle Gerodias) respectively, would within the space of twenty-four hours, be unfaithful to them and seek new lovers if they were given the chance. For the sake of entertainment, he has the two men pretend to be summoned by the army, only to return in disguise as strangers with the intent of wooing each other’s girl. 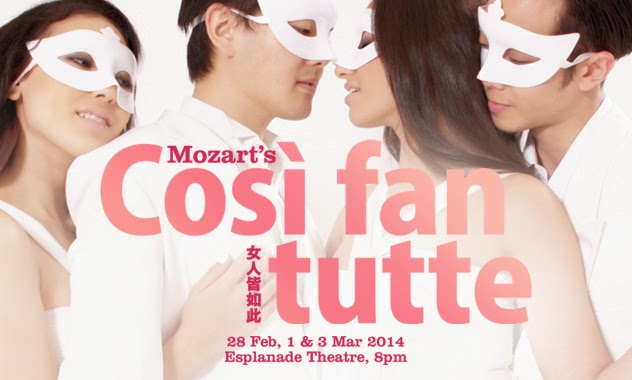 There is obvious misogyny here in the idea of a devoted woman being played around by men and it is to the credit of the two wonderfully strong and poised female leads that these characters emerge rich and nuanced rather than mere caricatures of their gender. Interestingly, Hawkes makes a deliberate attempt to suggest that there are no easy answers in the game of love. The closing tableau sees one of the couples happily ending up together but the other couple obviously estranged as a result of the chicanery. We are left asking ourselves: were the girls secretly aware of the fact that their lovers were in disguise all along and had merely pretended to fall in love with the strangers?

Conductor Joshua Kangming Tan does a generally capable job conducting the orchestra and Mozart’s jaunty score buoys the action along deftly. However, there are slight problems with the acoustics. Italian tenor Raffaele d’Ascanio proves quite difficult to hear in the first half of the opera and it is only later that his voice grows significantly in terms of volume.

There is great rapport amongst the tight cast of six and Hawkes keeps the action quick and snappy. The women in particular prove very impressive with their singing, with a special mention to soprano Yee Ee-Ping for her highly entertaining supporting role as the worldly maid Despina, who is complicit in Don Alfonso’s charade. She is excellent in her impersonations of both a traditional Chinese doctor and a bewigged lawyer and lights up the stage in her scenes.

The evening also stands out for the excellent production elements. Set designer Christopher Chua conjures up an impressive set that is reminiscent of Raffles Hotel, channelling a languid colonial vibe. Adrian Tan adds visual pizzazz with his striking lighting backdrop. Veteran costume designer Moe Kassim also does a great job in marrying ethnic influences with Twenties glamour in his costumes, showing a wonderful attention to detail even in the outfits of members of the chorus who only emerged in selected scenes. It is these touches that lift the production, giving it both sophistication and a piquant Asian flavour.

Indeed this production of Così fan tutte makes for a truly entertaining night out at the opera and it is great to see the SLO equally adept at delivering comedy and quality singing.