Teater Ekamatra's first offering for the year showcases a rather different side of Associate Artist Irfan Kasban's work. Eschewing the lyrical, meditative style seen in his recent productions such as Hantaran Buat Mangsa Lupa and This Placement, Tahan is a simple coming-of-age story about a policeman undergoing his two years of national service at a neighbourhood police post.

Structurally, Tahan tends to meander due to it being composed of a series of vignettes which do not always flow neatly from one scene to the next. Yet, there is a quiet strength in its ability to highlight the banal, everyday routines of policemen we so often take for granted - the mind-numbing 12 hour shifts, vexatious complainants and the officers' private lives and grievances. The importance of never letting one's uniform stick to one's body, as one character is told early on in the play, is driven home; one should not lose oneself in the process of doing the job.

The seven-actor ensemble acquit themselves well in a variety of roles. Farez Najid, as rookie Corporal Adil, starts out a little tentative but finds his feet as he grows and matures over the course of the play. There is also very good work by Isabella Chiam (who stands out as a screaming auntie) and Tan Shou Chen in his dual role as a detached, scholarly inspector and a campy OIC. 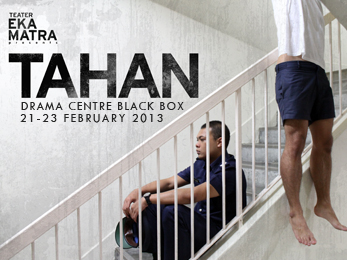 Irfan has an excellent ear for dialogue - both comic and tragic - and scenes such as HDB neighbours screaming vulgarities at each other and parents being informed of the death of a loved one have a strong stamp of reality. On the technical side, Bani Haykal does evocative work on the live soundscapes. While the production is more than competent, the philosophising by Adil could have been trimmed down and I found the repeated voice-overs detailing aspects of police routines somewhat laboured. There's also a scene involving a "powder dance" by one of the characters which seemed nothing more than an aesthetic indulgence.

We've had the world of the army splashed on the stage many times so it's a welcome change to see our men in blue get their moment. Tahan is a warm, wistful and immensely watchable ode to our policemen and despite its minor shortcomings, this is one script that is full of humanity and heart.