Puccini's Madama Butterfly, with its charming music and romanticized image of the East, has long been a staple of the world operatic repertoire. It was a pleasure to have the Singapore Lyric Opera bring back this well-loved piece to cap off their 2012/2013 season.

The title role of Cio-Cio San is magnificently sung by Japanese soprano Mako Nishimoto, who made her international debut in the same role in the Philippines only last year. Nishimoto may not immediately look the part of a delicate, fifteen-year-old geisha but her powerful vocals and tender gestures steal every scene. From the start, she evokes the image of a strong and independent woman who knows her own mind. She is especially heartbreaking in the finale sequence where she realizes the inevitable end to her situation: letting her child go and sacrificing herself. 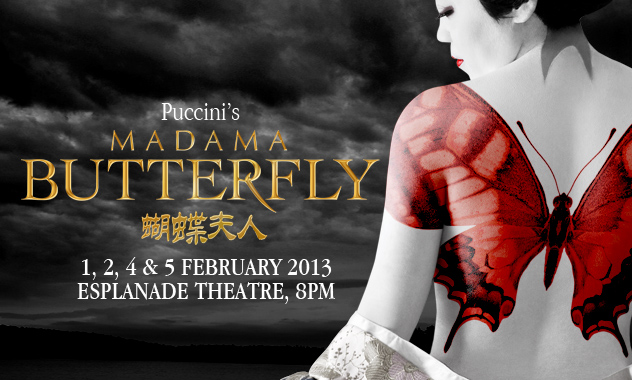 Spanish-born tenor Israel Luzano is solid and grounded as US navy officer Pinkerton and displays excellent chemistry with Nishimoto, particularly in their long, tender duet at the end of Act I. There is also good work by the supporting cast, particularly Anna Koor as Butterfly's loyal maid Suzuki, Lemuel de la Cruz as the obsequious matchmaker Goro and the adorable Andrei David Rasmussen in a non-speaking role as Butterfly's son Sorrow. However, one of the problems was the sound quality of the performers. Even from a stall seat, many of the cast members were drowned out by the orchestra. Conductor Joshua Kangming Tan does a magnificent job in bringing out the rich texture of Puccini's score but I'm not sure if the sound levels could have been adjusted such that the voices could be heard more clearly at times.

Set designer Christopher Chua opts for simplicity in the staging and the set comprises a traditional Japanese wooden platform with translucent sliding doors that is largely devoid of furniture. The translucent doors are used to good effect to herald the arrival of characters and there is beautiful use of shadows at the end when we see the silhouette of Pinkerton arriving to claim his son. The costumes (designed by the late Kenneth Rowell and loaned by the West Australian opera) are beautiful, especially the outfits of the wedding guests in Act I.

Veteran director Andrew Sinclair manages the pace and stage action well and even brings out occasional moments of comedy: the jealous cousin at the wedding, the servant who is tardy about bowing and the slimy matchmaker hovering in the background. Structurally, it would probably have been better to insert a break between the second and third Acts (both intervals could have been cut to ten minutes to reduce the overall running time). The musical interlude between the Acts seems to outstay its welcome and it's a little dull to stare at Butterfly gazing out at a full moon for several minutes before the action proceeds.

All in all, Madama Butterfly is one of the most polished and pleasing productions by the SLO in recent years. The usual problems of uncoordinated surtitles, uneven casting and unnecessary directorial florishes are absent and we are left with an evening that is both simple and stunning. My only beef with the production was perhaps more due to the fact that I've never seen Puccini's opera before. Hardly anything seems to happen over the space of nearly three hours: she marries him, she pines, she dies. There are no subplots or comic characters to liven up the action and the opera struck me as being rather singular. For fans of classic romantic tragedy though, this Butterfly certainly soars.