This engaging site-specific piece on the theme of displacement plays out like an art installation. We are ushered into the romantically lit former Geylang Fire Station by its many cheerful denizens. We are then slowly led to the upper floor of the building where we encounter rooms occupied by various people: one gazes out plaintively at passing traffic, another flails in a puddle of water while a third methodically fashions face masks out of aluminium foil to form an altar of frozen emotions. 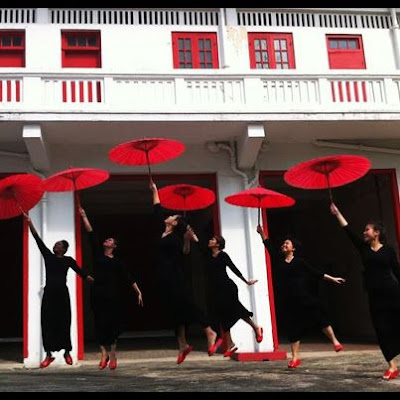 Part of the beauty of this near-wordless piece of theatre is that we, the audience, feel as displaced as the performers. No one tells us where to go for the first forty-five minutes and we flit from one space to the next like nomads.

Eventually, the community gathers together for a final "family photo" and we sense their melancholy at losing this beloved place of theirs. As their grief reaches its zenith, the clouds spectacularly break and the performers rush out into the torrential rains in a poignant, dream-like frenzy. The freak weather on the opening night could not have been more perfectly planned and it made the show all the better. Mesmerized audience members watch as the drenched performers collect water in bowls, waltz with umbrellas and run around, trying to make sense of their predicament. Slowly, resignedly, they wander barefoot into the world outside in search of another sanctuary, melting into the night. 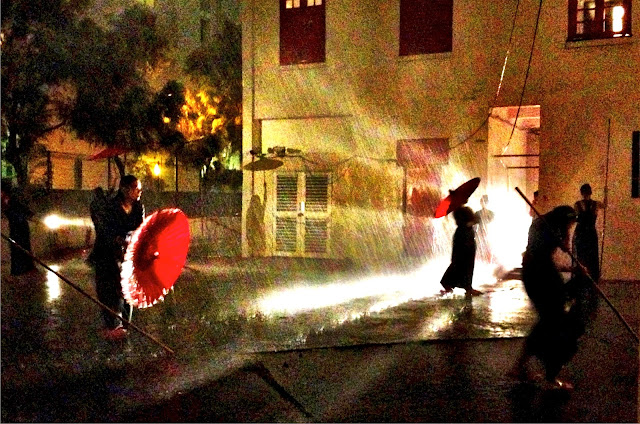 Director Irfan Kasban has pieced together another production that is rich in its visual aesthetic and an apt tribute to forgotten spaces in a city which is so caught up in glorifying the glittering future at the expense of the past. While the meandering nature of the piece makes it feel a little unfinished and patchy, there is beautiful attention to detail in the objets d'art thoughtfully scattered all over this little-known landmark, once the site of bustle and activity, but now a shuttered space collecting dust. The performer-collaborators also deserve much praise for carrying on with such vigour despite the relentless weather.

All of us tend to feel displaced and rootless as we search for our identities in this constantly-evolving global village. This production conjures up, in a stirring way, the despair of the dispossessed.