Goh Boon Teck’s Purple, a play inspired by the life of Singaporean transsexual Maggie Lai, is without doubt, a significant work of local theatre, having been performed to sold out crowds in both 1995 and 1998. Behind the racy lifestyle of this movie star, stripper and call girl extraordinaire is the tale of one woman’s journey to self-acceptance and her battle to stand up for who she is. 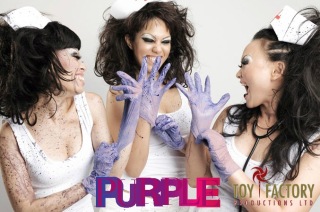 Condy has been known to play with unconventional spaces, exploring locations such as a bar (Can’t Stand Up for Falling Down) and a beach (Sonnets for an Old Century) in previous productions. In Purple, she uses another interesting venue: a multi-purpose events hall at the top floor of a shopping mall. The action proceeds on a raised central stage surrounded by the audience, festooned with colourful streamers, rings and other carnivalesque elements. As we take our seats, we are greeted by earthy usherettes (Matilda Chua, Elizabeth Loh and Rebecca Skyperman) who draw our attention to the veritable aberration of nature lurking behind the screen and provide lascivious banter, much like circus ringmasters warming the crowd before the main act.

All this makes for a good preamble but alas, once the screen goes up, revealing a miserable, bedraggled Maggie (Shane Mardjuki), I start to feel that perhaps Condy has not thought this staging through. The configuration of the space results in rather awkward blocking where, despite the actors' best efforts, people seated at the sides do not get a good view of the scenes. There is also a wide gap between the stage and the audience and Condy rarely allows Mardjuki to get up close with us, having him deliver most of his lines on the stage. I end up feeling quite distanced from the action.

Another reason why this production of Purple falters is due to Mardjuki's performance. Maggie Lai by no means an easy character to play and Mardjuki unfortunately does not prove himself the equal of this demanding role. Much like in Twelfth Night, I feel that while he delivers all his lines very well, he lacks conviction in what he is saying. His performance remains carefully reined-in rather than raw and emotionally naked. One does not feel the pathos of Maggie as an outsider and I constantly feel myself watching Mardjuki the actor first and Maggie the character second.


That being said, Mardjuki certainly makes a good attempt to inhabit the role of a transsexual woman. He succeeds in rendering the feline, huskily-voiced Maggie and provides a stark contrast when impersonating the other male characters in her life, even if his attempts at dialect do not always hit the mark. Yet, Mardjuki could have pushed his some of his scenes a lot further. The striptease sequence could have revealed a lot more flesh (we don't even get to see his bare shoulders!) and a pole dance, while competently performed, appears mechanical rather than teasingly seductive.

Maggie’s nearly 100-minute long monodrama is occasionally broken up by the three supporting actresses, playing an array of characters ranging from sadistic nurses to leering uncles. A particularly gripping scene involves Maggie's sex change operation, each step being clinically described by the nurses while slowly smearing and dripping purple blood all over their hands. It's a visceral reminder of the immense pain and sacrifice one undergoes as part of such a process and makes us feel extremely uncomfortable.

The three actresses function very much as the voice of society, representing the censure of the public against anyone perceived as being contrary to accepted norms. Their characters are deliberately overplayed and made provocative to invite the audience’s indignation and this, by and large, achieves its effect. Indeed, the trio could have been incorporated into more of the scenes. A scene where Maggie describes peeping at her teacher in the school toilet, for example, could have been portrayed by the other actors to milk the comic potential. I would also have liked to have seen Maggie's stoic father at least once rather than just hearing about him all the time. I felt the addition of songs (such as I am Woman and Little Girl Blue) didn't contribute very much to the narrative, providing at best a break from all the exposition. Worse, the only competent singer out of this group is Rebecca Spykerman, the other two proving to be rather off-key.


Ultimately, despite all the shortcomings of this production, I feel that Condy ends it on a strong note with Maggie gaining her dignity. The three actresses perform various acrobatic stunts while Maggie, having reached the end of her story, enters one final time in a shimmering gown, circles the audience and walks out gracefully. She is no longer the circus freak or an outsider but a person who has finally come to terms with herself.

I'm glad that Toy Factory decided to bring back Purple in this, their only public performance of the year. There are precious few local plays about transsexuals (Michael Chiang’s Private Parts being a notable example) and these are stories that deserve to be seen and heard. While the bawdy theatrics and uneven central performance make this staging of Purple much weaker than its predecessors, the soul of Goh’s play remains intact. After all these years, Purple still has the capacity to move.