The Necessary Stage and TRAFIK
The Esplanade: The Studios
Esplanade Theatre Studio, Singapore


Crossings is a multidisciplinary piece of devised theatre between TNS and Croatian collective TRAFIK, drawing on the idea of human connection and interaction. It was formulated over a period of several months between the two theatre groups where the scenes were put through an extensive workshopping process. The end result seems to be the theatrical equivalent of metaphysical poetry, where, in the words of Samuel Johnson, heterogeneous ideas are yoked by violence together. 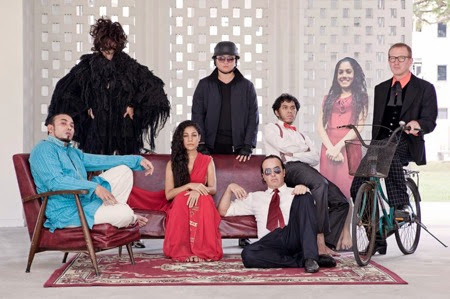 Crossings does have some semblance of a structure by being composed of five segments, conveniently signposted for the audience and further detailed in an insert to the programme (without which, I suspect, most of us would be quite lost). These segments however rarely come together in a sensible or organic manner. The main problem seems to be the tone taken by each company. The rich visual tableaus from the TNS performers sit uneasily with the quixotic, quirky interludes by the guys from TRAFIK.

The Croatian segments of the performance draw strongly on the history and cultural identity of Rijeka, the country's third largest city and hometown of TRAFIK. For instance, there is a sensual dance-duet about French novelist Jean Genet who was imprisoned in Rijeka in the 1930s, a cheeky lip-synched song about Italian poet and political figure Gabriele D'Annunzio and a bawdy representation of Rijeka as a whore, pulling out and consuming the flags of all the states that had ruled the country in the 20th Century from the brief recesses of her briefs.

The parts performed by the TNS actors however have barely anything to do with Singapore itself: a heady love-affair between a man and woman, the arrival of a mysterious cloaked stranger, a woman pining in exile due to society's condemnation. Apart from a vaguely Indian aesthetic in the last vignette achieved through the use of candles, incense and saris, I'm not sure how this loosely termed "Asian Myth" complemented the more detailed and focused exploration of national identity by the Croatians. 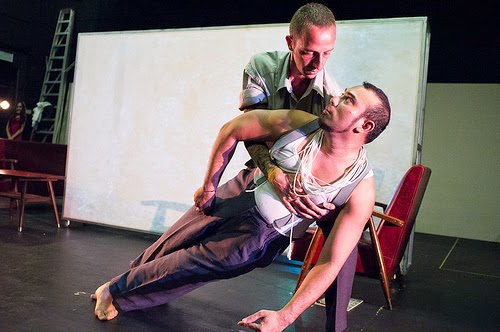 One theme that comes across is the transient boundary between the real and virtual worlds. We are shown several segments of the performance on film before seeing the real-life performers on stage. The image of Žak Valenta carrying a life-sized cut-out figure of Sharda Harrison through the streets of Rijeka is a reminder of the gulf between the real and the imagined in today's society where we frequently interact with people we have barely met in real life. When they finally meet in person at the end, it is a tentative and polite exchange where myths about each other are debunked.

There is also a sense of the unity and interdependence between us, despite our many differences. A brief but poignant segment called "Tsunami" brings a scattered group of people together to seek refuge against an external threat. A wistful film sequence at the end shows all the performers walking jauntily along a wall dressed in each other's outfits, quite literally stepping into each other's shoes and celebrating the awesome and awkward results.

Sound artist Bani Haykal, composer Josip Maršić and multimedia artist Loo Zihan supplement the melange of scenes with an evocative visual and aural texture. There is also a standout performance by Sharda Harrison whom I've only seen previously in a brief comic role in The Kanjoos. Here, she is positively radiant and marks herself out as both a talented actress and gifted physical performer. On the Croatian side, the wonderfully expressive Edvin Liverić performs his largely entertaining scenes with gusto.

As I watched this performance, I found myself making inevitable comparisons with another of TNS's famous works, godeatgod, most recently staged as part of this year's NUS Arts Festival. While I struggled with the disjointed, disparate scenes in both plays, I found myself much less frustrated and alienated by Crossings as a whole compared to godeatgod. After all, the theme of interaction (or lack thereof) in our modern world is one that resonates more strongly than a broad existentialist notion of God being put on trial.

Indeed, there is a strong aesthetic appeal to this collaborative endeavour. However, one would struggle to walk away from this bewildering pastiche of scenes with more than a vague notion of the Bigger Picture. Perhaps it's best to just appreciate each image as it appears without looking into it too deeply for hidden meanings and connections. Crossings, after all, can be transitory spaces where different things come together and sometimes, everything is just a big, luxuriant swirl.