More than half a century after it was written, Gore Vidal's incisive play about the goings-on in a presidential election still rings true. Set in a presidential convention in Philadelphia in the summer of 1960, The Best Man is about two front-running candidates trying desperately to garner their party's votes. Watching the trademark mud-slinging and underhanded antics of two men trying to outdo each other, one wonders if much has changed in all the years of presidential politics.

Michael Wilson's superb revival is lifted by an all-star cast. John Laroquette gives an excellent performance as steadfast, ethical candidate William Russell who manages to remain level-headed and likeable despite all the potshots made against him. There is solid support from Candice Bergen as his estranged wife who initially accompanies him to the convention just to keep up appearances but grows closer to him as she witnesses his mettle through a brush with political scandal, showing that true emotion can still transcend the artificial world of political racketeering. 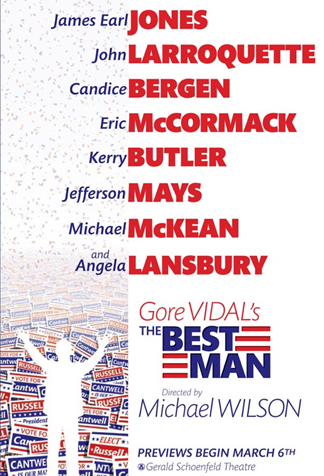 Eric McCormack of Will & Grace fame was less impressive as smarmy Senator Joseph Cantwell. Though McCormack was competent as the younger, more ambitious man out to thwart his rival at the earliest opportunity, I couldn't help feeling that he didn't add much colour to the character. Even more lacklustre was Kerry Butler as his vivacious wife who ended up looking and sounding like a Barbie doll slightly past her prime.

James Earl Jones as former US President Arthur Hockstader steals the show in all his scenes, his sonorous baritone ripping through the auditorium. In a delightful scene, he intones "the Army!" when confronted by an ex-militaryman spilling dirt on one of the candidates, marching around in an exaggerated fashion before sinking on the couch. It was a great pleasure to see veteran actress Angela Lansbury on stage (my second time catching her on Broadway after her Tony Award-winning performance as Madame Arcati in 2009's Blithe Spirit). Her role as women's spokesperson Sue-Ellen Gamadge is very minor but one still laps up her endearing gestures and charming Southern accent. 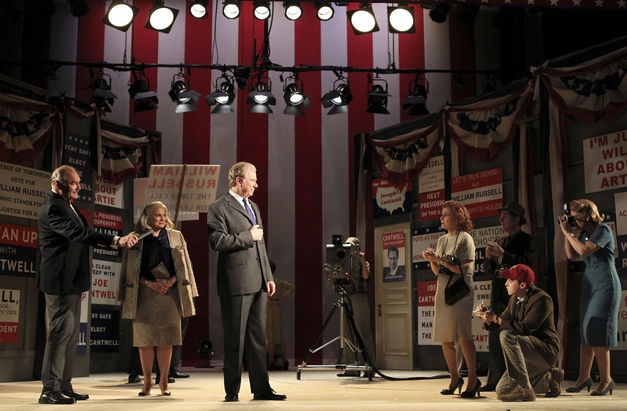 There is an impressive revolving set by Derek McLane which recreates two hotel suites in lovely period detail. The whole theatre is also decked out in red, white and blue pennants and banners, vintage TV sets showing live broadcasts and election posters, bringing a festive mood to the evening. One may argue that Vidal's ending is a bit of a cop-out by throwing an unknown third party into the limelight but in the intrepid game of politics, one always enjoys a surprise.