W!LD RICE's annual Christmas pantomime is an elaborate affair, bringing together audiences of all ages to send off the year in style. Ever since W!LD RICE's first take on the Singaporean panto in 2003, which fused the uniquely British tradition with colourful local characters and themes, they have faithfully churned out a new family extravaganza every year. And it is perhaps due to this repertoire of inventive, well-received pantos such as Cinderel-LAH! (revived in 2010 as part of W!LD RICE's 10th anniversary celebrations) that I feel this year's production gleams but fails to truly sparkle. 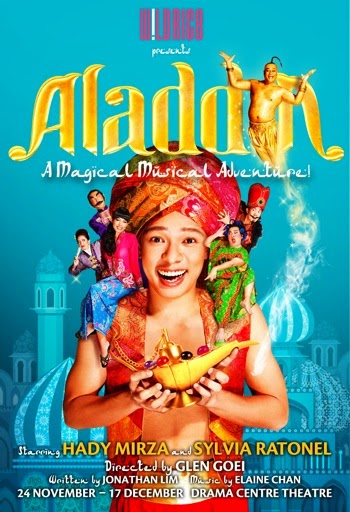 This year sees the return of Aladdin, a panto which was first staged by W!LD RICE in 2004. The script has been entirely rewritten by Jonathan Lim of Chestnuts fame and features his trademark mash-ups and comic interludes. Political and pop culture references litter the script and the lyrics of the (mostly pop) songs have been imaginatively substituted to suit the wacky storyline. In this exuberant retelling, Aladdin is a juvenile delinquent fresh out of the Boys' Home, Jasmine is a lonely heiress in Malacca and the all-important magic lamp is sequestered in the Batu Caves. Along the way, there are monkeys, a wizard of dubious Central Asian persuasion and major family melodrama. It's all good fun and there are plenty of laughs but I found myself wishing for just a little more biting social satire and a more coherent plot. The production occasionally feels like a comedy sketch show with various scenes being yoked together - maybe it's just Lim's Chestnuts background getting in the way.

Aladdin is headlined by Hady Mirza and Sylvia Ratonel of Singapore Idol fame, both of whom make their professional stage debuts as Aladdin and Jasmine. Hady and Ratonel acquit themselves well but there is unfortunately not much chemistry to this pairing at all: they are fine individually but hardly come across as star-crossed lovers. When Aladdin gives Jasmine a lingering look for the first time, it seems almost incongruous and even the climactic magic carpet kiss looks awkward. In terms of singing, Ratonel emerges as the stronger of the two, dazzling the audience with her solo I Want to Break Free and belting out Kelly Clarkson's Breakaway with panache. Asian Idol winner Hady is immediately likeable and performs some mean gymnastics on stage but the melodramatic panto songs unfortunately do not give him the chance to showcase his impressive vocals.

The whole Apple technological craze is a recurring topic. Cue numerous iPhone references, the genie being locked in an iLamp and the wizard being punished by being locked into an phone app that resembles Angry Birds. Another theme is Peranakan culture: Jasmine's imperious grandmother is thus styled Amelia of Amethyst Rise, a humorous nod to Stella Kon's famous character (who is herself an unseen guest) and we get references to the sexual preferences of Peranakan men as well as tasty buah keluak dishes. After a while though, the jokes tend to feel a bit stale: when asked why she brought a Tiffin carrier to the Batu Caves, Jasmine brightly replies, "I'm a Nyonya, I bring kueh wherever I go."

In the wacky world of pantos, nothing is ever quite what it seems and cross-dressing is often central to the action. I was pleased to note that this aspect of the show was a resounding success. Darius Tan had proved rather disappointing as a comic sidekick in HuM Theatre's Prisoner of Mumbai Mansion earlier this year but as a larger-than-life cleaning auntie with an opera obsession, he has the audience eating out of his hand. Theatre veteran Karen Tan is also a delight as the mustachioed nemesis Wizard Abba'k'adab-rah. Her attempts at being evil and frightening seem almost self-consciously half-hearted but this is more than compensated for by her superb ad libs and sardonic jibes. "Elmo is no more" she mutters at one point, indicating her furry red staff, a joke that (perhaps fortunately) was lost of most younger members of the audience.

A crucial ingredient of a good panto is something that no actor, director or writer can anticipate - the audience's participation. You only achieve a really good vibe when the audience is loudly cheering on the heroes and booing the villains, yelling back when asked questions and genuinely being a part of the mayhem on stage. On the gala premiere night that I attended, there was a relatively good response from the crowd. However, Singaporean audiences tend to be a little reticent and there were times when, despite the best efforts of the actors, the audience was just not playing along. On that note, Darius Tan and Karen Tan did do a very good job of engaging with the audience, even singling out the occasional person to deliver a line.


As always, W!LD RICE dazzles with its excellent production values. Elaine Chan's music is fun and catchy, the set design by CK Chia is a fantastic effort for a first-timer and keeps the audience guessing where the story is going to take them and the costumes by Moe Kasim show beautiful attention to detail.

The FIRST STAGE! kids are a complete delight, scampering around as little monkeys or dressed in a brilliant medley of colours as a Peranakan chorus. It's great seeing the kids having fun on stage and this is something that W!LD RICE have really excelled in: creating a theatre occasion for the family where adults and children alike can have a good time and celebrate the festive season together. And I have to admit: that's where the real magic lies.