Do not be disappointed, Alan Ayckbourn tells us in the programme: despite the title of the play, Riley is never seen on stage. Offstage characters are not entirely new to Ayckbourn; indeed, they are a plot device used in many of his comedies. In Absurd Person Singular, we are continually made aware of the antics of Dick and Lottie Potter behind the scenes even though we never actually meet them. The entire premise of The Norman Conquests rests on what characters are doing in other places and how that affects what's going on now. In Life of Riley, Ayckbourn's 74th and latest play which premiered at the Stephen Joseph Theatre in Scarborough in September 2010, he takes the device of the offstage character to an entirely different level by making him the central character of the play.

So who exactly is George Riley? Ayckbourn chooses to reveal this in snippets as the play progresses. He presents us with his classic combination of three couples, each of whom is connected to Riley in some way. The stolid, rather ineffectual doctor Colin (Kim Wall) and his wife Kathryn (Liza Goddard) are in the midst of rehearsing a play for their local dramatic society when Colin lets slip that Riley has been diagnosed with cancer and has six months to live. A thunderstruck Kathryn immediately calls her friend Tamsin (Laura Doddington), whose husband, the successful businessman Jack (Ben Porter), is Riley's best friend. They decide to invite him to join their play to include him in their lives and also contact his estranged wife Monica (Laura Howard), who is currently living with a farmer, Simeon (Jamie Kenna). 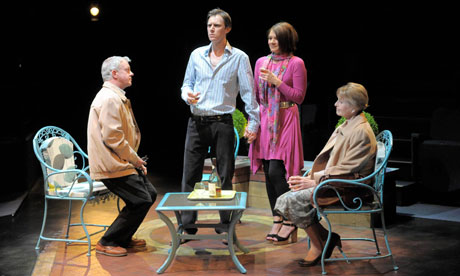 Death is a constant theme on everyone's mind and this only makes them reflect about their individual lives - those they have lived and those they want to live. Yet Ayckbourn keeps the mood light with mordant humour and his ever-present comic eye. At one point, the short, bumbling Colin and the tall, suave Jack stand next to each other at Jack's daughter Tilly's sixteenth birthday party, reminiscing about old music and subconsciously swaying together in perfect sync, two middle-aged men having a little boyish moment. There may be very little on the surface, but one soon gets the sense that these couples are not very happy and preoccupying themselves in the life of Riley is just one way of escaping from their own lives. Colin and Kathryn's married life has gone on as mechanically as the clocks he absorbs himself with and getting into an argument about when to make an appropriate pause in a play is the closest they come to a real exchange of opinions. Likewise, Jack lavishes money on Tilly with reckless indulgence almost as a way of making up for the fact that he can't achieve the same level of intimacy with his wife, Tamsin.

Ayckbourn demonstrates once again his capacity to explore the peripheral areas of the house. Having dealt with bedrooms in Bedroom Farce and kitchens in Absurd Person Singular, this time he gives us a play set entirely in three different gardens all appearing on separate parts of the stage. And in each garden (beautifully designed by Michael Holt), we see snippets of the characters and their class - the grand trees and benches of Tamsin and Jack, the conservative patio table of Colin and Kathryn and finally, the messy, earthy farmyard of Simeon and Monica. There is an constant exploration in Ayckbourn's work about the way people behave at these peripheries and we get hints of that here. Laura Howard's Monica, who keeps nervously trying to light a cigarette when her partner is not around, suggests a constant unease at trying to replace her life with another man but never quite being comfortable about it. Liza Goddard's excellent Kathryn sneaks in a covert drink every now and then as it is the closest she comes to having a thrill in her otherwise barren, sexless marriage. 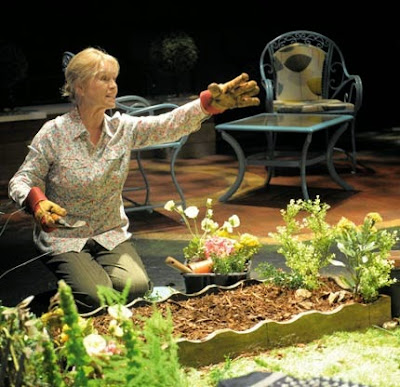 The frailty of marriage and the inhumanity of people in relationships are classic Ayckbourn themes and all this is abundantly on display here. It soon transpires that Riley has asked all three women to go on holiday with him and even though they initially deny it, each secretly longs to go: Kathryn, hoping for a revival of their once-romantic relationship in the past, Tamsin, to live in the present and distract herself from the emptiness of her own marriage, and Claire, to embrace the possibility of a newfound future. We can't help but wonder what the secret of this man is, a perfectly ordinary schoolteacher who is somehow able to draw three very different women to him even in the final chapters of his life. In a beautifully moving scene, all three men sit in their gardens waiting for the women to show up, anxious but yet resigned in the knowledge that they have somehow lost their hold on them.

It has been said that Pinter and Ayckbourn set out to write essentially the same play, only Pinter does it with a sad face and Ayckbourn does it with a happy face. Indeed, that rings true perfectly in this play where despite the moribund theme, Ayckbourn expertly calibrates the emotional barometer. In a shocking twist, we learn that it is Tilly who ends up being whisked off on holiday with Riley. But even as we sit there stunned at the implications of this, we are quickly told that nothing ever happened; it was purely a holiday borne out of companionship between a girl and her old schoolteacher. When we finally learn of Riley's passing, it is not because he has been beaten by cancer at last but due to a para-gliding accident in Tenerife. We laugh even amidst the sadness: this is truly a man who believed in living his life to the fullest. The play that begins with the looming image of death ends, aptly enough, with a scene set in a funeral but of course, just at the point when it all gets too emotional, Jack's mobile phone bangs out a ridiculous tune.

Life of Riley may not have an incredible plot; one does get the sense that a lot of the material is familiar and it's hard for Ayckbourn not to tread on the same territory after 73 plays. Yet, it does say something about a playwright to still find new ways to sustain the comic interest. Perhaps this is why he chooses to remove the main character entirely and let the play be driven purely by other people's perceptions of this ordinary-yet-extraordinary individual. While there is an intense sadness hovering just beneath, it rarely breaks through and we are swayed along by streams of good humour.

Ayckbourn directs the strong ensemble cast beautifully and ultimately, Life of Riley stands on its own as a meditation on life, death, thwarted dreams and everyday disappointments. And that, indeed, is vintage Ayckbourn.