I've longed to see a professional Ayckbourn play ever since I acted in How the Other Half Loves back in 2002 and this was the first time since I arrived in the UK that one was showing in London. Alan Strachan directs a fantastic cast (especially David Bamber and Jane Horrocks and as the upwardly mobile Sidney and Jane Hopcroft) in this revival at the Garrick Theatre and the three sets, each recreating a different kitchen, are nicely done in period kitsch. 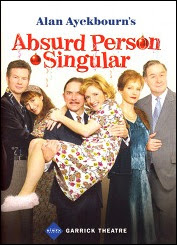 Yet, it's a pity that a play with such a depressing theme was chosen. The first Act, focusing on the eager-to-please Hopcrofts and their ridiculous dinner party guests, is typical Ayckbourn mayhem. The second Act, despite the rather morbid centrepiece of Eva (Lia Williams) trying to kill herself in every possible way - still reaches the heights of fine farce. It would have been lovely to end the play at this stage, when it becomes absolutely clear that everyone is madder than Eva. By the third Act though, the atmosphere darkens so much that it hardly feels like an Ayckbourn comedy. It's obvious that two of the couples are downright unhappy and the third - the Hopcrofts - are unhappy even if their newly-attained material success manages to carefully mask this.

Not to say that Absurd Person Singular is a bad play - it just isn't the comedy of errors/all's-well-that-ends-well formula that one typically expects of Ayckbourn. Many of Ayckbourn's best plays dissect the world of marriage and relationships, stripping it away from the heights of heady romance and exploring the contrasts between the social classes. Yet, for an Ayckbourn comedy staged over Christmas at the West End, I expected something more uplifting. And considering how prolific a playwright Ayckbourn is, there is absolutely no shortage of plays to choose from. A Small Family Business or Relatively Speaking come to mind straightaway, How the Other Half Loves treads the path between farcical comedy and social commentary nicely and even Bedroom Farce would have struck a nice mix between marital mishaps and sauciness. 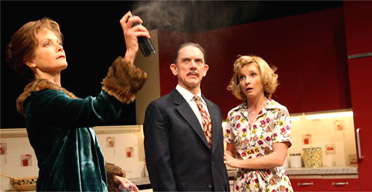 A revival should always bring something new to a play that has not been performed in years. Thea Sharrock managed that beautifully with her production of Peter Shaffer's Equus this summer and James McDonald delivered a crisp and powerful staging of David Mamet's Glengarry Glen Ross. Alan Strachan succeeds in bringing out the physical comedy of Ayckbourn well enough but despite the fantastic cast, I felt that the choice of play and way it was portrayed was not a true testament to the genius of this playwright.

This being my first professional Ayckbourn production, perhaps I am being fussy and future productions will change my perspective of his ouevre. However, all said and done, I don't think an Ayckbourn play should make one leave the theatre feeling rather depressed. And unfortunately, that's what this production did for me.