Boasting top-name actresses and a controversial theme, it will come as no surprise that Ian Rickson's glamorous West End production of The Children's Hour has been one of the most sought-after shows of early 2011. It's a pity Lillian Hellman's 1934 play has not been revived for over half a century, it being a subtle study of the impact of lies and their potentially devastating consequences in a closed community.

Karen Wright (Kiera Knightley) and Martha Dobie (Elisabeth Moss) are two close friends running a girls' boarding school in 1930s New England. A problem child, Mary Tilford (Bryony Hannah) starts a rumour about them to avoid having to be sent back to school, telling her grandmother (Ellen Burstyn) that they are having a lesbian affair. Before they know what is happening, Karen and Martha's world starts collapsing around them as rumours begin to fly amongst the moralistic community of the time. One might not be that far off the mark to suggest that Arthur Miller's more popular and richly characterised play The Crucible was inspired at least in part by the plot - after all, it was also set in a conservative New England town similarly gripped by hysteria following the lies of a group of girls.

Kiera Knightley needs no introduction, her prolific film career and immense popularity being one of the chief reasons, no doubt, for the majority of the ticket prices being marked up to £60, a new West End high. Always at home in the world of period drama, she gives an elegant and largely competent performance as Karen, her American accent only faltering occasionally. Elisabeth Moss, best known for her portrayal of Peggy Olsen in the hit television series Mad Men, is the more assured of the two and is particularly arresting in a confrontation with her thespian aunt (a delightfully comic turn by Carol Kane). 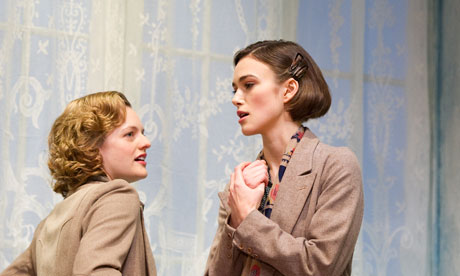 There are hardly any hints that anything is amiss in the early scenes. Karen is about to be married to Dr Joe Cardin (Tobias Menzies) and Martha is slightly upset that they have decided to have the wedding so soon as she was looking forward to their yearly holiday. It is only when Martha's aunt remarks that her apparent hostility to the marriage and Karen's fiancé is "unnatural" that we gain the first frisson of unease. But we are never given anything more than a hint.

Silence is a powerful theme in the play and Rickson's production contains many visual scenes that provide a far greater impact than the actual text. In a wordless prologue, a group of pre-pubescent schoolgirls gather around an apparently controversial book, all fighting for a closer look at its contents. We never hear what exactly Mary tells her grandmother about Karen and Martha - she whispers this into her ear - but it is apparently serious enough to warrant immediate action. There is a sense that there is a world out there that is best kept away from the surface, something that should not be referred to at all and this somehow makes it even more sordid and mysterious that if it were mentioned out loud.

Bryony Hannah gives an incredible performance as Mary and plays a young schoolgirl so convincingly that it is impossible to believe that this talented actress is actually twenty-six. Her Mary has a dark, ruthless streak that is perfectly balanced with a childlike gait. In the opening scene, she deliberately forces her way to the front of the group of girls, pulling the book away until it tears in half. This destructive bent is also paralleled in a later scene as she angrily smashes a vase on Karen's table and demands money from one of the girls in order to run away, going so far as to pin her down and stab her with a pencil. When the gormless Rosalie is questioned as to the source of the rumours, Mary lingers in the background, writhing almost as if in physical agony. Yet, she quickly regains her composure and shrewdly blackmails Rosalie into submission by threatening to expose her petty theft. 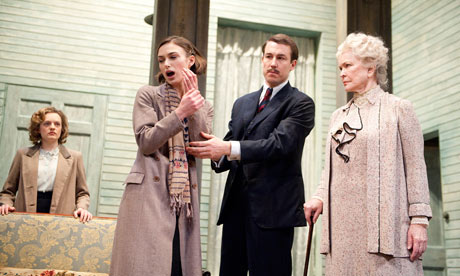 Stage and screen veteran Ellen Burstyn is suitably impressive as Mrs Amelia Tilford, Mary's conservative grandmother who takes swift and decisive action once she is apprised of Mary's tale. She is the obvious symbol of old-world morality for whom any form of unconventional relationship is an abomination. Yet, she ultimately shows the capacity for realizing her mistakes and becomes a contrite old lady desperate to make amends when she finally learns of her niece's fabrication.

Mark Thompson's set, brilliantly lit by Neil Austin, also deserves mention. Despite the drab greyness of the schoolroom where the first scene is set, one gets a cosy and homely feeling, almost as if to remind us that there is a bit of beauty amidst the harsh realities of the world. The scene change is coordinated extremely well; various actors come on stage to move and rearrange the props as the lights are dimmed while columns and bookcases are lowered. All this while, a silent scene is played downstage as Mary prepares to run away from the school, helped by her friends.

There is a subtlety to Hellman's script and things are brought to a poignant close in an extended scene between Karen and Martha set months later when their case has been lost and their reputation forever stained. It is at this point that Knightley and Moss are at their best, capturing the tenderness borne of a strong female friendship in the face of adversity. For all this though, I somehow didn’t feel the dénouement of the play to be as affecting. While undoubtedly tragic, it does seem too melodramatic and one does not feel that it was justified, even when reprieve finally does arrive in the form of Mrs Amelia Tilford.

Nonetheless, the play ends with a stirring image of renewal: Karen throwing open the curtain and letting bright light flood into the boarded-up room, no longer afraid to hide from the world, no longer an outsider.