The Importance of Being Earnest

It would be a perilous sin not to write a review of one of my favourite plays of all time - Oscar Wilde's immortal 1895 comedy of manners, The Importance of Being Earnest. Peter Gill's revival at the Vaudeville Theatre offered a stylish, saucy but somewhat lacklustre version of this timeless stage classic.

Having read the text several times, attended a lively school production and watched two celebrated film adaptations (Anthony Asquith's classic 1952 version with Edith Evans and Michael Redgrave and Olivia Parker's more glossy and star-studded 2002 version with Colin Firth, Rupert Everett and Judi Dench), I suppose I came in with rather high expectations and an above-average knowledge of the play. Enough definitely to spot quite early on that Penelope Keith fumbled on a line by repeating it twice and that a few bits of the dialogue had been replaced (in a bid to sound more contemporary perhaps). As a whole, Gill's production proceeds very smoothly but one would struggle to term it as memorable or fantastic by any stretch. 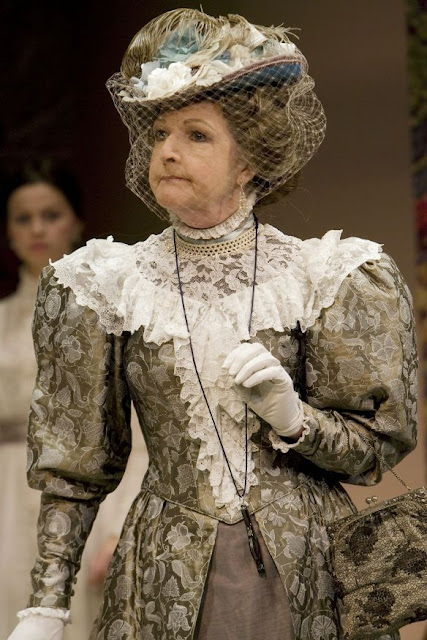 Gill's production boasts all the delights of traditional staging: elaborate costumes, amusing displays of physical comedy (the servants scuttling out in anticipation of the catfight between Gwendolyn and Cecily, self-indulgent asides and deliberate opening and closing of parasols by the girls to indicate disdain towards the men), actors freezing in stylised poses at the end of each scene and lavish curtains swooping down during the curtain call. He definitely deserves kudos for retaining the pageantry and ritual of this Victorian masterpiece and were it not for the modern clothes of the audience, one could quite easily have felt oneself transported back to Wilde's time.


The quality of the acting however could not be said to live up to expectations. Penelope Keith's Lady Bracknell proves decidedly understated in her delivery of some of the best lines in the play ("A handbag?"; "To lose one parent, Mr. Worthing, may be regarded as a misfortune. To lose both looks like carelessness!"). Most actresses playing Bracknell have placed their unique stamp on the character - be it Edith Evans's swooping cadences or Judi Dench's regal hauteur. Yet Keith can hardly be said to be in her element in "a role she was born to play", as the program rather feebly claims. She seems to strike the wrong note from the start where she is visibly outperformed by her more fiesty and ebullient daughter Gwendolyn. Nonetheless, there is a sincerity in Keith's performance that makes one realize that despite her continual emphasis on society and class, Bracknell herself had stumbled into a life of luxury through marriage and was determined to keep her place in it. 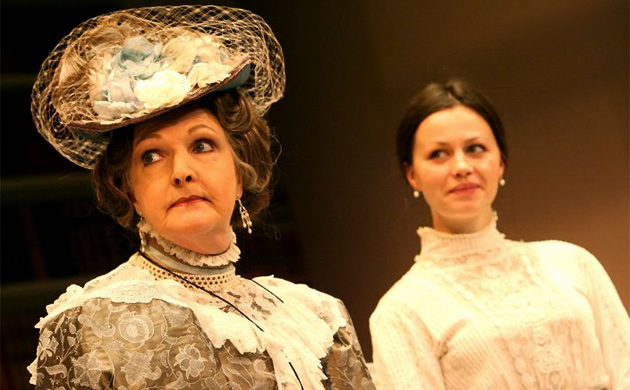 The two male leads are generally competent and trade the exquisite riposte of Wilde with a practiced elegance. Harry Hadden-Paton admirably carries Jack Worthing's transition from serious guardian to frivolous bachelor and William Ellis seems quite at one with his languorous and slightly cheeky portrayal of Algernon. The young women however, are quite another story. Daisy Haggard stands out for her uncharacteristically high-pitched, shrewish and calculated take on Gwendolyn that seems almost funny in its deadpan intensity (her steely outburst "I will wait for you all my life" is quite frightening) were it not incongruous in comparison with the more traditional characterisation adopted by the men and the governess Miss Prism (played delightfully by Janet Henfrey).

This emboldened take is also evident to a lesser exent in Rebecca Night's Cecily, the young ingénue who is not above shedding her girlish sweetness and demonstrating a fair degree of sauciness when her desires seem thwarted. Indeed, this feminist idea of the girls ultimately getting what they want no matter what is an interesting reading of the play - bringing a whole new meaning to lines like "my ideal has always been to marry a man with the name of Ernest" - but this is ultimately undermined by the fact that the mother figure of Lady Bracknell is portrayed as a rather colourless creature in comparison.

Ultimately, the real star of the play proves none other than the sparkling dialogue of Oscar Wilde, boasting repartee that is as fresh and witty as when it was first written more than a century ago. With a script that is both deliciously comic and satirical, it becomes very difficult to falter. And this perhaps is the reason why Earnest always deserves to be seen. Go there to immerse yourself in language that's so delightful, it's positively sublime.


*For a review of the all-male version of The Importance of Being Earnest by Singapore theatre company W!LD RICE, see here.
Labels: british theatre comedy play west end