Shoot the Crow revolves around the lives of four Belfast tilers, each jaded with their job and all hoping for something better, something which they feel may be temporarily achieved by stealing a load of tiles and making a tidy sum from its proceeds. Their intentions to outwit each other lead to an insight into the innermost recesses of their lives and desperate attempt to make ends meet. This unites them in a strange camaraderie that involves violence, pathos and humour.

The use of vernacular peculiar to Belfast adds to the authenticity of the play and yet achieves a heightened style that includes the fictionalised and imaginative, both of which are important to McCafferty, who feels that “I am telling a story rather than just showing a way of life.” He adds “the story is universal, regardless of language.” The intimate nature of the Trafalgar Studios’ open-concept set draws one in immediately; you cannot help but feel that you intrude upon the four actors as they bustle about, hurling obscenities and exchanging humorous repartee. 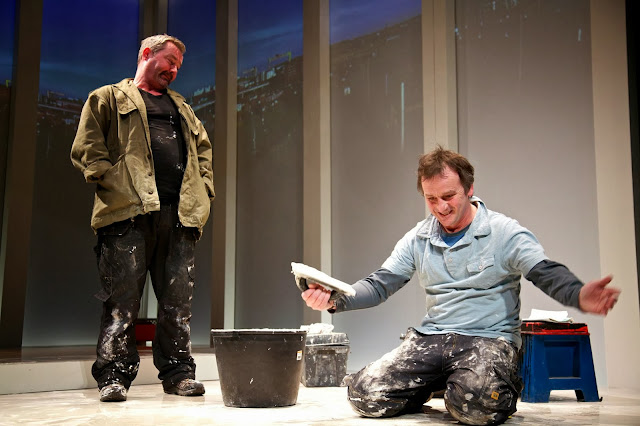 Robert Delamere opts for naturalistic directing; the central circular set of an unfinished bathroom cleverly swivels around to reveal two acting areas – the showers and the sinks - through which the characters move naturally and seamlessly, doing real construction work. The revolutions also indicate the passing of time that is crucial to understand the use of real time and stage time which is manipulated to represent the lifespan of a working man.

James Nesbitt, arguably the most well-known of the four actors and mainstay in the ITV drama Cold Feet, may not give as much philosophical weight as his character’s name Socrates suggests though he does impress with emotional scenes that evoke pathos at the pathetic lives led by the downtrodden and exploited who work for a man they will probably never meet and yet who hold their future in his hands.

Equally impressive are Conleth Hill and Jim Norton as Petesy and Ding-Ding respectively. Hill’s Petesy is domineering and glibly loud-mouthed but we sense a weakness and despair at the inevitability of his situation at work despite his tough exterior. His poignant line "you shouldn’t have to steal to get what you want", is an uncomfortable reality that has to be negotiated in a moral framework that challenges the audiences understanding of right and wrong. Norton has superb stage presence and even his simplest lines carry much weight and resonance, as the old man on his last day at work. Rounding up the cast is Packy Lee as the gauche youngster Randolph, the underdog amongst the four men and source of much comic relief, particularly in the events leading up to the hilarious climax.

McCafferty ingeniously uses humour to entertain the audience, yet does not mask the darker undertones of their monotonous existence that threatens to slip into oblivion. We are implicated in our laughter as dispassionate observers who are entering their world yet cannot completely identify with their situation. We as spectators who partake of their most intimate moments, unwittingly revealed through emotional outbursts followed by discussions on football to maintain the masculine macho "swallie drinking" work ethic that does not allow for sentimentality. McCafferty’s intent was to present the stories of people whose lives otherwise go unrepresented. This is obvious as the play seems to end where it began, except for the death of Ding Ding, an event that bears no significance in the larger scheme of things.

The wheel therefore comes full circle emphasizing the banal nature of their lives; despite all that has been said and done, nothing has really changed for them. This almost existential strain is present throughout as though actual work is accomplished by these characters a lot remains unfinished and there is the suggestion that no amount of effort will change that. The question that resonates is "What have I achieved?" and the answers evade them as their achievements are not quantifiable in terms of success as the world understands it. This is McCafferty’s brilliance in mixing the mundane with the extraordinary, which is the reality of all our lives.

*This review appeared in The Beaver, the LSE student newspaper (Issue 630).

**This review was a collaborative work between me and Arunima Kapoor (see if you can spot who wrote which bits!)
Labels: comedy irish theatre play west end