by Florian Zeller
PANGDEMONIUM
Drama Centre Theatre, Singapore
Florian Zeller's The Father was a searing examination of dementia. In The Son, he sensitively evoked the spectre of teenage depression. Pangdemonium completes the acclaimed French dramatist's family trilogy with this moving play that focuses on the emotional breakdown of a woman. Together, they form a powerful portrait of mental illness that can affect one at different stages in life.
Anne (Janice Koh) is a restless middle-aged woman who whiles away her time at home. She suspects her busy husband Pierre (Adrian Pang) of having an affair. She misses her adult son Nicholas (Jamil Schulze) who has moved out to stay with his girlfriend Emily (Mehr Dudeja).

Scenes of Pierre returning from the office or her having breakfast repeat themselves with minor variations, making us just as confused and disorientated as Anne. Is Pierre really away on a business trip? Has Nicholas moved back home? Is there more to the sultry Emily that meets the eye?
It’s a device which Zeller used to brilliant effect in his later play The Father which portrays the condition of dementia from the perspective of the patient, allowing us to experience firsthand how bewildered the main character is. Yet, unlike that play where the condition of dementia was abundantly clear, Anne’s condition is far more of an enigma.
One element of her affliction is the feeling of crushing loneliness at her children leaving the family home, the classic empty nest syndrome. Yet, it becomes obvious as the play progresses that this emptiness has wormed its way into her very soul, leaving her deeply troubled. She imagines seeing her son when he is not actually there, is desperate to spend time with him in an almost Freudian manner and even becomes convinced that her husband is cheating on her with Emily.
Director Tracie Pang, who excels at these tightly-paced family dramas, coaxes rich, naturalistic performances from her cast and allows odd moments of humour to punctuate the oppressive feeling of watching a woman slowly wither away. Koh turns in a moving performance in the titular role, one that no doubt speaks to her own lived experience as a mother and wife. She is a ball of nervous energy as she paces around, looking for something to do. In Christopher Hampton’s taut, crystalline translation, Anne's anguish is crisply expressed. “I’ve been had”, she spits at her husband more than once, resenting being stuck at home while everyone is out there living their life.
There is strong support by Adrian Pang as the good-natured husband who tries his best to understand what’s going on with his wife and Schulze as a concerned son. Dudeja also brings just the right shade of menace to Emily, making us almost convinced that Anne may be on to something about her.
Yet, for all the fine acting and direction, Zeller's play feels ultimately unconvincing. One finds it difficult to sympathize with Anne who, to all intents and purposes, appears to be a wealthy woman leading a relaxed domestic life, reading magazines and sipping wine. Zeller offers precious little insight into Anne’s back story and a teary speech at the end where she longs for her kids to be little and to feel wanted by them again doesn't do much to make her a victim. More intriguingly, one wonders why we never explore the relationship between Anne and her absent daughter; why is it that only her son’s absence bothers her so much? 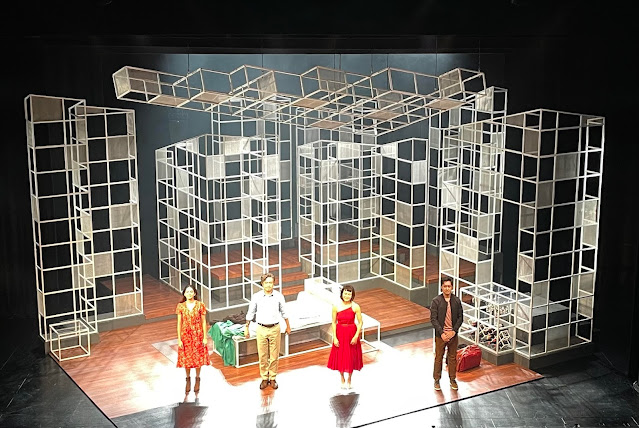 Designer and frequent collaborator Eucien Chia's richly symbolic set is a masterpiece of cuboid scaffolding that dominates the stage. The translucent panels are emblematic of the murky reality that confronts our protagonist while hinting at the the idea of her being trapped, both physically and emotionally, in a fortress from which she is unable to escape.
The monotone backdrop also forms a nice contrast to the occasional burst of colour we get from a glass of wine or bright red dress (one of many thoughtful selections by costume designer Leonard Augustine Choo) and work cohesively with Jing Ng’s sound and James Tan’s lighting. Lights flicker menacingly along the bones of the structure like electricity between scenes and at moments of tension, a nod to the frenzied mind of Anne as she struggles to make sense of her surroundings.
Coming at the end of a challenging eighteen months where so much of our daily lives have been upended due to the pandemic, The Mother is an apt reminder to check in with our own mothers and other female caregivers who may be battling their own demons. It's also a lovely return to the kind of Pangdemonium play that we have so missed over the past year: big, bold and beautifully staged.
The Crystalwords score: 3.5/5
Labels: christopher hampton drama florian zeller french theatre pangdemonium play theatre