Much Ado About Nothing


"Friendship is constant in all other things
Save in the office and affairs of love:
Therefore all hearts in love use their own tongues;
Let every eye negotiate for itself
And trust no agent."


Shakespeare's Much Ado About Nothing has been described as the "Renaissance version of Friends" and this most breezy of the comedies proves the perfect antidote for the rather lacklustre British summer. Josie Rourke's stylish production at the Wyndham's boasts two of British television's most popular stars - David Tennant of Doctor Who fame and Catherine Tate of her eponymous comedy sketch show - and reinvents this timeless classic with panache.

Rourke relocates the action of the play from sixteenth century Messina to 1980s Gibraltar, conjuring up a heady world of crisp white uniforms, booze, smoking and dancing. Tennant's Benedick bursts onto the stage driving a golf buggy festooned with flags to the sound of loud cheers from the men while Tate's Beatrice, dispassionate about the world of romance, slouches about in denim overalls and dark sunglasses, swigging a beer. 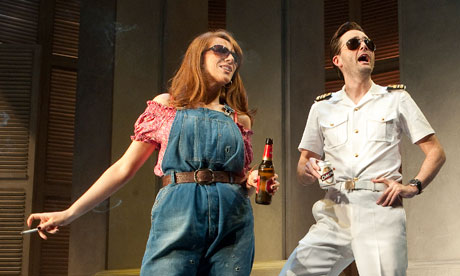 Robert Jones's white circular set incorporates perfect period details and manages to captivate without detracting anything from the exuberant performances. The props evoke the brash disco-feel of the era - oversized radios, boom boxes and electronic keyboards (which Tennant has a lot of fun with). This is complemented by amazing costume designs that capture the heart of the groovy Eighties: even Hero's wedding dress is a nod to Lady Diana's famous puff-sleeved, long-trained gown.

Tennant has indeed matured as an actor in the three years since his acclaimed Hamlet for the RSC and brings a cheeky and dapper charm to Benedick as a man for whom the pursuit of love is almost as appealing as the actual prize. Tate, last seen on the London stage as an overlooked housewife in Alan Ayckbourn's Season's Greetings, lends a frumpy tetchiness to Beatrice whose caustic barbs are just part of the emotional architecture she constructs around herself to avoid the vulnerabilities of love.

Part of the charm of this Benedick and Beatrice is that they emerge as genuine sexual equals whose verbal sparring is the very heart and soul of the play. There is a witty sexual dialectic between them till the end; at the scene of Hero's denunciation at the altar, Beatrice's chilling retort "Kill Claudio" to Benedick's romantic entreaties is both an order and a challenge. It comes as no surprise that in the masked ball scene, Tennant is in garish disco drag while the tomboyish Tate lounges in a black suit, cleverly inverting the traditional notions of gender. 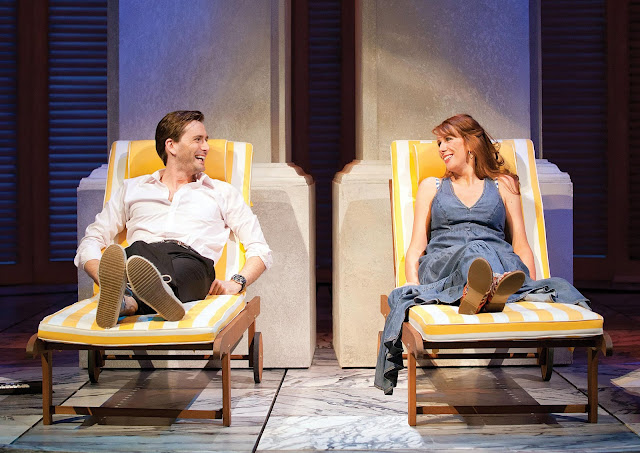 Rourke's production also showcases the matchless comic skills of Tate and Tennant, whose slapstick antics bring out the comic potential of the play to its full extent. A particular crowd-pleaser are the two complementary scenes where Beatrice and Benedick overhear concocted stories about how the other is in love with them in a plan by their friends to matchmake them. Tennant's Benedick prances about in a tight Superman T-shirt, getting increasingly jittery and paint-splattered behind pillars as he digests the news while Tate's Beatrice ends up suspended in the air, flapping about ineffectually like a large fish. Tennant's bemused "Why?" at the end of the scene is only matched by Tate's incredulous "What?" after an incredibly long and pregnant pause, bringing the house down.

One of the dangers of a play of this sort is the risk of running out of steam and Rourke manages this well. After an incredibly strong first half complete with images of steamy hen and stag parties, the second half maintains the same vigour. The initial marriage scene between Claudio and Hero is is beautifully staged and the aspersions cast on Hero's character and subsequent tensions fuelled by the malicious Don John temper the emotional barometer, setting a darker tone to the play that acts a good counterpoint to the frivolity at the start.

Music is also integrated very well into the scenes. In a poignant sequence, a heartbroken and desolate Claudio (a commendable debut performance by Tom Bateman) mourns Hero's apparent death by drinking heavily while listening to the radio. The song then spreads out to engulf the whole theatre, as he briefly contemplates suicide, before being contained once again in the radio as reality reasserts itself.

There are fine performances from the ensemble cast. Adam James's Don Pedro strikes the right note of avuncular jocularity, Tom Bateman and Sarah Macrae's Claudio and Hero are both amusing and tender as the perfect couple blown apart by a misunderstanding and John Ramm's superb constable Dogberry has the audience eating out of his hands with his swarthy, Rambo-esque bravado and comic malapropisms.

Indeed, by eschewing the milieu of courtly love and evoking a world that seems both familiar and fantastical, Rourke's Much Ado brings us along one romantic journey to which we will be drawn to over and over again.