The Scottish play is back. Though perhaps there is no need for all the theatre superstitions this time round, since it is being staged outdoors at the Fort Canning Park. With seductive posters lining the roads, swanky corporate sponsors and a director specially flown in from the UK, this latest edition of SRT's bi-annual Shakespeare in the Park looks set to be a night to remember. And indeed, this slick, thriller-like production of Macbeth certainly delivers its promised "mystery, madness, suspense and suspicion". Whether it manages to be a sensational or definitive rendering of this, one of the Bard's most well-known tragedies, is rather a different question.

As one enters the cordoned-off section of Fort Canning Park to spread out one's picnic mat, Morgan Large's set immediately captivates. The two-tiered structure is austere, white and fortress-like with a black glossy stage. There is also a long thrust stage that snakes its way well into the heart of the audience, making for many dramatic entrances and exits. The lighting design by Andy Lim complements this well, the stage alternating from black-and-white starkness to shimmering hues of blue and red. 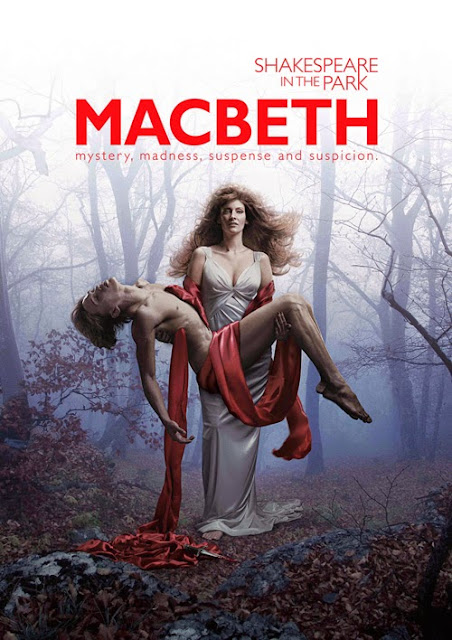 Local theatre veteran Adrian Pang displays a competent range of verse-speaking as Macbeth and is particularly good in scenes of madness or misery, such the beautifully observed banquet scene where the ghost of Banquo (William Landsman) takes his seat at the table, literally and metaphorically asserting his rightful place. Upon hearing of his wife's death, Pang gives a little shrug and delivers the "To-morrow, and to-morrow, and to-morrow" speech with a resigned nonchalance, the light converging on the spectre of this man whose life is as a "tale/Told by an idiot, full of sound and fury/Signifying nothing."

However, one is left feeling that Pang has not really developed a conception of his Macbeth, be it an ordinary man forced onto a terrible path due to one fatal mistake or a ruthless, tyrannical dictator as portrayed by Patrick Stewart in Rupert Goold's celebrated Chichester Festival Theatre production in 2007. Pang's Macbeth has occasional bouts of scene-stealing lucidity but there is a nebulousness about who exactly this man is and how he has become the way he is. It is perhaps this lack of a specific vision that makes the production as a whole just competent rather than truly spectacular.

Director Nikolai Foster's Macbeth is clearly informed by British theatre heavyweights such as Rupert Goold and Trevor Nunn, particularly in the use of powerful visuals on the stage such as light and colour. In a chilling sequence,  Macbeth shoots Macduff's son, shocking us with the loudness of the unexpected gunshot, and then mimes shooting Lady Macduff before walking up the thrust stage with a look of manic contentment at having quashed his rival.

There are however some elements of the production that could be played up. In the famous "Is this a dagger" soliloquy, Pang's Macbeth produces a very real dagger which he jabs in front of him and occasionally brandishes. This motif of the dagger always being in his hand as he blazes a trail of bloodshed could have been sustained throughout the play. Another aspect that was missing was a clear sense of location. One wonders if the historical associations of Fort Canning Park could be made better use of - Macbeth as a WW2-era Japanese dictator in Singapore perhaps? Universality is always a good thing but it would have added a nice angle if the production was rooted in particular context.

Amongst the supporting cast, there are fine performances by William Ledbetter as Duncan and William Landsman as Banquo. A particularly unfortunate piece of casting is Patricia Toh as Lady Macbeth. Macbeth as a tragedy is buttressed by the emotional and sexual chemistry between the husband and wife pair and this was something which was sorely lacking in this production. Toh's very Singaporean accent also proves jarring and at times her intonation is plainly off the page, descending into screechy melodrama. I could not help but wistfully recall Judi Dench's matchless Lady Macbeth in Trevor Nunn's stage and screen production.

The Weird Sisters are brilliantly conceived as Victorian gothic creatures with white dresses and white faces who potter around with a manic air; they deliver the three prophecies on the upper level of the set, white phantasms suspended on a black backdrop. They are also cleverly employed at the very end where Malcolm is crowned king, repeating their chant of "When shall we three meet again" while truncated recordings of political leaders are played. It is upon this haunting final image that the lights dim, giving the play a timelessness as we realize the cycle of destruction and violence is always there waiting to happen, at another time and another place.

*This review appears as a guest review for The Flying Inkpot.