With a trailblazing West End season in 2008/2009 featuring Kenneth Branagh, Judi Dench and Jude Law, the Donmar Warehouse is certainly no stranger to the London theatre scene. Having already seen Michael Grandage's lush, evocative Twelfth Night with Derek Jacobi as Malvolio, I was thrilled to learn that the two of them would be reuniting to tackle King Lear at the original Covent Garden venue. The appeal of this production was obvious and not just to me: indeed, tickets had been sold out a good six months in advance.

Critical opinion may be divided as to whether Lear is Shakespeare's greatest play but one may argue that it is nonetheless one of his most epic. It stands in a whirlpool of transcendent forces encompassing the whole spectrum of humanity: king and beggar, youth and age, sight and blindness, madness and reason, cruelty and compassion, good and evil. Conscious of these manifold contrasts, Grandage's production does not quibble with the minutiae of sets, costumes or props; what greets our eyes from the very start is Christopher Oram's spartan stage of whitewashed wood and the actors all clad in black. The point is clear - this is a Lear that is resolutely focused on the acting and the stark, sharp contrast accentuates our focus on the richness of the language and the weightiness of the themes. Never have I seen a visual tableau that conveyed so much by doing so little.


Derek Jacobi's Lear is full of classic hubris at the start as he yearns florid displays of affection from his daughters. Goneril (Gina McKee) and Regan (Justine Mitchell) gladly indulge in this "glib and oily art" to ingratiate themselves in their father's eyes but Cordelia (Pippa Bennett-Warner) stands her ground, declaring that she loves her father "According to [her] bond; nor more nor less". Cordelia is banished, the good Kent who intervenes on her behalf is exiled and the enraged king sweeps off after giving everything to his two elder daughters who already begin to reveal their evil streak as the scene ends. From the start then, it is evident that this is a very classic, traditional staging of Lear where the words and actions speak purely for themselves. 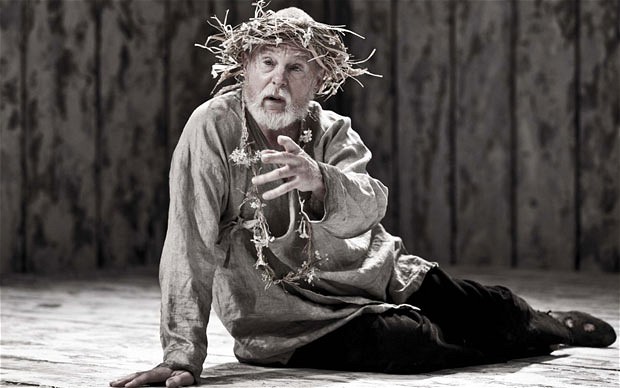 I had the pleasure of seeing Derek Jacobi on stage for the first time two years ago in Grandage's Twelfth Night. His Malvolio was a true comic gem; a haughty and officious steward who faces abject humiliation when led to believe his mistress is in love with him. Yet a minor character with a few amusing lines is very different from one of the most challenging roles in Western literature, one which classical actors spend their entire careers aspiring to. And though I had absolutely no doubt of Jacobi's prowess for verse-speaking, I could only behold in wonder as he delivered Shakespeare's immortal lines in one of the most perfect stage voices I have ever heard. His Lear is the force behind this excellent production and it made me alive, perhaps more than ever before, to the many great speeches in the play. In a poignant moment, Jacobi's Lear is momentarily stunned by the extent of his daughters' ingratitude as they ask him why he needs any followers at all before replying:

"O, reason not the need: our basest beggars
Are in the poorest thing superfluous:
Allow not nature more than nature needs,
Man's life's as cheap as beast's"

One of the most interesting perspectives this production brings is in the storm scene, where the enraged and dispossessed Lear leaves his ungrateful daughters to brave the elements. Most Lears scream and shout at the injustice of it all, yet Grandage powerfully brings home the idea of the storm within and the storm without. Flashing lights and deafening noise brilliantly conjured up by Neil Austin and Adam Cork's effects are juxtaposed with the spectre of Jacobi's Lear, standing perfectly still and whispering at the elements to blow, crack and destroy the earth. I had never contemplated a Lear whispering in the storm scene in the face of such powerful and violent language but yet, as this scene reminds us - the real storm is in Lear's mind as he is racked with emotions far more extreme than the raging tempest.

The subplot concerning the Earl of Gloucester and his two sons is also enacted beautifully. Alec Newman's Edmund makes an arresting start in his "Thou, Nature, art my goddess" soliloquy and is charismatic, forceful and utterly malevolent as he goes about his dastardly plan to accuse his loyal brother Edgar (Gwilym Lee) of treachery and pave his way to his father's fortune. The blinding of Gloucester, one of the most terrifying scenes in the play, is also given a visceral slant: the Duke of Cornwall throws the "vile jelly" across the stage with vehemence after tearing out Gloucester's eyes. The image of the helpless, bloody Gloucester in the middle of a barren stage drives home the depths of human iniquity. Paul Jesson invests his Gloucester with a tremendous pathos and I found the scene where the blinded Gloucester stands before the disguised Edgar one of the most intensely moving:

"I have no way, and therefore want no eyes;
I stumbled when I saw...
…O dear son Edgar,
The food of thy abused father's wrath!
Might I but live to see thee in my touch,
I'd say I had eyes again!"

The other scene which tugged at my heartstrings was where the mad Lear, fantastically dressed in wild flowers, encounters the blind Gloucester in the wilderness. After a fiery diatribe, the two old men lie down on the floor almost because there is nothing left to say, staring at the sky for a few moments in silence until Lear remarks quietly "If thou wilt weep my fortunes, take my eyes/I know thee well enough; thy name is Gloucester". It is this small moment of solidarity that reminds us of the common thread running through the fates of these two old men; both are subjected to great adversity on "this great stage of fools" and both are only able to learn the true meaning of human compassion by becoming mad and blind respectively.


There is also excellent support from Ron Cook as the trusty Fool who disappears after the storm scene. As the heartbroken Lear enters at the end with the lifeless body of Cordelia and utters "And my poor Fool is hang'd", we are powerfully reminded of that other Fool who never left his side. It is open to speculation whether Cordelia and the Fool are one and the same person (since the two interestingly never appear on stage at the same time) but whatever the case, we are at least comforted by the fact that there was someone who loved Lear by his side throughout his ordeal.

It is not easy to sum up a play that appears so simple and unadorned at first blush that there is hardly anything to remark about. Yet, it was precisely this simplicity that I ultimately took away with me for I saw the play in all its profound, affecting light. Grandage has given us a Lear that is heartfelt and intensely moving. An elemental triumph.