"If music be the food of love, play on,
Give me excess of it; that surfeiting,
The appetite may sicken, and so die."

Following an acclaimed debut with Ivanov, this second production in the Donmar West End season is a veritable burst of colour in the winter and a lovely way to celebrate this festive season. Watching Michael Grandage's Twelfth Night, on the twelfth night of December no less, is truly a delightful experience, Shakespeare's comedy of love and mistaken identity being elegantly brought to life in a Mediterreanean-inspired staging with outstanding ensemble performances and intoxicating music.

This is a smooth, seductive Twelfth Night, where Duke Orsino (Mark Bonnar) is the very paragon of masculine desire - standing in an open white robe declaring his love for Olivia and partaking in morning dance rituals with his entourage of men. The ethereal Indira Varma, resplendent in a trailing black gown, endows the grieving heiress Olivia with a regal hauteur, steadfastly refusing the romantic entreaties of Orsino. Yet she soon succumbs - to his eloquent messenger Cesario, a disguised young girl by the name of Viola who in turn, finds herself in love with Orsino. Thus the rich tapestry of love and disguise unfolds, bathed in the amber glow of Christopher Oram's set.

Grandage's fine ear for comedy that was showcased so brilliantly in Ivanov has no shortage of outlets in this production, which thrives on such memorable scenes as the laugh-out-loud banter between Olivia's permanently inebriated kinsman Sir Toby Belch (Roon Cook) and the hapless antics of his dim-witted sidekick Sir Andrew Aguecheek (Guy Henry). Grandage also inserts other interesting and cheeky touches. The dapper Sebastian (Alex Waldmann) is seen sunbathing in a 1920s-style bathing suit and later, sneaking out of Olivia's bedchamber for a post-coital cigarette. More significantly, Orsino's latent sexual confusion is hinted at when he wavers, just for a moment, between Viola (disguised as Cesario) and Sebastian when their real identities are revealed. Yet the real highlight of this delightful production is the comic subplot about the taciturn steward Malvolio (Derek Jacobi) being duped by Sir Tony and the others into making amorous overtures to his mistress, Olivia.

So what then of Derek Jacobi, whose face has been featured so prominently on the publicity posters and who is undoubtedly the main attraction of this play? Was he eclipsed by the smouldering young lovers? Think again. In Jacobi's hands, Malvolio emerges as one of Shakespeare's finest comic gems. When someone has the capacity to send the entire audience into laughter with his very first line, or rather, word (a long-drawn out "Yes" in response to a question from Olivia), you know you're in for a good time. Jacobi's stiff formality and overbearing arrogance makes his character perfectly placed for a most amusing prank - being led to believe via a disguised letter that Olivia is in love with him. Enter the lovestruck Malvolio, cross-gartered with yellow stockings, making ribald remarks about Olivia's penmanship (yes, about her "C's, her U's, and her T's") and trying to contort his austere features into a smile. For a man with as illustrious a stage history as Jacobi to offer himself up for mere comic relief and do it so splendidly that he outshines everyone else in the process is truly the mark of an amazing actor who very deservedly brings the house down. 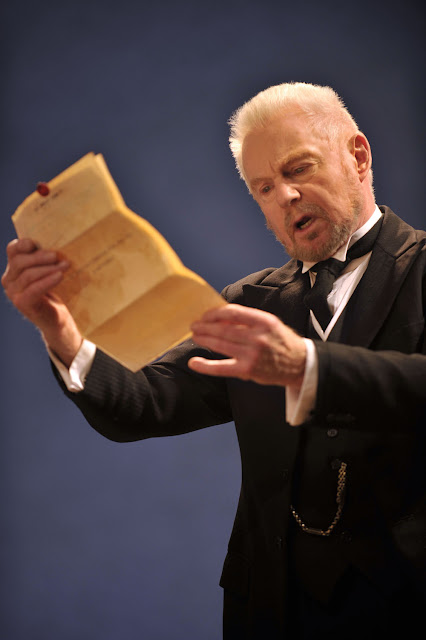 Grandage's Twelfth Night is a lush, evocative production that appeals to all the senses, brought to life by Neil Austin's soft lighting, Julian Philips's haunting music and Ben Wright's snazzy choreography. The Donmar Warehouse has delivered a superb production once again and while the acting may occasionally be patchy, this is a play where the whole emerges very much more than the sum of its parts. Zubin Varla's Feste, in a bright patchwork cloak and toting an acoustic guitar, brings a haunting soulfulness to the play with his many songs and adds to the cheerful and ultimately uplifting tone in this celebration of both love and life.