The beauty of Pinter's 1978 masterpiece is the fact that it takes the most common of scenarios - a love affair between three friends - and plays it backwards in time. With the searing intensity of a novel like Martin Amis' Time's Arrow which deconstructs the very nature of life itself by playing it backwards and yet that characteristic simplicity born of Pinter's works, it makes for an engaging piece of theatre from beginning to end, or rather, from end to beginning. 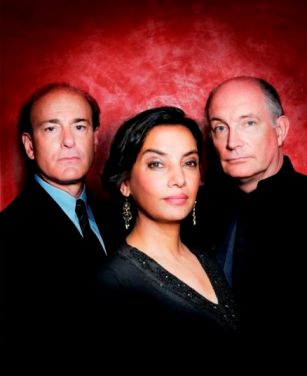 Betrayal traces a love affair between a woman (Emma) and two men: her husband (Robert) and his best friend (Jerry) over a period of nine years. Starting in the present, the two ex-lovers, Jerry and Emma, exchange awkward greetings in a pub after not having seen each other for two years. Emma reveals to Jerry that her marriage with Robert has reached an irreconciliable end and confesses, much to Jerry's discomfiture, that her husband knows all about their affair. In fact, he has known for four years. Who really is the one betrayed?

In a series of deft and poignant scenes, Pinter goes back in time to reveal how exactly the couple reached this sorry state. In the very last scene of the play that takes place nine years previously, it is revealed how their affair began at a party in Emma's house where, with the brashness of a young lover, Jerry makes a declaration of his feelings for Emma when they fortuitously spend a few moments of solace in her bedroom. As they hold hands and stare at each other with smouldering passion while the lights slowly dim, the pathos of the scene so effectively evokes those twin feelings of pity and horror and makes us truly applaud Pinter's skill as a playwright. Like a stripped flower whose petals are slowly returned, their lives seem full of beauty but we cannot forget the ugliness it withholds.

The Singapore Repertory Theatre has done a commendable job with Betrayal; the simplicity of Pinter's words are not jarred by unnecessarily complex sets or costumes. Indeed, the scenes themselves take place in confined spaces with minimal props which cleverly increases the physical intensity of the dialogue. The three actors, all accomplished thespians with decades of experience, work superbly with each other and deliver a compelling portrait of the lies and deceit in our everyday lives. It is difficult for any actor to age over the course of a play, considerably more so to grow younger and shed off layers of guilt to become more innocent and carefree. In this respect, Shabana Azmi is perhaps most convincing; believably portraying the youthful exuberance of a young married woman despite her 55 years.

Peter Friedman and Simon Jones, both veterans of the English stage, banter with easy familiarity and despite their years, convey an energy that engages the audience scene after scene. The directing is elegant and the actors take their time to enter and leave each scene after the lights fade, seemingly uninterrupted in their feelings and emotions. The scene-changes, done by two or three stage hands, though smooth and well-executed, prove perhaps a little jarring and could have been done in complete as opposed to partial darkness.

Betrayal is ultimately an elegant, elegiac piece of theatre that strips humanity to its true essence. A gem that sparkles with the beauty of simplicity.
Labels: british theatre drama play singapore repertory theatre