by Robert Yeo
The Second Breakfast Theatre Company
Stamford Arts Centre, Singapore
This is an ambitious project. Young theatre outfit The Second Breakfast Theatre Company has taken taken all three plays from Robert Yeo's classic trilogy (Are You There, Singapore? (1974), One Year Back Home (1980) and Changi (1997)) and condensed them into a brand-new adaptation, together with deleted scenes, new text and a revised ending in consultation with the playwright. Seen together for the first time, we get a strident portrait of nationhood, identity and friendship.
The Singapore Trilogy chronicles the friendship between three characters over several years who meet as students in London and return home to Singapore where they find themselves at opposite ends of the political spectrum: charismatic Reg (Shrey Bhargava), straight-laced Chye (Casidhe Ng), and Chye’s headstrong younger sister Hwa (Ong Yi Xuan). 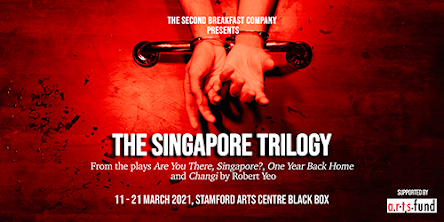 Yeo’s original plays may have been groundbreaking for its frank and forthright discussion of political issues but they are undeniably a test on one's endurance, with ponderous dialogue and tedious exposition. Director Adeeb Fazah and dramaturg Dominic Nah have done their best with the material, removing side characters and tightening the plot to focus principally on the three main characters.
This trimmed-down version of the text flows reasonably well and remains true to the original. The best artistic choice has been to break up the chronology so we start with scenes from the final play Changi where Reg is being detained by the police under the Internal Security Act. We then segue into flashbacks of his university days and relationship with the other characters over the years. This non-linear approach gives a fresh spin to the play by us flitting between past and present and increasing the dramatic stakes.
There is generally decent chemistry between the three leads. The standout performance is Shrey Bhargava as political rebel Reg. He commands the stage and immediately draws us in with his presence. He is particularly impressive in a scene where he addresses a crowd, protesting against construction with would impact the denizens of Bugis Street.
Casidhe Ng is competent if slightly forgettable as the straight-laced Chye who becomes a PAP politician. Ong shows a little more spunk as Hwa, a young woman who is certainly modern by Singaporean standards in having an affair with an Italian man and keeping the child when she finds herself pregnant. The same however could not be said of the decidedly uneven supporting cast whose scenes give the production a painfully amateur feel.
The production front leaves a lot to be desired. Despite the edits, there are far too many scene transitions which slow down the pace. Jarring directorial flourishes like having the actors freeze in stylized postures during the interrogation scenes detract from an otherwise naturalistic approach taken to the storytelling.
The same set is used throughout the play for a variety of settings and this again proves confusing for the audience. The plays span over a decade from the late 1960s to the 1970s and yet we barely get a sense of the passage of time. One moment we see a pregnant Hwa and literally in the next scene, a young child is on her lap. The team could have done a better job of signposting this and making the characters age.
Overall, this is an earnest and largely faithful adaptation that has taken the best parts of the original text and sought to provide some contemporary resonance for a new generation. It's not nearly as exciting as some of the company's fresher work like The Hawker but one must acknowledge the effort and ambition in seeing this through.
I discuss this production in more detail in the Arts Equator theatre podcast, together with playwright, poet and editor Nabilah Said and theatre educator Matthew Lyon.
The Crystalwords score: 2.5/5
Labels: arts equator drama play podcast second breakfast singaporean theatre theatre