Jo Tan's debut full-length play Forked explored the journey of a Singaporean woman who finds herself torn between who she is and who she wants to be, burying herself under a phony foreign persona before discovering her authentic voice. Tan continues her interrogation of identity politics and self-expression in King, a monodrama presented as part of the Festival of Women N.O.W. by T:>Works and directed by Jasmine Ng.

The action revolves around Geok Yen, a mousy public relations executive who is in a stable relationship with her boyfriend Matthew. When she decides to attend an office party one night wearing Matthew's clothes, she unwittingly creates a gregarious drag king persona: Stirling da Silva. Suddenly, in this alter ego, Geok Yen finds herself gaining a confidence and power she never had. This opens up a new world of possibility and secrets which eventually spirals out of control.

Throughout the play, we explore the idea of gender as a construct and the ways in which we 'perform' our gender every day. The drag world which Geok Yen stumbles into quite literally involves her taking on a different gender identity. As the debonair Stirling, she no longer feels circumscribed by traditional notions of womanhood which include having to forgo career advancement for domestic duties. Matthew's best friend, Chong Jin, uses toxic masculinity as a mask to hide his own sexual confusion. Others, like Geok Yen's sassy boss Jezebel, weaponise their sexuality in a bid to command respect at the workplace. 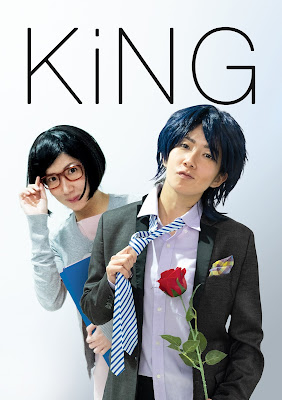 As Geok Yen soon learns, privilege cuts both ways. When she joins a drag club where her gay Australian colleague Ethan performs, she finds it hard to connect with the other drag queens. The world of drag is an outlet for them, a means to claim their own space and freely express themselves. It's not just a weekend hobby. Suddenly, as a cisgender woman who can snap back to her regular life and get married, she is the one with the privilege.

King was originally set to be performed live but due to the digitalization of the festival, was reinvented as a filmed performance. Director Jasmine Ng makes the most of the format to deliver a crisp, engaging experience for the online audience. She uses three cameras to tell the story. The character of Geok Yen is played dead centre and at eye level, creating the intimacy of a confessional, while the other characters are played at left and right angles to establish a change in visual tone. The lighting and sound design work well in crafting various settings ranging from the hum of an office to the glitz of a drag club.

Tan delivers an honest and nuanced performance, making an attempt to define each of the characters in the play through changes in body language and simple props such as a pair of sunglasses or a scarf. As Geok Yen, her facial tics and constant ‘hmm’s convey the nervous energy of a person constantly doubting herself. This is nicely contrasted with the straight-laced Matthew, flirtatious Jezebel and sassy club proprietor Mama Lemon. However, some elements of the plot could be tightened. A colleague who sits around smoking feels redundant. The storyline of Ethan, who becomes something of a confidant to Geok Yen and is revealed to have his own relationship woes, also feels unresolved.

King is a sharply observed  exploration of gender that is sensitively brought to life by a strong performance. Even in this filmed iteration, the script shows tremendous potential and marks Tan out as a playwright to watch. One hopes she has the opportunity to give this a full staging one day.
I discuss this production in more detail in the Arts Equator theatre podcast, together with playwright, poet and editor Nabilah Said and theatre educator Matthew Lyon.