It’s quite impossible to bid the year goodbye without WILD RICE’s traditional holiday pantomime, a veritable institution on the Singapore theatre calendar. Over the past 15 years, the company has developed a niche in blending this uniquely British tradition with colourful local characters and themes, creating an occasion that can be celebrated by audiences of all ages. This year, WILD RICE brings us Peter Pan in Serangoon Gardens, a captivating local retelling of the much-loved tale by J. M. Barrie, written by acclaimed Singapore playwright Thomas Lim.

In this version, teenaged Wendy (Mae Elliessa) and her two younger brothers are alone at their Serangoon Gardens home when Peter Pan (Pam Oei), the boy who never grew up, and plus-sized fairy Ting Tong Bell (Andrew Marko) burst through their bedroom window. After some persuasion, Wendy agrees to accompany Peter to Neverland with her brothers in tow, where they meet his gang of Lost Boys and are embroiled in an action-packed adventure with Peter’s nemesis Captain Hook (Siti Khalijah) and his cronies, Simi and Taichi (Dwayne Lau and Benjamin Chow). 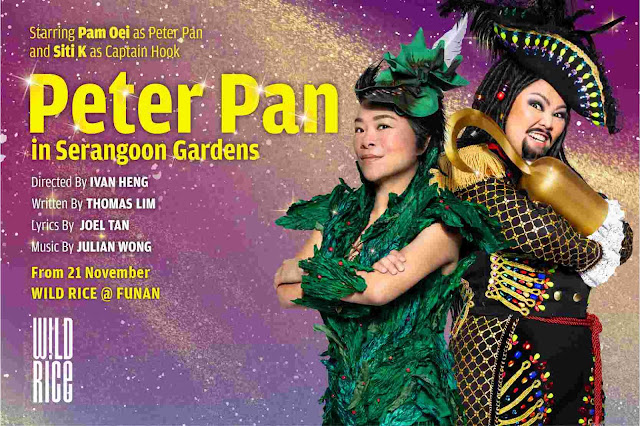 Peter Pan in Serangoon Gardens is the first pantomime to be staged in the company’s new space, the 358-seat Ngee Ann Kongsi Theatre, and part of the joy of the entire experience is its omnivorous, three-dimensional staging. Indeed, it is perhaps with this production that one is able to truly appreciate the full dramatic potential of this new venue.

Musicians are scattered on three levels for a surround sound effect, actors make full use of the thrust stage to engage in direct address with the audience and scenes and effects play out all over the theatre with the ensemble running into the balcony. Coupled with the overall intimacy of the space, where every audience member is seated not more than 12 metres from the actors, it combines to create a rich, immersive experience that has one enchanted.

Alive to the importance of creating that crucial element of magic in the theatre, director Ivan Heng takes his production to giddy heights, quite literally. Actors cruise through the air, suspended by a meticulous system of harnesses operated by trained stagehands. Everything is kept within full view but it’s easy to suspend one’s disbelief and be swept away seeing Peter and the kids ascending and descending over the stage, conveying the sheer ecstasy of flight.

The primary cast of six, many of whom are familiar faces on the local stage, deliver strong and energetic performances. Eliessa, fresh off an impressive turn as street urchin Little Sally in Pangdemonium’s recent production of Urinetown, anchors things as the precocious and pragmatic Wendy, a girl filled with child-like wonder and the weight of reality. It is she who counters Oei’s pixie-like, world-weary Peter and declares that “growing up could be an awfully great adventure”, ready to embrace whatever life has in store for her. She also has a wonderful singing voice that comes into its own in solo ‘That Wendy’ and bittersweet duet with Peter, ‘Goodbye’.

Andrew Marko’s Ting Tong Bell, the sassy, pig-Latin spouting fairy, has one in stitches as he fixes Wendy with a withering gaze and calls her “itchbay”, something that one hopes would be lost on the younger members of the audience. There is also commendable work by Siti as the dastardly villain (again) and Chow as both a buffoonish pirate and flirty mermaid.

Of course, the beating heart of any WILD RICE pantomime is the FIRST STAGE kids, a group Heng cheekily refers to in the curtain call as the company’s own version of “succession planning”. The 33 kids (rotating over each performance) animate almost every scene they are in and are offered many moments to shine, the two actors playing Wendy’s brothers in particular holding themselves up admirably against the adult performers.

Lim, best known for his nuanced social dramas Grandmother Tongue and Supervision, delivers a generally faithful version of the original tale with amusing local touches and modern updates. Lim draws a nice contrast between the quotidian routines of Singaporean childhood (waking up at 6am! assessment books! cod liver oil emulsions!) and the chaos of the Lost Boys who seem to truly embrace the zaniness of their life. Running through the story is a reminder that children here have somehow lost that sheer passion for adventure as they hurtle from one milestone to another to achieve success.

Yet, where Peter Pan in Serangoon Gardens lacks a bit of gusto is in delivering that irreverent undertow of satire to accompany all the good cheer. There are the odd references in the text to politicians and boringly obedient Singaporeans but I rather miss the naughtiness we saw in earlier editions that pushed things just a little bit further. Overall, the whole affair feels too tame and attempts at satire barely graze the surface.

On the music front, composer Julian Chan and lyricist Joel Tan deliver one of the most accomplished scores I’ve seen in a WILD RICE pantomime to date, from the beautifully haunting central refrain in ‘Time for a Story’ to songs like the jaunty ‘Revenge is a Dish Best Served Shiok’ or sweetly romantic ‘Keep it Chill’.

The production elements also help the tale to soar. Set designer John C. Dinning transforms the stage with painstakingly hand-painted floors and richly detailed sets, ranging from a hideout inspired by a mangrove swap to the bustling deck of a ship. Lisa Keegan animates the action with sinuous choreography. The duo behind Tube Gallery, whose creations have graced previous pantomimes such as Mama White Snake and A $ingapore Carol, dazzle us with a parade of gorgeous, detailed costumes. And Brian Gothong Tan’s multimedia works to great effect in complementing the action, creating fish that dart around a lagoon or the sense of drifting through the clouds.

Peter Pan in Serangoon Gardens is a wholesome family treat that proves a perfect way to embrace the festive season and a harbinger of great adventures awaiting us in this exciting new space. If you have yet to experience a WILD RICE pantomime, it’s well worth taking this flight to Neverland. Case in point: I dragged my Merdeka Generation dad along for his virgin pantomime experience and he was eagerly leaning forward, tapping his fingers on his chair and beaming at the cute kids running around on stage.

“Do you believe in fairies?”, we are asked more than once.

I think we all know the answer to that.