Thomas Lim's debut play Grandmother Tongue used the tale of a young man connecting with his dialect-speaking grandmother to highlight themes of ageing and cultural alienation felt by members of the community who have quietly slipped through the cracks.

In this sophomore outing as part of the Singapore Theatre Festival, he displays once again the ability to create gripping drama out of the everyday with a nuanced examination of surveillance, caregiving and old age in our city state. 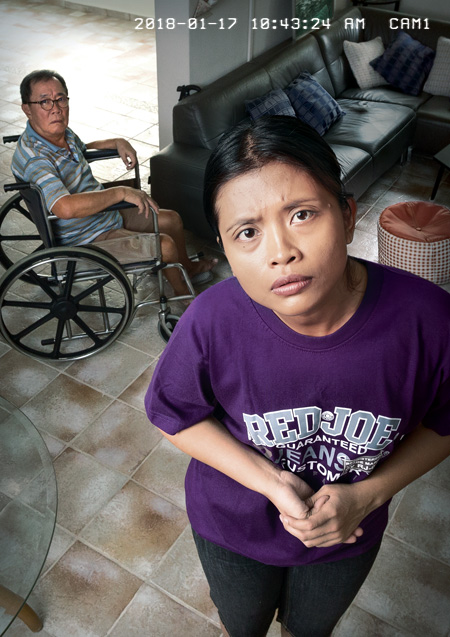 The story is a simple one. Yanti (Umi Kalthum Ismail) is a newly arrived Indonesian helper who has been hired by Jenny (Janice Koh) to care for the latter's invalid, wheelchair-bound father, Kian Keong (Patrick Teoh). We follow Yanti as she goes about her duties, torn between fear of her suspicious, intimidating employer and devotion towards her elderly ward with his craving for fatty foods and clandestine cigarettes.

Yanti learns to quietly accepts the status quo, knowing that she needs the job to get money to send to her family back home. However, when she discovers a series of cameras installed all over the house - even in the toilet and her bedroom - she is unable to take things lying down. Should her employer have autonomy over every aspect of her life? Similarly, should Kian Keong be allowed the dignity to keep certain parts of his life private and away from his daughter's suffocating solicitude?

Lim's lived-in and authentic dialogue conjures up three fully-realized characters from different age groups, each with their unique speech patterns. Remarks about employers not being able to trust their maids because of the pervasive "network" of acquaintances  they have and patronising, casually racist observations bear a strong stamp of authenticity because they reflect exactly what many Singaporeans feel about domestic workers.


Veteran theatre maker Glen Goei keeps things tightly paced, leavening the tension with delicate slices of humour. Wong Chee Wai's economical set comprises a circular stage with a dining table and four peripheral spaces - Yanti and Kian Keong's bedrooms, the kitchen and the toilet - which are shaped out of translucent walls, allowing us to peep inside and see exactly what goes on inside, be it Yanti tearfully catching up with her children on the phone, Kian Keong struggling in the toilet or Jenny rifling though the kitchen cabinets. We are immediately implicated into the action because, like Jenny, we are the voyeur spying on these characters.

The theatre-in-the-round setting also augments the theme of surveillance that the play drives home. We find ourselves watching other audience members even as we see cameras trained on the actors and their every action displayed on screens located on each side of the stage. It's a masterful fusion of text, design and direction.

Umi delivers a standout performance as Yanti - a nervous, shrunken creature who scurries around, trying to draw as little attention to herself as possible. From the outset, she has us rapt as she tries to make sense of this foreign land and forges an unlikely friendship with an older man who is as much of a prisoner as she is. Teoh is likewise captivating as the prickly Kian Keong who keeps disagreeing with his daughter's choices. We may empathise with Yanti as the victim but Kian Keong is just as much a character to be pitied, a man who is unable to take care of himself yet denied of creature comforts that give him a sense of identity.


Although Koh does a superb job as Jenny, one feels her character lacks development. She is portrayed as a cardboard villain from the outset, ordering Yanti to empty her belongings and suspecting her every move. It's only towards the end that we see her frustration at the absent sibling who lives abroad and desire to make her father's final days as peaceful as possible by taking him out of a nursing home and giving him his own place. Unfortunately, this sudden attempt to shed humanity feels contrived and one wishes the character had been fleshed out more thoroughly.

Lim has crafted a captivating human story that is one of the most evocative local theatre offerings we've seen this year. The best stories are sometimes the simplest ones, capturing real people in their everyday voices. Supervision does this and subtly adds a political slant, nudging us to think about the surveillance culture our society has built itself on. When have we started treating people as objects instead of fellow human beings? Should we give up our autonomy even if it is for our own good? What, then, is left of our humanity?