"Sometimes, I wish I were a Malay or Indian grandmother", an 84-year-old Teochew woman remarks to her grandson in one of the most poignant lines of this play. "At least their grandchildren can speak the same language as them."

Budding playwright Thomas Lim's Grandmother Tongue, which premiered to rave reviews at the Singapore Theatre Festival 2016 and garnered a nomination for Best Original Script at the Life! Theatre Awards, is a play about language - the ability of language to connect individuals across different generations. It is also about the disappearance of dialects, a corollary of Singapore's aggressive bilingual policy from the 1980s which has prioritized the use of Mandarin amongst Chinese Singaporeans at the expense of the dialects spoken by their forebears such as Cantonese, Hokkien or, in this case, Teochew. 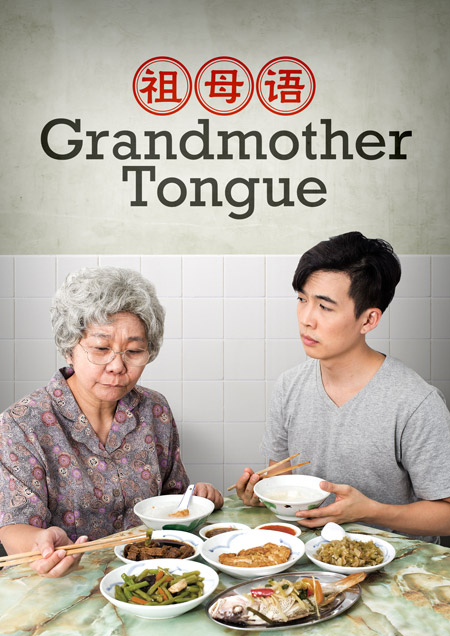 This heartwarming tale of 28-year-old teacher Boon (Tan Shou Chen) and his octogenarian grandmother (Jalyn Han) is drawn from Lim's own experiences and reminds us of the tremendous human cost that comes at the expense of Singapore's relentless pursuit of progress. Here, we gain an insight on a particular class of people who have simply fallen through the cracks: the older, dialect-speaking Chinese Singaporeans who are unable to converse in the nation's lingua franca.

Lim, who also directs, is alive to the power of language in shaping our prejudices and cleverly alludes to this in the opening sequence where the actors speak words and phrases in English, Mandarin and Teochew. When the grandmother declares herself to be Teochew, English surtitles reveal that she is an uneducated woman who cannot speak Mandarin. When the same statement is made by the grandson, we are told that he is an English-educated, Singlish-speaking Chinese Singaporean of Teochew descent.

At one point, the English and Mandarin surtitles which so many audience members are reliant on are switched off and the actors have a go at the government entirely in Teochew. Even as we feel slightly lost, grasping at the occasional familiar word, we begin to understand the cultural alienation felt by the grandmother - a woman who lives in a world where barely anyone speaks her language. In some ways, it's like living in a world of silence as one quietly grows old.

Much of the play centres round Boon's attempts to connect with his grandmother after spending several years abroad and learning to respect her lifestyle and traditional habits. There are hilarious sequences where the pair squabble over the grandmother's cavalier attitude towards the expiry date of foodstuffs and determination to score freebies from the government without paying regard to the fine print.

Indeed, hers is a world of quiet disappointments. The grandmother laments her children abandoning the religion she and her late husband followed, wanting her to embrace Christianity instead. They rarely visit and tell her what is going on in their lives. When she becomes wheelchair-bound after a fall, we see Boon trying his best to care for her, giving her the happiness in her final days that had eluded her for so much of her life. Though much of the dialogue is in Teochew, the humanity of the writing shines through and touches the soul.

The play is also buoyed by delightful performances. Tan's Boon is cheerful and solicitous as the savvy millennial, taking pains to introduce his grandmother to modern technology and mainstream Mandarin in a bid to allow her to enjoy more of the world around her. He is ably matched by theatre veteran Jalyn Han who convincingly inhabits the guise of a sprightly and utterly endearing woman in her eighties, one whose traditional ways do not mask her strong maternal instincts and desire to ultimately do good for her family.


Rounding out the cast is the versatile, impressively trilingual Rei Poh in a wide assortment of supporting roles which range from a fierce Chinese discipline master to a chatty Filipino nurse. He is especially memorable as an ineffectual government official who advocates the use of Mandarin as a community centre event even though he can barely speak the language.

CK Chia's simple, symbolic set underscores the gulf between the two worlds represented by grandmother and grandson. One side on the dining table is traditional and round with jade-like surfaces. The other is modern, sleek and white. The two surfaces sit uneasily with each other but they hold the same food that nourishes the soul.

Grandmother Tongue is a powerful reminder of the many stories that remain untold in the tapestry of Singaporean life. Why should we only concern ourself with the tales of the majority? Is there any utility in championing a world where everyone speaks a colourless single language without having any appreciation of their ancestry? It's time we made an effort to rediscover our roots.