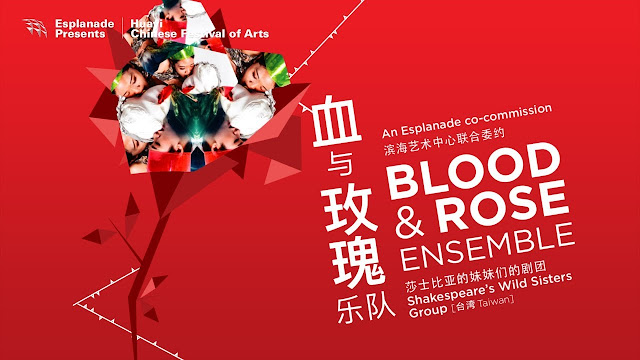 It's clear that the purpose here isn't to present a serious retelling of English history; what's played up instead is the melodrama of the whole affair. The scheming, power-mongering and marriages of convenience are portrayed with the air of a soap opera.  Each successive war is a parody of the one before, the same two actors going through stylized fight sequences with hardly any variation apart from who gets killed in the end. Wang incorporates the traditional Chinese tradition of shuang huang, where an actor speaks words which are mimed by another person, as a clever means to suggest how many of these characters are puppets, buoyed by the machinations of those around them.

Wang mixes old and new styles freely and seamlessly integrates pop-culture references, live songs and social media elements into the action. At various junctures, the actors provide instant reactions to events unfolding onstage in the form of dialogues which are superimposed on the surtitle screen. The audience is implored to take as many photos as they please and the cast themselves constantly record and photograph each other. It's a brilliant reminder of the world of constant surveillance we live in and how history is constantly being created even as it is enacted.


The staging echoes this. The audience is seated in four separate quadrants around a series of runway stages that zig-zag across the middle of the theatre. All sound effects are produced live by a talented and energetic ensemble cast who directly respond to the crowd, immersing viewers fully into the action.

We get a relatively decent account of the family feud but pivotal moments of the plot are sidelined and reduced to sweeping caricature. The cruel taunting of Richard, Duke of York (FA) by Margaret of Anjou (Angie Wang) with a white handkerchief stained with the blood of his son feels little more than a comic interlude and one can barely conjure up the strong feeling of pathos the scene usually engenders. The era of Richard III, that most dastardly of villains who schemes his way to the throne, is glossed over in mere minutes.

The production packs in an awful lot and it's not always clear what the message is. We get a sense of the relentless tide of history with voice-overs giving us a chronological account of the happenings in the court as the years roll by. There is an attempt to link the senseless violence of the era to the hopelessness of our modern times. Interestingly, the narrative makes women out as the ones who seek to consolidate their power, sometimes being thwarted by the men around them; it does not escape one's attention that two of the three key monarchs are played by women. The action starts off with the clairvoyant Joan of Arc who is burned at the stake for witchcraft and ends with an ambivalent scene of five modern women feasting by a winter fire - is this meant to suggest women finally being a master of the flame instead of the other way round?


The cast constantly break the fourth wall and dip in and out of the action. This sometimes works well; when the 'camera' isn't on them, they simply decide that it's not necessary to act. However, it can veer into gratuitous territory. At one point, the cast decide to ring Michelin-starred restaurant Labyrinth to order takeout and then stand in a huddle, eating. A dead character lying onstage repeatedly wakes up for food and then assumes his lifeless posture. The whole charade goes on for far too long.

There's no denying that Blood & Rose Ensemble is an arresting interpretation of Shakespeare, giving the usually staid English history plays a zany edge and irreverently drawing parallels to the world we inhabit. It's a great introduction for audiences not familiar with the intricacies of the vast and varied characters in the original text. But are we just entertained without being truly enlightened?